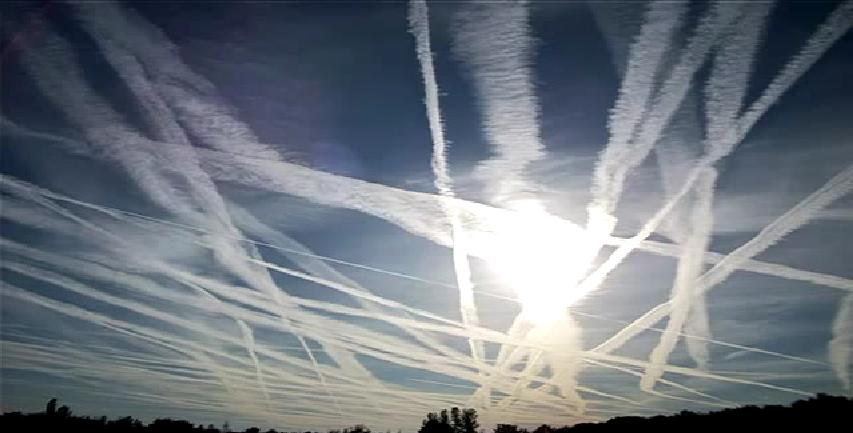 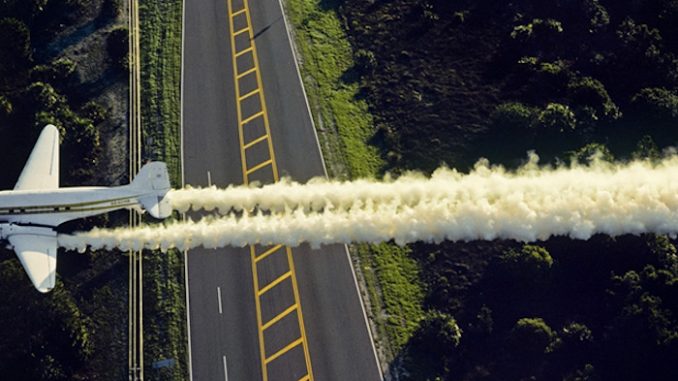 Geoengineering researchers claim that synthetic DNA is being sprayed in our skies as part of a plot to mutate the DNA in humans and animals.

Scientist have already detected dangerous chemicals such as aluminium and barium in chemtrails being sprayed across our skies.

But now, scientists claim to have found evidence of dry red blood cells and GNA – a man-made synthetic version of DNA.

Thetruthrevolution.net reports: This GNA is reportedly entering the bodies of Humans and Animals, using Nano Technology and changing the DNA of Humans and our Animals.

Just like the old science fiction movie, Invasion Of The Body Snatchers, the GNA is ‘Replicating and Replacing’ our regular Human Cells with, God knows what!

This is happening with the compliance of World Leaders. Yes, we know it’s hard to believe. Look and listen and judge for yourself.

From Chemtrails to Pseudo-Life: The Dark Agenda of Synthetic Biology

*Reference to Barium in the HAARP patent report:

“It has also been proposed to release large clouds of barium in the magnetosphere so that photo ionization will increase the cold plasma density, thereby producing electron precipitation through enhanced whistler-mode interaction.”

Watch what in the World Are They Spraying? On Youtube.

By now everyone has seen crisscrossing streaks of white clouds trailing behind jet aircraft, stretching from horizon to horizon, eventually turning the sky into a murky haze.

Our innate intelligence tells us these are not mere vapor trails from jet engines, but no one yet has probed the questions: who is doing this and why. With the release of this video, all of that has changed.

Here is the story of a rapidly developing industry called geo-engineering, driven by scientists, corporations, and governments intent on changing global climate, controlling the weather, and altering the chemical composition of soil and water — all supposedly for the betterment of mankind.

Although officials insist that these programs are only in the discussion phase, evidence is abundant that they have been underway since about 1990 — and the effect has been devastating to crops, wildlife, and human health.

We are being sprayed with toxic substances without our consent and, to add insult to injury, they are lying to us about it. Do not watch this documentary if you have high blood pressure.

As parents in Sacramento County, Calif., put their kids to bed on Monday and Tuesday night, a pair of planes flying overhead doused a 30,000-acre area with a fine mist of pesticides. The target of the repeated aerial assault: mosquitoes.

A growing number of the pests harbor the West Nile virus, officials say, but some residents and environmental health advocates fear the risks of exposure to man-made chemicals — cancer, delayed brain development, hormone disruption, respiratory problems — may outweigh the danger of the disease.

West Nile, transmitted through the bite of a mosquito, usually triggers only mild flu-like symptoms. On rare occasions, however, it can prove deadly.

“The cure is worse than the disease,” said Kim Glazzard, director of the nonprofit Organic Sacramento.

“You’re spraying poison over thousands of people for the potential of maybe helping a handful of people. And kids are especially susceptible.”

A similar argument is currently being voiced in other parts of the country including Boston, New Orleans and Mobile, Ala.

Officials there also are responding to predictions of more West Nile, in large part because an unusually mild winter and a warm spring have bolstered mosquito populations.

In fact, this is the earliest that Sacramento officials have sprayed since they started the practice in 2005, a strategy researchers later confirmed had lessened the burden of West Nile in the community.

“We’ve already found a lot of West Nile virus in dead birds and mosquitoes this year. We usually don’t see this until August,” said Luz Rodriguez, a spokesperson with the Sacramento-Yolo Mosquito and Vector Control District, which supervises the spraying.

“We felt it was necessary to move forward quickly to reduce the number of adult mosquitoes to protect public health.”

Two different types of pesticides made up this year’s treatment: Anvil, a synthetic pyrethroid, and Dibrom, an organophosphate. Less than an ounce of each was applied to every acre, costing the county about $120,000 for two nights of spraying.

More spraying may be necessary if West Nile lingers, noted Rodriguez, adding that the district employs non-chemical strategies to help prevent West Nile infections as well, including educating the public about the use of repellents and distributing free mosquito larvae-eating fish.

Both of the sprayed pesticides are registered for use in mosquito control and were applied at levels below U.S. Environmental Protection Agency limits.

“This is a surgical strike against mosquitoes. It really only targets mosquitoes flying at night.”

Confident that the pesticide usage is safe, county officials did not tell residents to take precautions during the spraying.

“Generally, there is no need to relocate or stay inside,” said Rodriguez.

“If it makes people feel more comfortable, they can close windows or cover furniture. But there’s no list of specific recommendations.”

However, that does little to ease the concerns of environmental health experts and advocates, who point to known risks from tiny doses of certain chemicals, potential long-term effects, and the unknown risk of cumulative exposures to multiple chemicals.

“The chemicals they are using are not benign,” said John Wargo, an environmental health professor at Yale University. “They are both known to be toxic by different routes.”

Pyrethroids are known endocrine disruptors, a class of chemicals that researchers have recently found can mix up critical hormonal signals even at extremely small amounts.

Another ingredient in Anvil, added to boost the effectiveness of the pyrethroid on insects, is called piperonyl butoxide (PBO).

The chemical, according to a study published in Pediatrics can disrupt brain development in the womb, as well as interact with other pesticides in the environment to increase their toxicity.

PBO is listed among the top 10 chemicals in indoor dust, a significant route of exposure for young children.

Organophosphates also can be inhaled, absorbed or tracked indoors — and may be even more concerning for human health. The class of chemicals was originally developed as a weapon during World War II. Dibrom’s manufacturer describes it as a possible carcinogen.

“They made a really dramatic step this year by using an organophosphate … This is pretty bad stuff,” said Glazzard. “With increased toxic load in the environment already, we are sitting ducks for cancer in the future. More and more children are getting cancer at much earlier ages.”

Many of these effects wouldn’t be noticed for years, even decades, which experts suggest is why some toxic chemicals may slip through the regulatory cracks.

For the most part, the answer is unknown.

Some say the aerial spraying may not really curb the spread of West Nile. It potentially could poison birds and insects that naturally decrease mosquito numbers, said Wargo, or spur resistance to the chemicals, requiring more or stronger pesticides to maintain the same control.

According to Rodriguez of the Vector Control District, her team did use an organophosphate for the first time this year for “resistance management.”

“We are the experiment,” said Glazzard, who lived in the district’s spray zone a few years ago. “We don’t want to be experiments anymore.”