Have No fear Freedom is Near 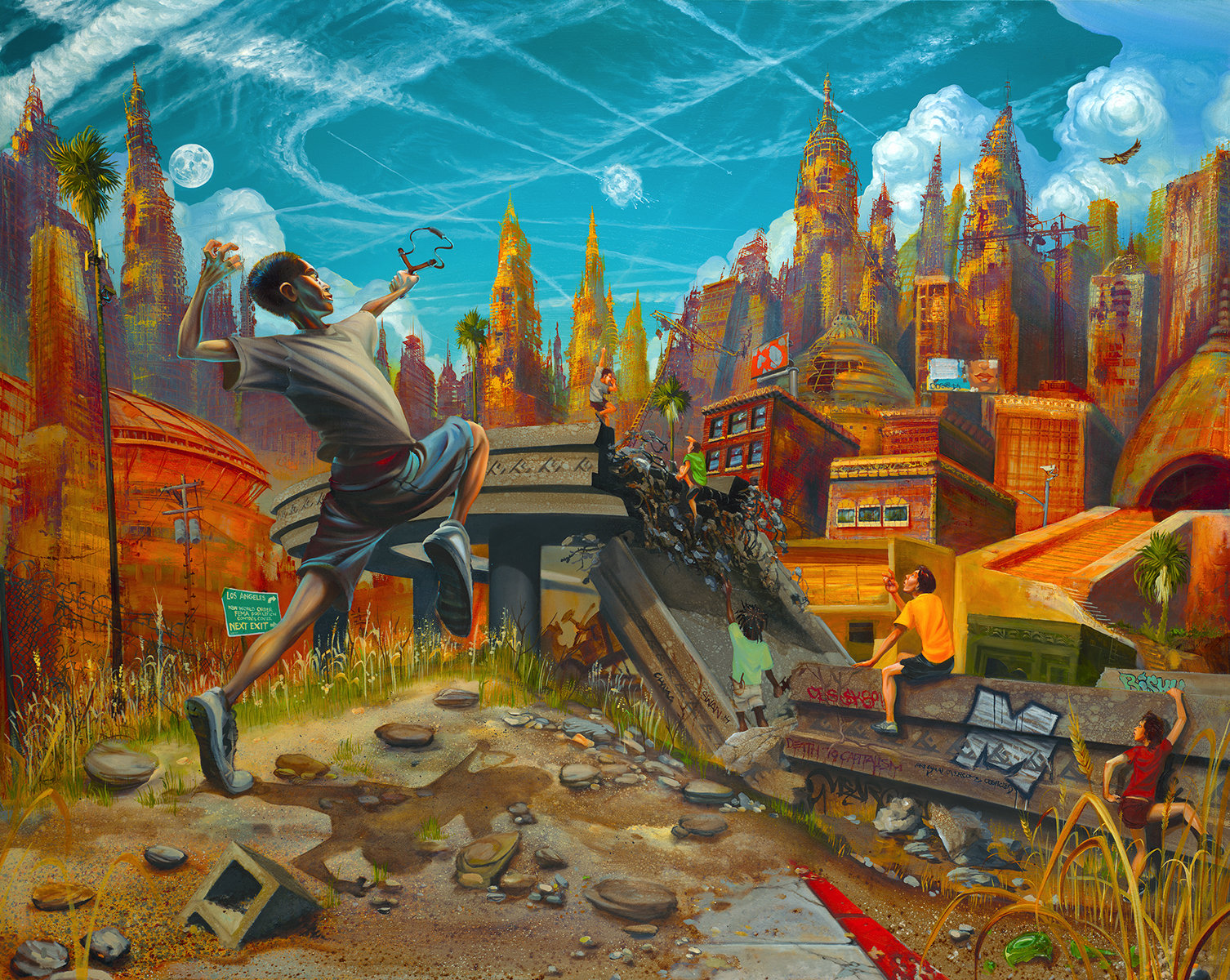 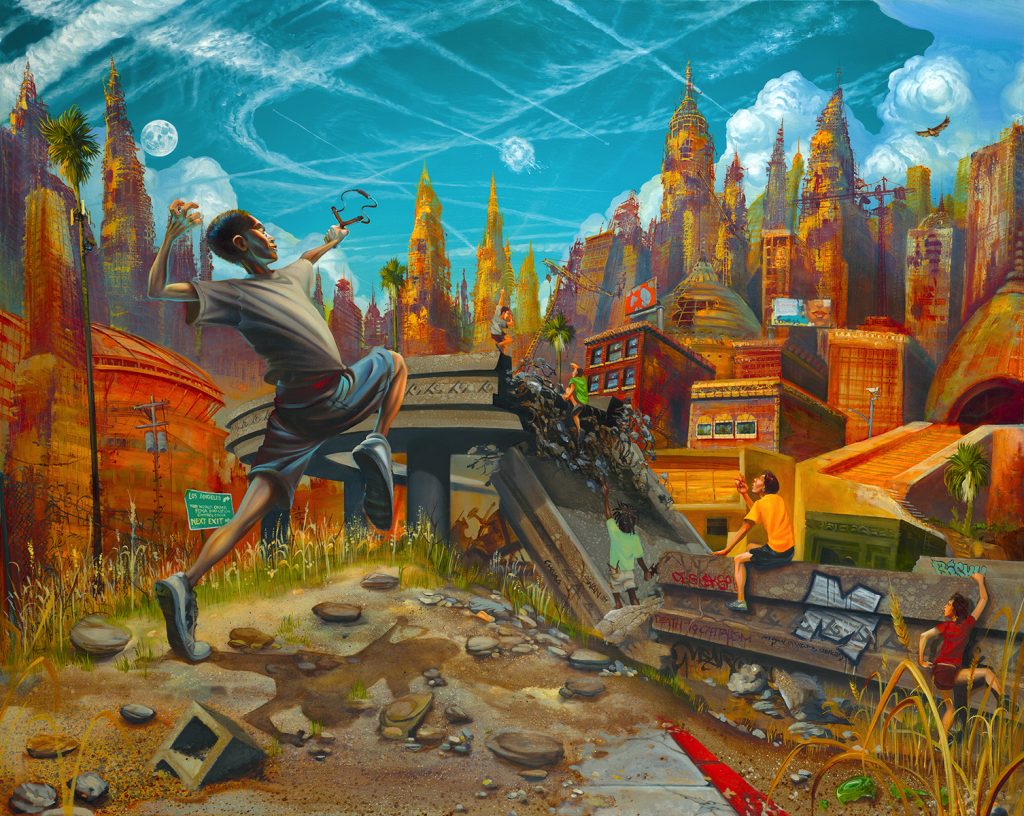 Well, hopefully we haven’t scared too many people away with MearOne’s fabulous painting titled David and Goliath. Here it is in its glory outside the frame of our cover, dystopic scene intact, with chemtrails and finger-flipping, and a much clearer view of Davids’ slingshot finding its impossible mark high in Goliath’s geoengineered skies.   MearOne knows of what he paints, coming out of California to share his beautiful and poignant work with us all.   Heck, anyone with their heads out of their backsides is only too familiar with those trails polluting the blue of heaven and scumming over the Sun’s light.

As I’ve experienced it the entire West-Coast of Turtle Island (America) has been bombarded almost nonstop for as long as I can remember; the rest of the world I’ve visited as well, but we’ve had it bad here for a while.   I can happily and personally report great strides in countering and dissolving the evil machinations of those who’ve alienated themselves from Natural Intelligence and the Consciousness of Love. I know it occasionally looks like the buggers are ‘winning’ but don’t believe the hype: it’s theirs after all.   I joyfully refer you all back to Sharon Daphna ‘s excellent article and adventures with orgonite Ending the Engineered California Drought featured in last month’s New Agora issue. Great heroic stuff. Practical too. With her instruction a team of us have been hard at work doing what we can here in Canada, literally ‘making’ the sky blue and sending them stink clouds of filth right outa’ here. Yahoo! Most fun I’ve had in a while. Makes taking a walk out in the World an amazing and magical experience.

But it’s to the rest of the lost and occluded ones that I refer whereas being afraid of some of the images, and the truths they illustrate, truths that we so happily showcase here on our covers.   Cognitive Dissonance ain’t much fun for anyone. Lobotomizing one’s consciousness in the hopes that the old saying ‘ignorance is bliss’ works out for them while Roma burns…well, heavens…just keep fiddling folks maybe you’ll get there.

The reason I mention it now is because each time we’ve brought out a cover image someone’s lost their minds to preprogrammed ‘offence’, or been somehow touched and tickled on their cognitive dissonant wound. Of course at times it’s our articles that do the job, Anarchy vs. Minarchy sent one of our former agoran associates scurrying back to the darkness of their comfort zone, as did May’s image of Mother and Child holding up their fists in solidarity with humanity’s r’evolutionary spirit. For shame, I say! How comical too.   Had I not seen the same thing happen when we dared show a nipple…well, you get the picture.   A nipple! How shameful! How hilarious!   Lost in endless folly indeed.   It’s on par with being asked if chemtrails are real. And the same folks have, I might add, to which I must answer: my dear sirs and or madam or whatever in-between: they are more real than you, obviously. Perhaps try participating with Consciousness? Awareness is a beautiful experience, kinda hard to get by without it, shocking when people think they can, dangerous too.  Still, makes for a good story.

I’m easily reminded of the dogged and drooling insistence of my own family’s blindness and their downright hostility to myself and this same subject matter (among many others). My attempts to clarify this amazingly obvious and daily event, as big as the sky one might say, met with the astounding stubbornness of the criminally insane.   The willfully ignorant stand as testament to the power of sheer human stupidity and fearful, selfish living, but I doubt they will be able to do so for much longer, that’s government approved quicksand they’re burying their heads in after all.   Ay, caramba!   What a spectacle! It’s one thing to believe in Darwin’s callous theory, quite another to make it true by sacrificing one’s life like a Lemming.

Guess what folks? They lied to us all. We are actually Luminous Beings powered by limitless imagination connected directly to the Source of Creation here to experience the endless beauty and mystery of Existence. Or we’re meat machines here to consume everything and to reproduce the sickness of an alien dream bent on the total destruction of Life everywhere.   Hmmm, tough choice there. I’ll leave you to it shall I?

Certainly there are degrees or shades if you prefer, to waking up, to consciousness itself: ya gotta have somewhere to go, no?   I hear there’s ever more and further to experience whereas growth is concerned.   Lucky us!   And even with the cognitively challenged there’s always a chance for change as well.   My beautiful mother proved this to me on many an occasion when she tossed out what she previously held as being so for what was in actuality true. Thanks Mum!

That’s the great part about what the Overshmoes (powers-that-be, etc..) are doing: First off, evil is self defeating by its very nature, all it does is fight against itself, selfishness really is the root of evil, as much as separating oneself from the All of Everything is pure madness; Secondly, by so thoroughly demonstrating their desperation to keep us all down and ‘on the farm’ all they’ve managed to do is shine the high powered spotlight of Truth on themselves and their nefarious activities.   Thanks guys!   We couldn’t be free without your help.   They gotta hate that.   Ha!

Sure there’s a lot of good work (Play really) to get to for us all, lots to heal, rebalance, fix, etc…so much really it boggles one’s mind.   But just give yourself a minute to notice how far we’ve come!   And don’t stop there my friends: give yourself an even longer moment and imagine what this World is to become free from the shackles that have bound us for so long, a World (Worlds really) now free to accept our loving touch to create Ourselves anew, to open wide the doors of possibility and splendor, guided in part by the lessons of the past in what not to do, what not to be, yet wise and grateful for having had their experience, cuz nothing teaches better than experience in the school of Life. But I’ll tell you a secret: it’s only a school if you need it to be; for me it’s endless play.

So be of good cheer Freedom is near, blue skies and fluffy clouds too.