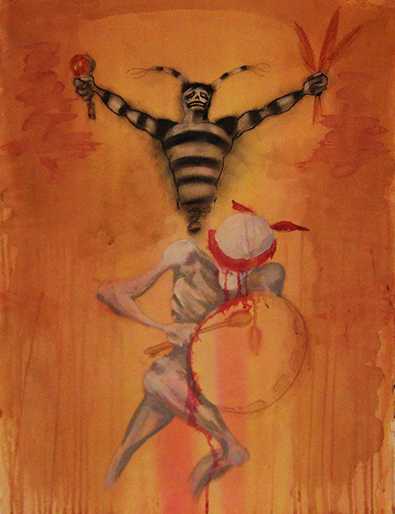 In a world drowning in religion but thirsty for spirituality, the sacred clown archetype, more specifically the Heyoka archetype, is the panacea of our time. It’s the vital force of nature that can provide the magic elixir we need to heal our profoundly sick society.

When outdated gods need to die, our inner Heyoka is just the energy we need to get past the fortified ramparts of our cognitive dissonance. Heyoka energy is ruthlessly contrarian. It strikes at the roots of culture though merciless high humor.

When a culture is healthy, such energy is easily absorbed, painlessly reconciled, and brought into harmony. But, when a culture is unhealthy, as ours is, then such energy is a profound shock, a difficult and painful awakening that shines a spotlight on our sickness and forces us to deal with the cognitive dissonance regarding that sickness.

We can tap into our own Heyoka energy by counting coup on culture and producing a destiny of our own. We can use this energy to turn the tables on the profoundly sick society that surrounds us while also creating a healthy balance.

The Heyoka archetype is courageous but not obedient, humorous but not comedic, fierce but not violent. It has the cross-cultural capacity to flip scripts, flatten boxes, and stretch stifling comfort zones. And it has never been more imperative to our health as a species, as a global tribe, than it is right now.

1.) Courageous but not obedient:

Heyokas of old were the checks and balancing mechanism of a healthy tribe. Nobody was more free than a Heyoka. They were walking, talking, clowning, countervailing power constructs. They were cultural leveling mechanism par excellence. They were forces of nature first, humans second. They poked holes in inflated egos. They questioned all authority figures through direct and indirect humor. Their only obedience was to civil disobedience itself.

They didn’t need permission to challenge cultural values. They sunk their teeth into fixed values, all at once revaluating all values. They were the personification of counting coup. They counted coup on the tribe every day through the brilliance of their contrarian humor.

We need such energy today. Our zeitgeist needs a spiritual awakening, an existential overhaul. Our modern global tribe needs a force of nature to counter its anti-nature sickness. Such courage can only come from a force from within that is not tainted by the sickness; a force that can see around the small picture perspective of cultural conditioning and take in the big picture perspective of a much-needed cultural reconditioning. That force is our own inner heyoka archetype.

The old archetypes simply won’t do, even in combination. The Heyoka archetype is like a combination between the Jungian Hero, Shadow, Trickster, Wizard, but it is also so much more. It is also anti-heroic, overt, and amoral in its agency. It tricks even the trickster with its blatant ability to go beyond good and evil, transcending cultural modes of rightdoing and wrongdoing.

2.) Humorous but not comedic:

In a world of bleating Betas and braying Alphas, Heyokas transcend the lot by becoming howling Metas.

Our inner Heyoka is always seated at a great table for play and mockery. It’s the only archetype that can bluff God and the devil at the same time. It does it through the use of nonchalance and high humor. It is never serious, but it is always sincere. No low humor here. No slapstick comedy for comedy’s sake. No. This humor is high because the stakes are high.

Heyoka humor is a sword of truth that cuts through all false narratives. It’s a beacon of darkness in the blinding light just as it is a beacon of hope in the darkest night. Such humor dices up Hate into digestible pieces of compassion. It recycles anger into biodegradable passion. It cuts through the thickness of existential angst revealing thin layers of laughable fate. It burns without being burnt. It guilts the gelded and the glutted.

Heyoka humor is humor that resonates between worlds. It’s a deep laughter that slips through the cracks of the soul. It slips through the broken places of the heart and creates lightheartedness. It reminds us that we are both worms and gods, tragically mortal and yet comically transcendent. It mocks all self-seriousness and half-measures. It’s a monkey wrench leveraging holy shrines into monkeyshines.

Heyoka humor is not pretend humor. It’s radical humor. Unforgiving and unconditional in its absolution. It is beyond resentment. It is beyond sentiment. Indeed. Pity is poison for a Heyoka, and so the Heyoka practices a walking state of radical humor that subsumes forgiveness. Like the way a Zen monk practices a walking meditation. It is precisely this type of humor that we can use to count coup on our culture and create a world that is less codependently self-serious and more interdependently sincere.

3.) Fierce but not violent:

“The art of life is more like the wrestler’s than the dancer’s; it should stand ready and firm to meet onsets which are sudden and unexpected.” ~Marcus Aurelius

Heyokas of old were feared just as much as they were revered. They were just as likely to make you sweat as to make you laugh. Their fierceness came from their ruthlessness. They were compelled to maintain balance, even if that balance came at the expense of people’s comfort.

Comfort was anathema to a practicing Heyoka. Comfort meant laziness, and a lazy tribe soon became an unhealthy tribe. It was the Heyoka’s job to make sure their tribe didn’t become so comfortable that it became unhealthy. They did so through the fierceness of high humor.

As it stands today, we live in fundamentally unhealthy societies rampant with too much comfort and laziness. Especially when it comes to balance, harmony, and interdependent (as opposed to codependent) spirituality. Our societies are so profoundly sick that we ignorantly pollute the air we breathe, the water we drink, the food we eat, and the minds we think with. This is due in large part to overly comfortable and lazy lifestyles that are codependent upon excess creature comforts at the expense of Truth and Health.

Something has got to give. And modern Heyokas—that is, individuals who have tapped into their inner Heyoka archetype—are the ones drawing a line in the sand and taking leaps of courage out of culturally-inflicted comfort zones. They are determined to make a difference. This will require fierceness against excessiveness. This will require a ruthless force of high humor in the face of the unhealthy lifestyles that are destroying the world.

But Heyoka energy is not violent. Life is both too precious and too laughable for violence. The human condition is too fleeting and utterly mortal for violence. Indeed. The universe is already violent enough. Thus, the Heyoka archetype, ever a bastion for balance, ever a stronghold for harmony and survival despite entropy, is fundamentally at odds with violence except in defense of balance, harmony, and survival. Irony is Heyoka’s copilot.

At the end of the day, Heyoka counts coup on culture by counting coup on violence itself. The profoundly sick societies we live in are excessively violent. They violently effect the health, harmony, and balance of the human tribe by poisoning that which the human tribe needs to survive.

We need the Heyoka archetype now more than ever. We need its fierceness, its courage, its high humor. We need it to adapt and overcome. We need it as a cure for our current sickness. When the tribe fails to regulate itself, Heyoka must regulate the tribe. So, Hoka Hey! Hey Hoka! Regulators mount up! Today is a good day to die.

Heyoka and The Skeleton Drummer by Andre Peraza

This article (Heyoka As Archetype: Counting Coup on Culture) was originally created and published by Self-inflicted Philosophy and is printed here under a Creative Commons license with attribution to Gary Z McGee and self-inflictedphilosophy.com. It may be re-posted freely with proper attribution, author bio, and this statement of copyright.