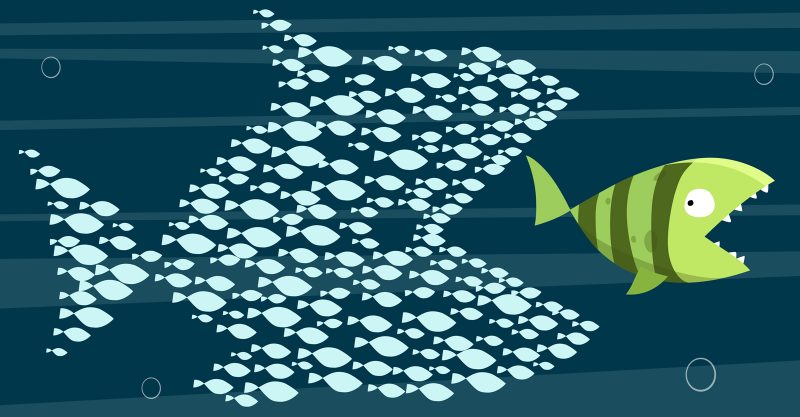 The solutions to corporate monopolies begin by acknowledging there is no such thing as a market without rules.

Americans love freedom … and who doesn’t? To be happy, most of us need a sense of agency and abhor the thought of Big Brother looking over our shoulder.

But for many Americans a defining notion of freedom is being “free to choose,” a phrase made famous as the title of the 1980 book by Milton and Rose Friedman.

Much earlier, Milton Friedman’s “Capitalism and Freedom” in 1962 tethered such freedom to a particular economic system — unbridled capitalism.

It sounds like common sense. Freedom means choice in the market, and we’ve bought it — literally and figuratively — often blinding us to the obvious: Such freedom is conditional. It is real only when markets offer us numerous options, and we have enough income to seal the deal.

Unfortunately, both conditions are threatened, even ripped away, when a handful of corporations dominate whole sectors of our economy and then use their power to gain political advantage.

Way back in 1890, our federal government confronted such a freedom-killing market — then dominated by “robber barons” such as John D. Rockefeller and Andrew Carnegie. Passing the Sherman Anti-Trust Act, Congress began to rein in anticompetitive practices, including price fixing.

So, by the 1960s both Democratic and Republican administrations prosecutednumerous antitrust cases.

Sixty years later, though, not so much.

By the 1970s, big business felt threatened by social justice movements — from racial equity to anti-war — challenging the overweening power of corporations. And in 1971, a worried Chamber of Commerce commissioned corporate lawyer Lewis Powell to produce the now-infamous Powell Memo.

With strident prose, he called for defense of the “free enterprise system” that “faced broad, shotgun attack.”

In the 1980s, the Reagan Era continued identifying public power as the threat, effectively diverting attention from the dangers of concentrated private power. Reagan’s inaugural address set the tone: Government “is not the solution. It is the problem,” he famously declared.

Reagan aligned with what is known as the Chicago School of economics, identified with Friedman and generally opposed government rule-setting, including those to keep markets open.

From 1982 to 2012 every sector of our economy became more monopolistic, according to the HHI Index — a standard measure of market concentration. Worst? The retail market, where concentration tightened more than five-fold.

Then, tech giants pioneered a new path to monopoly power observed Paul Gleason in the Washington Monthly in 2020. “They gather tremendous amounts of information about their users and then use that information to offer different users different deals depending on their individual habits,” wrote Gleason.

This data enables strategic marketing and pricing allowing them to squeeze competitors out of business.

“Amazon, Facebook, and Google have, in a way, brought feudalism back. All of us, whenever we use their websites, create the data that makes these companies rich,” he argued.

So, Gleason concluded, consumers become “uncompensated producerswhenever we are surfing the Internet.”

In addition to their power over prices, monopolies determine the fate of workers. With ever fewer competitive companies, workers lose bargaining power.

“Wages across America today are 20% or more lower, relative to the economy as a whole, than a generation ago,” notes Barry C. Lynn, head of Open Markets Institute. Why? “Monopolists have exploited their power to drive these wages down,” he writes.

Beyond monopoly’s power to limit our freedom to choose and earn a fair wage, our freedom is also compromised by such power within our political system.

The influence of corporate monopolies leads to “privatization deals, natural resources given away below fair value, corrupt public procurement, or tax exemptions and loopholes.” All are avenues through which “well-connected private interests can enrich themselves at the expense of the public,” concludes Oxfam’s 2018 Reward Work, Not Wealth.

“Monopolism, cronyism and inheritance together account for two-thirds of the world’s billionaire wealth,” finds Oxfam.

So how can we break free of the mythology of the free market to create a fair economy?

Solutions begin with acknowledging there is no such thing as a market without rules.

Currently, the primary “rule” of our economy is: Do what brings highest return to existing wealth. So wealth accrues to wealth, accrues to wealth to the point that our nation suffers greater economic inequality than more than 100 others, ranking between Bulgaria and Peru, according to the World Bank.

Letting go of the mythology of a free market, we gain trust in our common sense and experience.

In the early 1980s, I got to debate Friedman on stage at the University of California, Berkeley, and all I recall is this: “Mr. Friedman,” I said, “if you are correct that capitalism’s great virtue is freedom to choose in the marketplace, then the more widely and equitably spread purchasing power is, the greater the freedom.”

So how do we create such equity making “freedom to choose” a reality?

We work like crazy to unlock the control monopolies hold over our government, our workers and our daily lives. Here are some big but obvious steps:

Limit the power of lobbyists. Today in Washington more than 20 lobbyists represent mostly corporate interests for every person we elect to represent us. In 2021, the U.S. Chamber of Commerce alone spent $66 million on lobbying.

End the power of money in elections that makes lawmakers beholden to private interests. Substantial public funding is used in many democracies including Finland, Germany, and Brazil. In Germany, the public, along with party membership fees, covers two-thirds of election costs. So elected representatives aren’t beholden to large private donors.

Remove obstacles faced by the labor movement, now representing just over 6%of private sector workers. A start is upping the minimum hourly wage. It would be $26 today if it had kept pace with inflation.

Protecting union organizers is also urgent. Major U.S. companies, such as Amazon, strive to prevent their workers from unionizing. Most recently, Starbucks workers in Memphis filed a case with the National Labor Relations Board charging they were fired for their organizing efforts.

Plus, right now, the Senate can pass the Protecting the Right to Organize (PRO) Act approved by the House last year. It would both expand labor protections and punish employers who try to prevent workers from organizing.

Government can also enhance fairness by offering citizens avenues for reporting harm caused by monopoly power. To that end, our Department of Justice and Department of Agriculture just launched farmerfairness.gov — an online tool farmers and ranchers can use to report “potentially unfair and anticompetitive practices in the livestock and poultry sectors.”

Oh, there’s so much we can do.

Once shedding free-market mythology, we can step up as citizens to shape a culture of fairness that could indeed make us free — or at least free-er — to choose, and in the process create economies that enhance life and human dignity.

Originally published by Common Dreams. Max Boland contributed to the writing of this article.