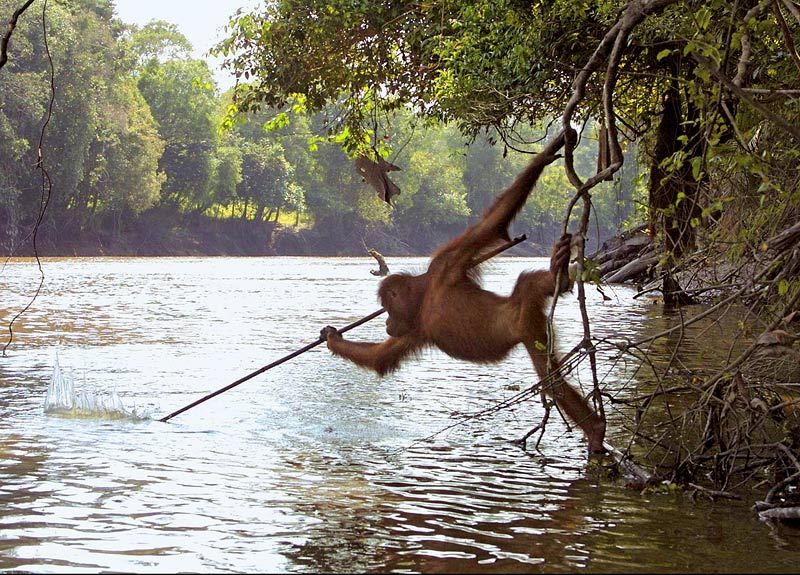 Primates are extremely intelligent creatures, but humans can sometimes forget how similar we are. One of the most iconic photos ever taken of a primate shows an orangutan hunting for fish with a makeshift spear, using very similar techniques as a human would. The image was captured by Gerd Schuster, who co-authored the book “Thinkers of the Jungle: The Orangutan Report.”

The photo was reportedly taken in Borneo, Indonesia, on the island of Kaja. Schuster says that the animal observed locals fishing with spears in the Gohong River, and began to replicate their techniques. Eventually, the animal was able to improvise and find a strategy that worked for him, hanging down from a tree and then using a stick as a spear to strike the fish in the water.

The animal was even smart enough to seek out the lines that were set up by the fishermen, which made the task even easier for him.

The authenticity of this photograph was confirmed by Michelle Desilets, executive director of the Borneo Orangutan Survival Foundation (BOS) UK, who said, “I can confirm that the photo is authentic. It is also backed by the BOS Scientific Advisory Board, including Dr Anne Russon who has done extensive studies of the orangutans on this island. The behaviors including spearfishing and swimming on these islands is not uncommon, and are almost certainly learned behaviors as they have not been seen in wild populations. “

This is not the first or only time that something like this has been captured in photos or videos. More recently, also in Borneo, a wild orangutan was observed helping a man who was wading through snake-infested waters.

An amateur photographer named Anil Prabhakar was on a safari with friends at a conservation forest run by the Borneo Orangutan Survival Foundation (BOS) when he witnessed the scene. Prabhakar was able to capture a photo of the moment, which showed one of the island’s critically endangered apes extending a hand to help a man out of unsafe water.