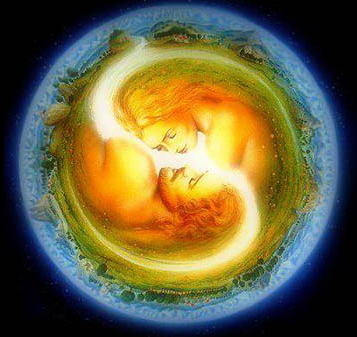 Man (“male” or “female”) lives in a reality governed by the Law of Polarity. This type of reality is unique because it allows the manifestation of positive and negative experiences. These experiences are great for teaching the souls/spirits of men to transcend dynamic life lessons, so they can evolve into enlightened beings.

In order for you to know yourself at the deepest level of your being, you need to experience the expressions of the divine feminine and divine masculine energies, so you can grow spiritually and expand your consciousness, allowing you to “innerstand” good and evil.

The problem with humanity is that most of us have forgotten who we really are and lack the commitment of personal responsibility. Because of this, the divine feminine and divine masculine energies have become heavily unbalanced, causing “sickness” and destructive ideas to manifest in the energy fields of our collective body (Earth).

The divine feminine and divine masculine energies play essential roles in your life, because when both of them are working and dancing together in a harmonious way, they allow you to innerstand life better. When you acquire enough knowledge and experience to merge both of these two divine energies in a harmonious way, it allows you to achieve true spiritual enlightenment and intelligence. Because of this, learning how to balance the divine feminine and divine masculine energies is the key to spiritual enlightenment.

What Is the Divine Feminine Energy?

What Is the Divine Masculine Energy?

The Fundamental Cause of Human Suffering

Throughout human history, many stories in religion have warned us about the dangers of not living in harmony with nature. One of those stories involves the characters Adam and Eve. As described in my enlightening book titled Word Magic: The Powers & Occult Definitions of Words (updated version):

In certain teachings of the occult world, Adam represents the sun god Atum and Eve represents the Moon. Throughout human history, the Sun has always been associated with the divine masculine energy and the Moon and the Earth have always represented the divine feminine energy.

At the deepest level, the biblical story of Adam and Eve is nothing more than a story of the two creative forces of polarity and why those two forces are constantly fighting and making love with each other, similar to what people do in an intimate relationship. This process of fighting (expanding) and making love (contracting) allows the manifestation of negative and positive experiences. The knowledge and experience gained from those experiences teach the two creative forces of polarity to achieve a state of balance and harmony.

Once you innerstand the occult (hidden) meanings of the story of Adam and Eve, you will eventually know that it is a story of the two creative forces of polarity and their magical journey to achieve a state of balance and harmony. Hence, the story of Adam and Eve, the Sun and the Moon, the sperm and the egg, the conscious and the subconscious, the light (“good”) and the darkness (“evil”), the positive and the negative, the divine masculine and the divine feminine, etc.

During the ancient times, there were some secret societies and civilizations that worshiped the Moon. Back then the name Sin was used to call the Moon. To be more specific, Sin was the name of an ancient moon goddess. Today, we live in a world ruled by secret societies controlled by mostly men. These male-dominated secret societies have brainwashed most of us to worship the divine masculine energy (Sun/Jesus/Lucifer). To prevent us from worshiping the Moon and mother Earth, they tell us that we were “born in sin” and therefore if we want to be free from sin (the Moon), we need to worship the Sun/Jesus and accept him as our savior.

The main reason why the world is such a mess is because we live in a reality where the divine masculine energy has become so strong and distorted that it has endangered the integrity of the harmonious interaction between the divine feminine and divine masculine energies. The result of this distortion has manifested potentially destructive things to Mother Nature, such as wars, nuclear weapons, transhumanism, artificial intelligence, genetically modified organisms, dogmatic religion, and government.

The path of transhumanism will not lead to eternal life; instead, it will eventually lead to the destruction of the human race. Men and women need to learn how to balance their divine masculine and divine feminine energies, so that they can live in harmony with one another or they will eventually destroy themselves and Mother Earth.

Donate to Help Make a Difference

OmniThought.org is a true independent blog and is free of third-party ads. If you like reading the articles on this site, please take action now by clicking the “Donate” button below to send a donation to the author/editor. Your generous support will help fund his research and expenses, allowing him to continue his quest to educate and teach people to create a better world for everyone.