Is Technology Enabling Human CULLING? The Rise of Genetic Editing Suggests It Is 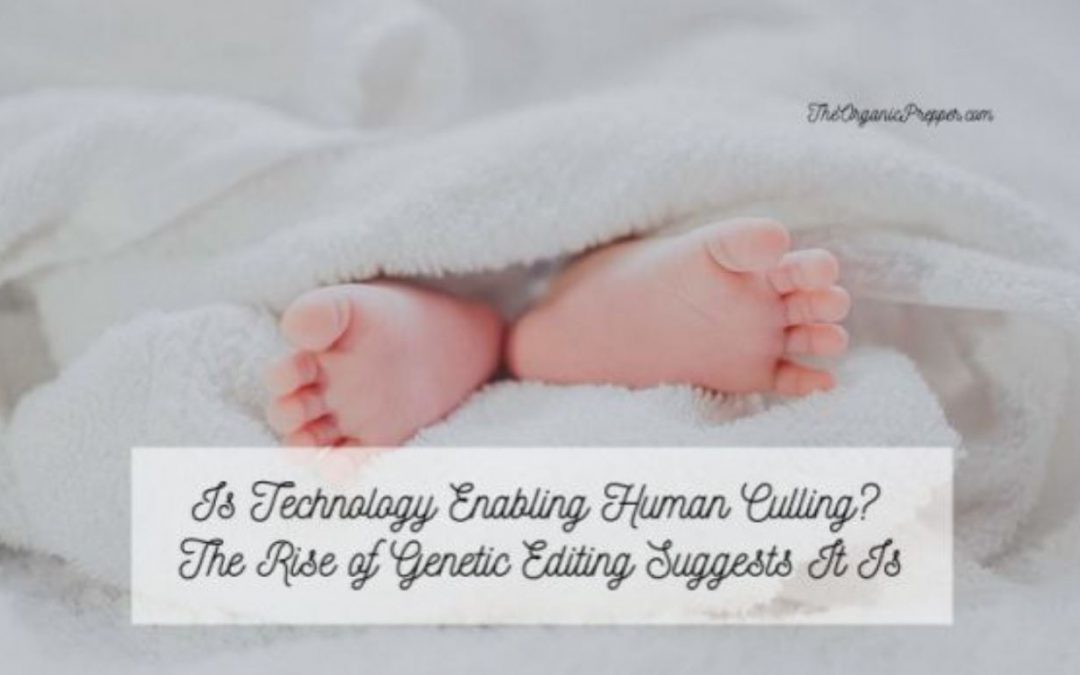 Is Technology Enabling Human CULLING? The Rise of Genetic Editing Suggests It Is

Human genetic editing has become a reality. This terrifying advance in technology comes with high risks to not only those children who are genetically modified (without their permission I might add,) but to the whole human race. The repercussions of such meddling are far-reaching and potentially devastating.

What was once science fiction has now become a confirmed scientific possibility not only within reach, but being practiced illegally in China.

Scientists have discovered how to genetically edit embryos.

At the end of November 2018, Chinese geneticist He Jiankui declared he implanted embryos, that had been genetically modified with the CRISPR-Cas9 technique (Ran et al., 2013; Doudna and Charpentier, 2014), into two women…In January 2019, He was suspended from his university—Southern University of Science and Technology of China, in Shenzhen—and placed under house arrest by the Chinese authorities. (source)

The Chinese geneticist He Jiankui implanted the genetically modified embryos into two women after modifying the embryos in an attempt to make them more resistant to HIV. However, most research says that his experiment is unlikely to be successful. He is unlikely to have prevented HIV in the children and there are a whole host of side effects that come with his meddling, including the weakening of the immune system and risk to vital organs.

The procedure [CRISPR-Cas9 technique] has been the object of much criticism from the strictly medical-scientific point of view: among other things, it has been defined as “misguided, premature, unnecessary and largely useless” (Cyranoski, 2018). On the one hand, guaranteeing only partial genetic protection against HIV, which could also be obtained with other medical methods, the procedure, which has not yet been sufficiently tested, does not seem to compensate for the high risks it entails. (source)

The proponents of human genetic editing cite the possibilities of curing or preventing diseases as reasons to start (or in some cases continue) using the technique. However, genetic editing has yet to be proven as a viable option for disease prevention and the risks are many, dark, and murky. Many believe that genetic editing could be easily abused and even used for eugenics. It could be used for control by selecting only the offspring of the elite to have certain desirable qualities such as strength and intelligence leaving the rest of the population with specifically engineered weakened traits.

Technology is allowing parents to custom design their offspring.

In the meantime, ultrasound and DNA testing are allowing parents to do their own choosing, making having a child seem more like buying a car.

DNA testing paired with IVF is allowing some parents to attempt to have “the perfect child.” Parents are now able to go to a fertility clinic, fertilize several embryos and then choose from among them based on the traits they want their child to have.

This article from the MIT Technology Review describes the test as “23andMe, but on embryos.”

Handed report cards on a batch of frozen embryos, parents can use the test results to try to choose the healthiest ones. The grades include risk estimates for diabetes, heart attacks, and five types of cancer.

According to flyers distributed by the company, it will also warn clients about any embryo predicted to become a person who is among the shortest 2% of the population, or who is in the lowest 2% in intelligence. (source)

So, what if your parents could have thrown you out because you were too short and they wanted a taller kid? It seems far fetched, but it’s not anymore. This could be our new reality and even a form of literal social engineering. If you’ve got the money, you can “engineer” a more intelligent kid or a more athletic kid. The social pressure to have a perfect child via genetic editing could become such that its on par with the American obsession with brands of clothes and the latest and coolest car. A disturbing thought.

The methods used in genetic editing seem a lot like eugenics.

David Keefe, the Chairman of Obstetrics and Gynecology at New York University’s fertility center in Manhattan was interviewed by MIT Technology Review and expressed concern that parents are trying to choose children as if they are picking items from a “menu.”

“Right off the bat it raises all kind [sic] of questions about eugenics,” he says.

Some, including Keefe, who have objected on moral grounds that this kind of testing has gone too far, have used the term “eugenics” to describe the methods being used in genetic editing. It is the selection process of humans for birth based on an arbitrary definition of “the perfect human.” And we are not the first society to try it.

Nazi Germany is a great example of the results of implementing eugenics. Germany under Hitler’s reign famously allowed only “desirable” individuals to live and sent the rest to death camps to be “terminated.” Those undesirables included the disabled and infamously Jews among other unfortunates.

And our generation is not clear of blame.

The potential for Genocide that comes with genetic editing is starkly real. Science and technology have already been used to engineer the termination of entire populations of Down Syndrome individuals. Entire countries including Denmark and Iceland and yes, the United States, have a deficit of the number of Down Syndrome individuals they are naturally supposed to have. And it’s not because there is a cure. It’s because children with Down Syndrome are being terminated. European countries and the US are using ultrasounds, prenatal testing, and “heavy-handed genetic counseling” to cull human beings before they are even born.

In an article titled The Real Down Syndrome Problem: Accepting Genocide, George F. Will wrote,

In 2016, a French court ruled that it would be “inappropriate” for French television to run a 2½-minute video (“Dear Future Mom”) released for World Down Syndrome Day, which seeks to assure women carrying Down syndrome babies that their babies can lead happy lives, a conclusion resoundingly confirmed in a 2011 study “Self-perceptions from people with Down syndrome.” (source)

This scenario, implementing genocide and eugenics, is not particularly new. We have, as a society, just found a new technology to implement these morally questionable methods. Of the other societies who have gone the route of limiting children to the “desired” child, there have been no winners, only losers.

Take yet another example – China with their one-child policy. As explained in GlobalDev, male children were the preferred gender so Chinese women would abort or abandon many female children and keep only males. As a result, there’s an entire generation with too many male children. This has caused a whole host of unanticipated problems including increased crime, increased violence, and low birthrate.

One can only imagine the utter chaos that would result from a generation of “edited” and “custom” children. History should have taught us caution and restraint, but it seems the allure of “we can” may have overcome the question, “but should we?”

Jenny Jayne is the mother of two wonderful boys on the Autism spectrum and is passionate about Autism Advocacy. She is a novelist who writes Post-apocalyptic fiction and a freelance writer. Her first novel is coming soon to Kindle eBooks near you. Her guilty pleasures are preparing for hurricanes, drinking hot coffee, eating milk chocolate, reading romances, and watching The Office for the 50th time. Her website: https://jennyjayneauthor.wordpress.com/