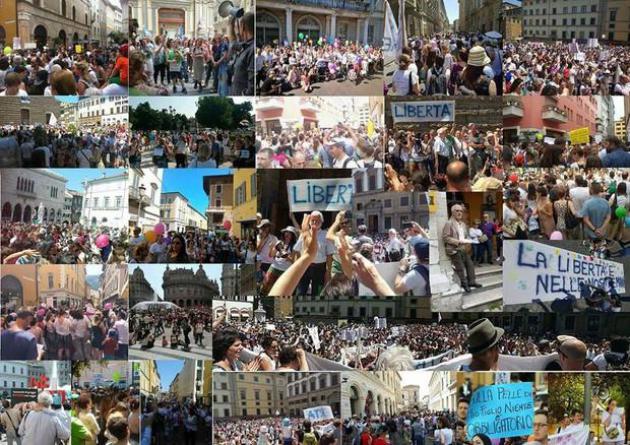 Protests in various cities throughout Italy during the past week (June 2017).

Readers from Italy have been contacting Health Impact News this past week, asking us to cover the massive demonstrations happening throughout Italy to protest a new mandatory vaccine law. This news has been censored from the U.S. corporate media.

Francesca Alesse, who worked with the VAXXED film team to get the film shown in Italy last year, writes

In an unprecedented way, the decree-law proposed by the Minister of Health has been signed by the sitting Italian president Sergio Mattarella. Only four vaccines were mandatory in Italy, now that number triples to 12.

No other decree-law has moved so fast in the Italian legislative system, the reasons of such hurry are incomprehensible considering that the Istituto Superiore Di Sanità (the local version of the CDC) has declared that contrary to what stated in the decree itself there is no objective urgency. There are no epidemics, the number of cases of measles or meningitis in the current year have been substantially lower than the previous year.

Thousands of parents have protested the new law this past June 3rd, protests and marches have taken place in 21 Italian cities spread across the nation. A national protest is scheduled for this Sunday June 11th.

The translated full text of the decree-law is found here.

The new law apparently has severe consequences for parents who fail to comply, including the possibility of having their children taken away from them. In addition to public outcry, there appears to be strong political opposition to the law as well.

Protests are going to increase here, as our Government has announced… a law to introduce 12 mandatory vaccines. The law…. was announced by our Health Ministry to be as follows: 12 mandatory vaccination needed to have access to pre-school system (age 0-6): no vaccination, no enrollment, no exceptions; for mandatory school (age 0-16) if kids were not vaccinated parents should pay a penalty between 500€ and 7.500€ per year, if you cannot afford it, you’ll be refer to Jouvanile Court, that could suspend your parents rights to get your children vaccinated. A national protest is envisaged in Rome on June 11.

This will start within the next school year (September 2017); it has been calculated that more then 800,000 kids will need to receive a massive vaccination in a very little time.

As you know, Italy had been chosen in 2014 as leading Country for the WHO world vaccination campaign co-financed by Bill & Melinda Gates Foundation, therefore what happen here can affect also other countries.

In other comments posted on Facebook, Elisabetta Bressan suggests that the new mandatory vaccine law has strong financial connections to the pharmaceutical company GlaxoSmithKline, which could benefit from over 1 billion euros invested in Italy over the next four years. She writes:

This is the press conference of Health Minister, Ms. Lorenzin explaining the DL https://www.facebook.com/mauriziolupi.it/videos/10155541295653694/

At the opening of the conference, all guests are presented to the press, including Dr. Ranieri Guerra, presented as Director General of Health Prevention of the Ministry of Health. (Man sitting on Ms. Lorenzin right)

His curriculum vitae is regularly published in the Government’s website:
http://www.salute.gov.it/…/CV…/CV_pubblicazioni_Guerra_n.pdf at page 6 you can see he is a member of Glaxo Smith-Kline Foundation board.

On the Foundation website http://www.fsk.it/la-fondazione/storia-della-fondazione/ you are provided with additional information:

In 1987, it was recognized by the World Health Organization (WHO) as the ‘Center for Collaboration in the Training of Health Personnel’ and in 1997 as a ‘Hospitality Management Collaboration Center’ in Italy.

The Fsk.it website belongs To Smith Kline Foundation which is maintained thanks to the non-binding annual liberal loan of the founding partner GLAXOSMITHKLINE SpA, as well as the incomes of its own projects.

The members of the Board of Directors (including Mr. Ranieri Guerra) are appointed, among others, by:
– Ministry of Health, represented in the press conference by Minister Beatrice Lorenzin
– ISS,
– Higher Institute of Health, present in the person of Dr. Walter Ricciardi,
– the same GlaxoSmithKline S.p.A. Vaccines and drugs, Glaxo bets 1 billion on Italy
http://www.sanita24.ilsole24ore.com/…/vaccini-e-farmaci-gla…

Here we talk about an investment of 1 billion euros in Italy for the next 4 years, including 2016 and the years relating to the new National Vaccine Plan 2017/2019 so promoted by the Ministry of Health.

Health Impact News will continue to publish opposition to forced vaccination laws around the world, since the corporate sponsored “mainstream” media in the U.S. is censoring this information.