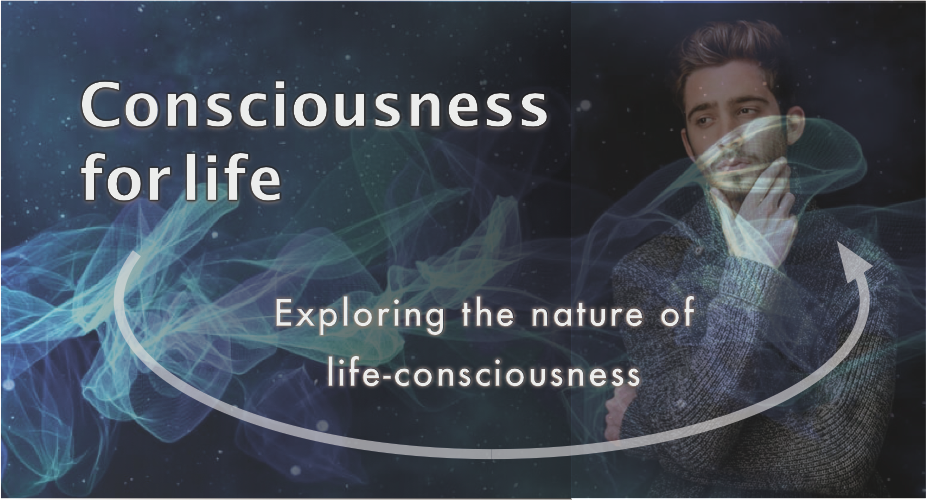 Exploring the real nature of consciousness

Life-consciousness is a new term I have coined to explain consciousness in a manner that science cannot, but let’s start at the beginning. Common sense says horses, rabbits, lions, mice and humans have experiences, sensations and feelings, but chairs, rocks, mud puddles and molecules do not. Question, do all things exhibit consciousness or only things that live?

What follows is a seriously deep, thought generating study for enquiring minds.
Those seeking a quick fix are advised to stop reading.

The underlying question is; ‘what exactly is consciousness?’ Academia has no answer. It is said that any self-respecting psychologist will tell you we have no idea what consciousness really is.

In fact, we should not be surprised that our standard scientific method struggles to deal with consciousness…. Galileo wanted a purely quantitative science of the physical world, and he therefore proposed that these qualities were not really in the physical world but in consciousness, which he stipulated was outside of the domain of science. This worldview forms the backdrop of science to this day. And so long as we work within it, the best we can do is to establish correlations between the quantitative brain processes we can see and the qualitative experiences that we can’t, with no way of explaining why they go together. —Philip Goff, Assistant Professor of Philosophy, Durham University [Emphasis mine]

Many theories abound including materialism, dualism and panpsychism. Sadly, none of these offer a definitive conclusion, essentially because consciousness is considered ubiquitously ‘subjective,’ and so it cannot be definitively pinned down. This failure culminates in what is perhaps best known today as the ‘hard problem of consciousness,’ which argues there is no answer to the question of what causes consciousness.

Suppose however, no such ‘hard problem’ exists. What if consciousness was fully within the domain of science. Suppose we reverted to common sense wherein only living things have consciousness, this being a life sustaining ‘process’ without which life is not possible. That is what this treatise explores.

The nature of ‘the problem’

While ‘materialism’ and ‘dualism’ dominate traditional scientific perspectives to supposedly provide a framework solution to ‘the problem,’ neither is conclusive.

Having twice failed to relate consciousness to physical matter, why would academia not abandon these notions and look at consciousness being related to ‘life?” But no, that notion is considered purely subjective and therefore non-scientific.

Panpsychism is increasingly taken seriously by credible philosophers, neuroscientists, and physicists and it’s not difficult to understand why. Look closely and the ‘materialist’ viewpoint problem is negated, plus the ‘dualist’ problem disappears.

Is panpsychism the answer?

Panpsychism gives consciousness a curious status. It places it at the very heart of every physical entity yet threatens to render it explanatorily idle. Panpsychism offers no distinctive predictions or explanations. It finds a place for consciousness in the physical world, but that place is a sort of limbo. Consciousness is indeed a hard nut to crack, but I think we should exhaust the other options before we take a metaphysical sledgehammer to it. — Keith Frankish

Speaking of sledgehammers, how long will it take for science to inherently recognise that we cannot live without consciousness. Given life and death are both scientifically provable, consciousness must be fully life-related, not matter related, hence my term, ‘life-consciousness.’

The problem of consciousness, however, is radically unlike any other scientific problem. One reason is that consciousness is unobservable. You can’t look inside someone’s head and see their feelings and experiences. If we were just going off what we can observe from a third-person perspective, we would have no grounds for postulating consciousness at all.

So how can science ever explain it (consciousness)? We can establish, for example, that the invisible feeling of hunger is correlated with visible activity in the brain’s hypothalamus. But the accumulation of such correlations does not amount to a theory of consciousness. What we ultimately want is to explain why conscious experiences are correlated with brain activity. Why is it that such activity in the hypothalamus comes along with a feeling of hunger? —Phillip Goff

‘What we ultimately want is to explain why conscious experiences are correlated with brain activity.’

Does brain activity concern ‘life,’ first and foremost? Given that life is of paramount importance, surely consciousness relates to life! What if consciousness is indeed life itself? Would that flip our thinking? What if physical matter is only a tool for living? Think what that might mean.

Relationship between existence and life-consciousness

An axiomatic concept is the identification of a primary fact of reality, which cannot be analyzed, i.e., reduced to other facts or broken into component parts. It is implicit in all facts and in all knowledge. It is the fundamentally given and directly perceived or experienced, which requires no proof or explanation, but on which all proofs and explanations rest. —Ayn Rand

Rand is also credited with the statement, ‘Existence is Identity, Consciousness is Identification.’ Further, ‘it is only in relation to the external world that the various actions of a consciousness can be experienced, grasped, defined or communicated.’ Let’s explore these ideas.

Study of our five senses informs that a complex neurological process is required for us to experience a sensation and to integrate sensations into percepts. That entire process is automatic and non-volitional. it is performed by our subconscious faculty, after which we are made consciously aware of the results, but not of the inherent process. Thus our cognitive mind is prompted to consider, learn and understand what we perceive, and (maybe) act on it.

Surely this means that consciousness is an active (mental) process reliant on some existent thing, idea or theory, of which we are cognitively aware. With no further explanation, conscious enquiry becomes necessary. If this sequential process consciousness continues, how does ‘identification’ continue?

It continues every time our conscious mind discovers and identifies particular constituent properties and relationships, meaning and purpose relating to what we perceive. Later again, subconscious minds identifies the progress of our actions in value terms and alerts us via feelings. Thus ‘consciousness’ really is a process of ‘identification’ in all cases and for both minds.

Why do we have a subconscious mind and what purpose does it serve? First questions first, why do we have a heart, lungs and liver? Isn’t the answer self evident? They give us life and sustain it. Just as our biological systems uphold our life, so subconscious mind exists to uphold our life and cause it to function. Why else would it exist? Life is the supreme value; without which we are dead.

It follows that panpsychism has no need to integrate consciousness into our scientific worldview. It’s there already! Consciousness is equally as scientific as our heart and lungs, provided it is fully understood in (objective) life sustaining terms — as life-consciousness. So what about the subjectivity of free will choices?

Free will appears to deny scientific scrutiny, simply because it permits our being influenced by personal feelings, tastes, or opinions, i.e., subjectivity. Think about that. If our free will choices are to be preserved during the subconscious process, then subconscious mind must be prevented from interfering. Free will makes a (fixed process) subconscious mind necessary, exactly as our bodies must digest what we eat, drink and inhale, whether nutrition or poisonous.

Unless subconscious mind is constrained to always honour our choices for better or worse, free will is a myth. Our (whole) ‘life-conscious process’ must be objectively governed, despite we may feed it subjective (or toxic) content. Can we conclude the full process of consciousness is objectively governed to sustain life, just as our biology is upheld by our immune system, all the while (free will) content is not so constrained? Yes indeed. Our biology and psychology exhibit parallel processes.

So let’s explore what life-consciousness means.

Plant life is ‘conditional.’ When plants cannot obtain soil nutrients, water and sunlight, they wither and die according to their express biological nature.

Animal life is ‘perceptual.’ Their perceptions trigger automatic responsive actions. They hunt, hide, rest, sleep, fight or mate according to what they perceive. Their automated actions are (objectively) goal directed by their perceptual nature in preservation of their life.

Human life is ‘volitional,’ and this is our distinction from all other life forms. Our perceptions do not cause automatic responsive actions. Our perceptions trigger free will to respond, which we may choose or refuse. So cognitive mind takes over from our subconscious and we are in full (volitional) command of our life.

Thus we ordinarily enquire, investigate and learn, eventually choosing and committing to an action of some kind. At this point, subconscious mind resumes. It jump-starts the autonomic nervous system to motor-activate our cells and muscles according to previously learned behaviours. It monitors our progress, identifies and makes corrections so as to complete the desired task. It identifies the outcome and makes us cognitively aware via perception, plus it identifies success or failure and (sentiently) advises via ‘feelings.’

For each choice, action and completion, consciousness loops back to where it began, save we now have an updated experiential database from which to work. This shows that free will is sequentially sandwiched between two different functionalities of the subconscious mind, which means quantitative brain processes and qualitative experiences are irrevocably united. The link academia cold not find is now found. Materialism, dualism and panpsychism fade from view with this understanding o value-transfer. Once understood that emotions are nature’s gift of an (objective) automated mentoring system, the ‘hard problem of consciousness’ vanishes, fully explained as life-supportive data transfer.

Life-consciousness is fully objective in process, despite it must process subjective content on (free will) demand. No dichotomy exists once mental process is distinguished from mental content, just as digestion works according to its rules of nature regardless of ingested content.

That worldwide academia deems consciousness outside the domain of science and finds no way to unite quantitative brain processes with qualitative experiences, is a monumental tragedy. People are denied understanding of nature’s greatest gift.

No more! The good news is that qualitative experiences manifest in emotions arising from (prior) chosen values. We each author our feelings, which nature obliges we objectively back-engineer to identify causative values, so as to retain or revise them — or change our future behaviour. By such identifications (and prompted rectifications), ‘life-consciousness’ answers what science has not yet discovered.

Natural law is universal; immutable natural governance of volitionally conscious beings including behavioural consequences. Absent compliance with these maxims encrypted in the nature and state of Man, the peace and happiness of society can never be preserved.