Microdosing Mushrooms for Anxiety and Depression

Microdosing Mushrooms for Anxiety and Depression:

Microdosing has been known to have multiple beneficial effects on adults, including reducing the effects of Depression and Anxiety. The World Health Organization has unipolar depression ranked as the single largest contributor of illness-induced disability. With the pressures of everyday life weighing down on humans harder than ever, suicide rates are at a drastic amount of 11.5 per 100,000 people in Canada, and 13.5 per 100,000 people in USA. Stats Canadahas estimated that 90% of people who commit suicide have a mental or addictive disorder, including depression and anxiety. With approximately 60% of people who commit suicide having been diagnosed with depression at one point or another, it is the highest-ranking mental illness related to suicide. With such alarming numbers, patients and scientists both have looked towards microdosing psilocybin as a possible treatment for depression and anxiety.

Psychedelic researchers had been conducting extensive investigations on the medical benefits of hallucinogens in the 1950s and 60s; however, these researchers were limited in the 70s when political and cultural pressures forced them to cease their studies. Since the 90s, many researchers began once again looking into the medical benefits of hallucinogens, including psilocybin. One such study done in 2010 set out to explore the safety and efficacy of microdosing psilocybin in patients with advanced-stage cancer and reactive anxiety. The study concluded that there were no adverse effects with psilocybin. Furthermore, patients demonstrated a significant reduction in anxiety at 1 and 3 months after microdosing and a drastic improvement of mood within 6 months.

Microdosing Psilocybin is able to help those with depression and anxiety by targeting the serotonergic 5-HT2A receptors, which in turn promotes the production of Brain Derived Neurotrophic Factor (BDNF) and increases the transmission of Glutamate. Brain Derived Neurotrophic Factor (BDNF) is a neurotrophin which is vital to the maintenance, survival, and growth of neurons in key brain circuits which are involved in emotional and cognitive function. Those with anxiety or major depression disorder are known to have reductions in BDNF which is why microdosing psilocybin has been used to treat those with depression as it increases the production of BDNF.

Microdosing psilocybin causes parts of the brain which would normally not communicate together, to communicate with one another. These brain connections are made by decreasing the activity in our Default Mode Network (DMN), which is often a very over-used part of our brain. The DMN in our brains is responsible for numerous mental activities such as thinking about the past/future and self-reflection. With an over-stimulated DMN, these mental thoughts often lead to thoughts of depression and anxiety. Since microdosing has been proven to slow down the activity of our DMN, it leads to humans naturally thinking in new ways which would otherwise be inaccessible to us. These new thought patterns help remove and forget about depressive and anxious thoughts altogether and allow people to be present in the current moment.

Scientists and medical researchers have been conducting tests and experiments for years to pinpoint all of the medical benefits of microdosing psilocybin. Studies are still coming out at a high rate which outline new potential medical benefits of microdosing psilocybin. Although microdosing to treat depression and anxiety has caught mainstream appeal as of late, it may not work for everyone as all humans are individually wired and microdosing may have adverse effects for those with other pre-existing medical issues. We recommend speaking to your doctor or other health care professional prior to trying any of our microdosing supplements. 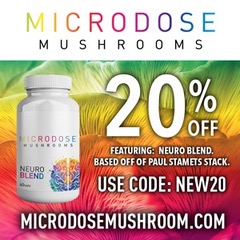