Mind Control is NOT A Conspiracy Theory 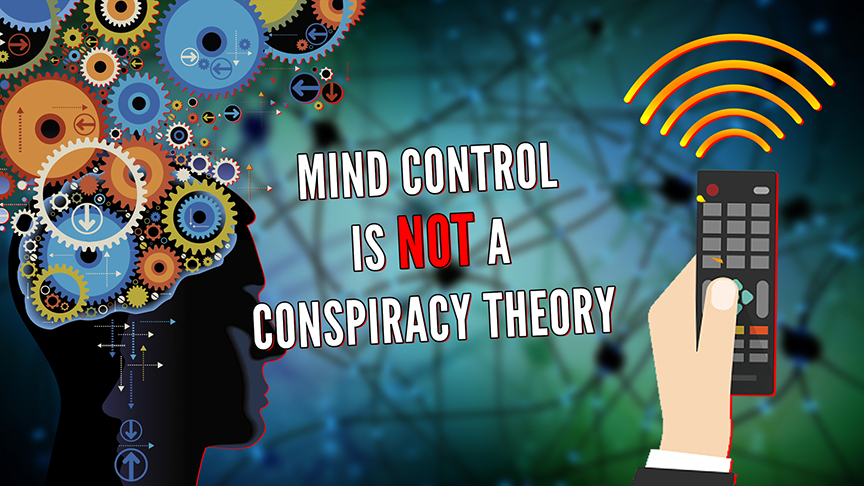 Mind Control is NOT A Conspiracy Theory

by James Corbett
corbettreport.com
May 8, 2021

Conspiracy theorists in tinfoil hats trying to keep the aliens from beaming messages into their heads? Evil scientists using spinning pinwheels and special potions to brainwash their hapless victims into doing their bidding? Sci-fi stories about remote-controlled people?

Yes, the idea of mind control has effectively been usurped by the social engineers so it is largely seen as the stuff of fantasy. Whether that fantasy takes the form of a fun, silly, science fiction story or it becomes the deranged rantings of a marginalized conspiracy loony makes little difference; as long as the general population understands it’s a “kooky” subject, most people will instinctively know to avoid it.

But guess what? Mind control is not the stuff of fantasy. It is a mundane reality that is increasingly finding its way into science journals, declassified documents and even the daily newspaper.

“What’s in your head? Just like in Nolan’s ‘Inception’, brain tech can hack your mind; ‘neuro-rights’ can keep you safe.”

That rather breathless headline comes not from some independent media outlet, but the Agence France-Presse (via The Economic Times). It turns out that the AFP would like you to know that it will soon be possible to read your mind. In fact, this future technology will be able to know what you’re goingto be thinking “before even you’re aware of what you’re thinking.”

So why is the dinosaur media bringing this up at all? Like everything else they write, this, too, is a form of limited hangout and an attempt to steer the conversation about this mind control threat in a certain direction. But it does signal one key fact: Having worked for decades to keep the conversation about mind control on the fringes, the social engineers are now looking to bring it into the mainstream. And that should worry us for a host of reasons.

Now, I’m not just talking about “mind control” in the sense of propaganda, psychological manipulation and media programming here. I’ve been covering that for years and yearshere at The Corbett Report, including my extensive work on the MK Ultra program, my #PropagandaWatch series—which spent over two years examining how propagandists manipulate the public mind—and my recent work discussing the ongoing research into how best to manipulate people into taking vaccines.

No, today we’re talking about the real sci-fi comic book kind of mind control, the little devices implanted in people’s brains to take over their bodies. As it happens, that kind of technology isn’t quite as fantastic as the social engineers have led you to believe.

A clue to all of this comes from the AFP article cited above. In that piece, specific developments in the area of neuro-technology are discussed, including devices that will allow assorted bad actors to “write emotions into your brain” and implant “life stories that aren’t yours” into your memory. The newswire then goes on to cite Rafael Yuste—an “expert on the subject” at Columbia University—who notes that this technology is not merely theoretical, but actually being used in the lab: “Scientists have experimented with rats, implanting images of unfamiliar objects in their brains and observing how they accept those objects in real life as their own and incorporate them into their natural behavior.”

Predictably enough for an article from the dinosaur media, though, even as they admit that this technology is actively being worked on and even legislated against, they simultaneously have to pooh-pooh it as the stuff of “sci-fi movies and novels,” which “have offered audiences the dark side of neurotechnology.” They then go on to discuss the “significantly positive applications” this technology can have, noting how “In 2013, then-US president Barack Obama promoted the BRAIN (Brain Research through Advancing Innovative Neuro-technologies) initiative, which aimed to study the causes of brain disorders such as Alzheimer’s, Parkinson’s and epilepsy.”

This will not be surprising at all to those who remember my previous reporting on the coming brain chip, where I discussed the DARPA-led “BRAIN Initiative” and pointed out exactly how this creepy mind control technology was going to be sold to the public; namely, by highlighting the potential benefits of such devices for quadriplegics and other disabled individuals.

And now here we are, with the AFP telling us about the potential “positive applications” of this technology—including “patients suffering from Parkinson’s,” “deaf people” and “those with Alzheimer’s”—even as they are reporting on the Chilean president’s proposal at last week’s Ibero-American summit in Andorra to legislate against the potential abuse of this technology by those with ill intent:

“I call on all Ibero-American countries to anticipate the future and to adequately protect, now, not just our citizens’ data and information, but also their thoughts, their feelings, their neuronal information, to prevent these from being manipulated by new technologies,” the conservative Pinera said.

The Chilean bill contains four main fields of legislation: guarding the human mind’s data, or neuro-data; fixing limits to the neuro-technology of reading and especially writing in brains; setting an equitable distribution and access to these technologies; and putting limits on neuro-algorithms.

Of course, like every such proposal for government regulators to come in and “solve” a problem like this, the “solution” turns out to be as bad as (if not worse than) the problem it is attempting to remedy. Rather than prohibiting such technology, such regulation would in fact encourage its use, with the government simply deciding which uses of the technology will be allowed or disallowed. As the AFP frames it (once again using Rafael Yuste as the mouthpiece for this agenda), the idea of mind control and neurological manipulation isn’t inherently bad; it’s only bad because those with the brain chip will be so much more advanced than their non-upgraded brothers and sisters. Thus, just like how minorities, the poor and other historical targets of the eugenicists were prioritized in the COVID vaccine roll-out in the name of “social justice,” so, too, will governments have to make sure that everyone has access to the brain chip.

“To avoid a two-speed situation with some enhanced humans and others who aren’t, we believe these neuro-technologies need to be regulated along principles of universal justice, recognizing the spirit of the Universal Declaration of Human Rights,” said Yuste.

Ah, yes, the Universal Declaration of Human Rights, that noble UN document drafted by known eugenicist H. G. Wells, which professes to enshrine all of the freedoms and rights that we hold so dear . . . except  when they are “exercised contrary to the purposes and principles of the United Nations.” Bill Gates must be drooling with glee at the prospect of uploading his operating system directly into people’s brains and Elon “Neuralink” Musk must be wetting his pants in the anticipation of becoming the world’s first (publicly acknowledged) trillionaire.

From neural dust and neural lace to mind-reading devices and brainchips, the next wave of devices for controlling the public at the neurological level is already being developed. What’s more, the propaganda campaign to sell this high-tech horror to the public is already being rolled out. In fact, within the next five years we are going to see the introduction of increasingly invasive “hearable” and “wearable” technology as a way of preparing the public to accept the brain chip.

But don’t take my kooky, crazy, conspiracy theorist word for it. Here’s the comic book arch-villain of our insane clown world, Herr Schwab himself, telling a French interviewer back in 2016 that we are all going to be implanted with brainchips by the year 2026:

He even explains how the brain chips will be introduced incrementally, so as to get the public used to the idea of having their constant electronic (mind control) companion. First the devices will be implanted in our clothes and then through some microchip implanted in our brain or under our skin, “and, in the end, perhaps there will be a direct communication between our brain and the digital world” leading to “a kind of fusion of the physical, digital and biological world.”

The funny thing is that before you show your normie friend that clip they’ll call you a barking mad conspiracy loony and dismiss the very idea of brain chips, but after you show them that clip they’ll give you fifteen different reasons why brain chips are an obvious and laudable evolution in technology. They will then assure you that there’s nothing at all untoward about the concept of WEF-approved tech being implanted directly in your cerebral cortex and that it’s perfectly reasonable for Klaus Schwab to be talking about turning the human species into an army of brain-chipped cyborgs. Finally, they will solemnly affirm that they will be the first in line to take the transhuman upgrades as soon as they’re commercially available and that you must be an insane wing-nut if you wouldn’t jump at the opportunity to be chipped by Klaus and his cronies.

Now if that’s not mind control, I don’t know what is.

The video embedded in this article after “Here’s the comic book arch-villain of our insane clown world, Herr Schwab himself, telling a French interviewer back in 2016 that we are all going to be implanted with brainchips by the year 2026” won’t post on Minds.com so here’s the link: https://www.bitchute.com/video/vgrejS6QmPXg/