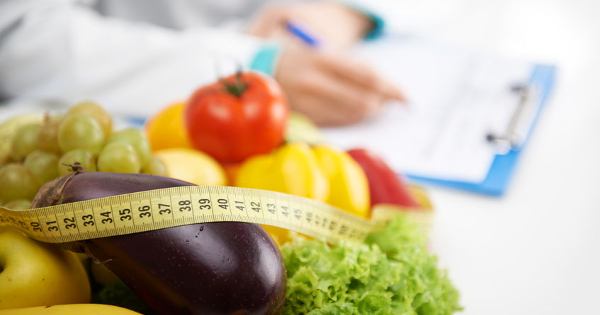 2018 As a Milestone in the Post-Truth Era

Among the various topics that have either interested or fascinated me throughout my youth and well into my adult years, Nutrition has certainly reigned supreme. My personal routine has been to read as much as reasonably and practically possible on the topic, while not doing so to the exclusion of other topics in biomedicine, psychosociology and philosophy. Thus, with roughly 30 years of experience in reading books and primary research in the field of Nutrition, I could not help but notice the radical departures that occurred in 2018 from the previous norms to which I had grown accustomed.

Of course, 2018 was not the first year during which “bad research” was published in mainstream medical journals and then replicated throughout the echo chamber of mass media; one could observe this periodically occurring throughout the past 50 years, starting not at least with the demonization of dietary cholesterol and the glorification of processed foods, especially refined grains and so-called vegetable oils. But in 2018 what many of us observed was not simply poorly performed research but, in some instances, radical departures from any attempt to present data and descriptions that could be considered “reasonable” by any previous standard.1 Especially related to the topic of Nutrition, mainstream medical journals and the mass media which parrots their conclusions have begun to distribute overt misrepresentations of Nutrition with reckless disregard for science, logic, biomedical history and ethics.

One has to be aware of a few key ironies that characterize mainstream medical discussions of nutrition–namely that 1) medical physicians receive essentially zero training in clinical nutrition in their graduate school education nor in their post-graduate residency training2, 2) medical physicians and organizations publish “research” and related commentaries (both of which commonly conclude that nutritional interventions are inefficacious or unsafe), despite their lack of formal education on the topic, and then 3) mainstream medical voices consistently call for “regulating the nutrition supplement industry” despite their lack of training on the topic and because of negative conclusions based on their own poorly conducted research and self-serving conclusions. As such, not only are the map-makers blind, but they mislead their blind followers, and then both groups promote themselves as expert cartographers and guides when advising the public on an area that none of them have studied or understood. We should have no surprise whatsoever when the “medical community” publishes poorly conducted and self-serving “research” on the topic of nutrition, to reach their desired conclusion that nutrition is unsafe and inefficacious, and that the profitable market needs to be managed of course by the selfsame “medical community” that is never received a decent 15 minutes on the topic of therapeutic nutrition. Pervasive and persistent ignorance on the topic of nutrition among medical physicians must be understood as intentional and strategic because otherwise this problem would have been solved 30 years ago when it was first discussed during what was called at the time the “golden age of nutrition.3 The easiest way to manipulate people and to keep them in a perpetual state of confusion, ineffectiveness, and dependency is to keep them ignorant on important topics; our educational system consistently achieves this goal with spectacular brilliance and efficiency.4 To be sure, most societies throughout history have maintained inculcated inconsistencies; but the paradox that we currently witness is that in this so-called “age of information”, the use of lies (“post-truth era”5) and the manipulation of science and public opinion (“manufacture of consent”6) appears to be getting worse, not better.

Add to this the shortened attention spans of today’s students raised in fractured families amid a culture of distraction, their growing disregard for hard work, their incendiary lack of respect for experienced teachers, and the fact that many “accredited universities” function as diploma mills by allowing students to sleep and cheat their way through graduate programs, and one can experience a nihilistic chill when pondering the probable future of intellectual integrity and the products of education.

Transitioning from ‘Post-Truth’ to Overt Censorship

As if erroneous and fraudulent information were not bad enough, now in early 2019, we are witnessing a transition from propaganda to censorship, insofar as information unfavorable to the pharmaceutical paradigm is being blocked from bookstores and social media at the request of American politicians, presumably at the behest of their pharmaceutical funders.7 Various social media platforms, film distributors and bookstores have moved to ban discussion of iatrogenic adverse effects following the administration of various pharmaceutical drugs, thereby depriving millions of people access to information independent from direct pharmaceutical influence. In the history of the United States, the First Amendment to the United States Constitution was intended to protect free speech and free press – that is the distribution and publication of ideas; unfortunately, the American founding fathers never had any idea that the media and means of distribution of information would become so privatized and centralized that it could be controlled – not through direct government action as the First Amendment addresses – but through political pressure on those means of distribution; i.e., the government does not have to ban anything as it only has to put political and social pressure on those who distribute information such as bookstores to create an effective ban even though the ban is not coming directly from the government. If independent opinions and compelling case reports cannot be openly discussed with regard to medical iatrogenesis, especially in cases where no organized and effective system of postmarketing surveillance exists, then what I call the “pharma-media echo chamber”8 will be the only source of information, albeit highly biased in favor of drug sales. 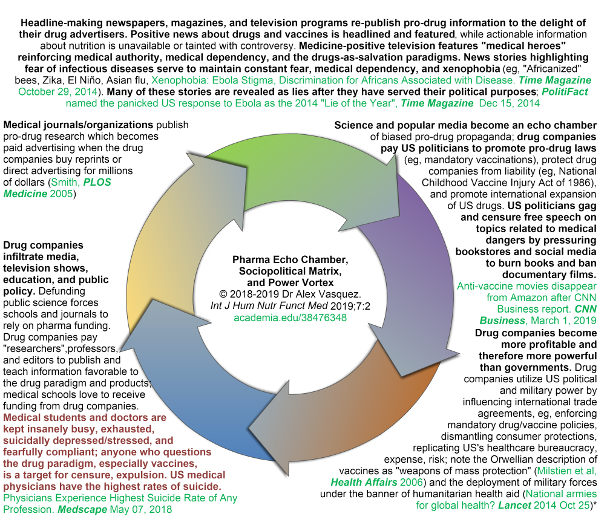 For decades, the general public has been misinformed about diet, and this misinformation has come directly from mainstream medical journals and major universities (especially those that are considered “elite”) and has been endorsed from top to bottom throughout the medical spectrum all the way to the highest levels of government. The most obvious example is that of endorsing high carbohydrate diets while witch-hunting dietary sources of fat; this advice did much to promote the carbohydrate-induced/exacerbated epidemics of obesity, insulin resistance, type-II diabetes, hypertension, dyslipidemia and cardiovascular disease as well as exacerbation of many other inflammation-related diseases including psoriasis, asthma, and multiple sclerosis. For decades, alternative views contradicting this mainstream dogma were labeled as “dietary quackery.” Ironically, the only way to eat a healthy diet has been to ignore the officially endorsed recommendations from governments and medical societies.9

The medical misinformation machine is not going to stop itself because it has no will to stop and also because it is fully self-perpetuating and virtually without internal friction. The medical machine controls the means of communication via mainstream headlining medical journals, medical news and information websites, as well as the mass media of television, magazines, and newspapers. Notably in the United States, the medical machine pays politicians millions of dollars each year to ensure that its voice and interests receive preferential treatment in the form of squashing alternative views and legislating mandatory drug enforcement policies; these political problems are further compounded by the fact that the fossil fuel industry blocks initiatives promoting public mass transportation, which would otherwise have a health-promoting effect by encouraging walking and bicycling and promoting development of antiobesogenic neighborhoods with their attendant safety, convenience, beauty, and public forum.10 Whereas independently published materials – scientifically valid though they may be – might reach a few hundred or a few thousand people, by comparison, the mainstream medical media can reach an assured audience of several million people despite any scientific substantiation or logical basis in their message. The same drug companies that fund and influence research structure and reporting also fund and influence the major media outlets, which reciprocate the publication of pro-pharmaceutical news in exchange for advertising dollars. As the mainstream echo chamber perpetuates itself, repeated messages and soundwaves transform from a reverberating echo into a power vortex which suctions money from the population while feeding itself in a manner similar to a wildfire that becomes a tornado (i.e., fire whirl, firenado, pyro-tornadogenesis11), likewise thereby intensifying the groundfire below (e.g., drug sales fund infomercial research to fund more drug sales) and the air-moving fire-feeding vacuum torrent above, which becomes a political power vortex as dollars pyroclastically convert into political protections and drug-mandating laws, thereby showering the underbrush with more incendiary financial influence. Reforming the political system by eliminating gerrymandering and reducing the financial and political influence of pharmaceutical and other private corporate interests is necessary to break the influence held by industry over the government. Increasing scientific literacy – including that of Nutrition – among the population and especially within the so-called “medical community” is also essential to break the echo chamber of misinformation. However, both of those recommendations – political reform and educational improvement – will require decades before taking effect, if they ever occur. Meanwhile, the one thing that we can do immediately to have a beneficial effect in the here-and-now is share accurate information related to health and nutrition – and to do so via media that are not controlled by pharmaceutical interests – and this is exactly our goal at the Journal of Orthomolecular Medicine and International Society for Orthomolecular Medicine. As I stated in my previous editorial12, “The future belongs to those who write it”, and this is exactly why we encourage you to support and write for our Journal.

Alex Vasquez DC ND DO FACN is the author of many books (including Functional Medicine Rheumatology, AntiViral Strategies and Immune Nutrition, and the recent 700-page textbook “Functional Inflammology: Volume 1”) and more than 100 publications in professional magazines and peer-reviewed medical journals, such as British Medical Journal (BMJ), Journal of Clinical Endocrinology and Metabolism, Journal of the American Medical Association (JAMA), Alternative Therapies in Health and Medicine, and Arthritis & Rheumatism, the Official Journal of the American College of Rheumatology.