Modern Serfdom: The Planned Economic Devastation of the ‘Great Reset’ 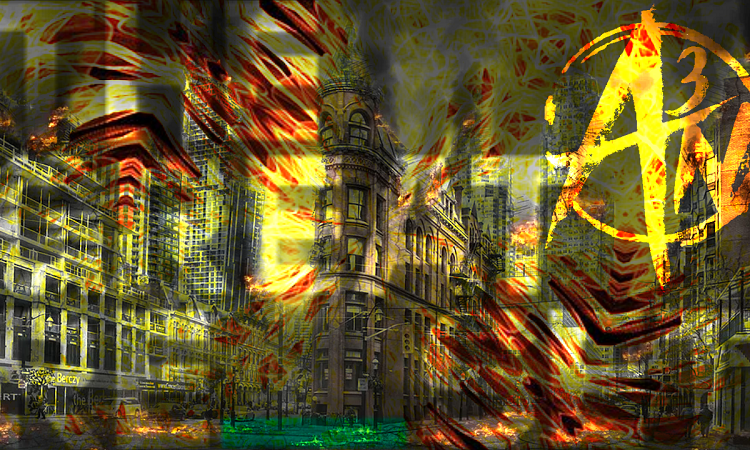 Modern Serfdom: The Planned Economic Devastation of the ‘Great Reset’

For starters, I think the idea that the World Economic Forum’s “Great Reset” is some sort of fringe conspiracy theory — or even conspiracy theory at all — needs to be laid to rest. This is not hard to do, but given the current atmosphere of hysteria, I guess it would be ill-advised to expect too many to care. As such, what follows is a breakdown of the general direction the economic destruction being brought about by this agenda is taking, for those interested in learning more about it.

So the reader knows I am not making this up, she or he can get a brief, cinematic introduction to the Great Reset agenda here, straight from the horse’s mouth. 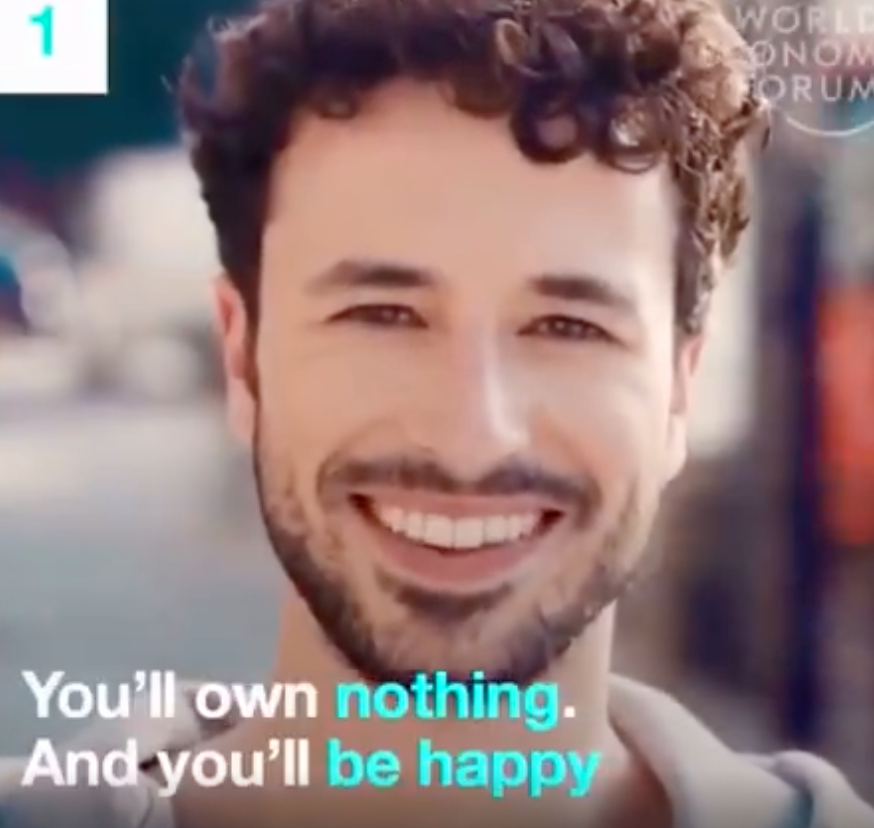 According to the World Economic Forum (WEF), an “international non-governmental and lobbying organisation based in Cologny, canton of Geneva, Switzerland,” as per Wikipedia, the overarching goal of the Great Reset is to make nearly every single problem humans face go away by divesting common individuals of private property.

Of course, WEF doesn’t say it exactly like that… but pretty much: “You’ll own nothing. And you’ll be happy.” The linked video there understandably caused quite an uproar, and has since been deleted by WEF, but luckily for founder and Great Reset mastermind Klaus Schwab, all the policy goals remain intact.

WEF puts forward the idea that it is a non-governmental forum seeking to influence global decision makers for the betterment of humanity. The forum’s website states that it is “independent, impartial and not tied to any special interests.” But Investopedia notesthat “The organization is funded through its own membership, which includes many prominent business and political figures,” elaborating further:

“[WEF] membership is a cross-section of the global elite from the private and public sector and includes some of the most prominent CEOs, diplomats, celebrities, media personalities, government officials, religious leaders, and union representatives from around the world.”

In other words, much of the World Economic Forum’s activities are funded by powerful people who receive paychecks extorted from taxpayers, and have extremely vested interests in serving their own political, corporate, or financial agendas. For WEF to say it is “impartial and not tied to any special interests” is thus pretty absurd.

In WEF’s own words:

“The Forum engages the foremost political, business, cultural and other leaders of society to shape global, regional and industry agendas.”

So where do you, the common, everyday individual fit into the puzzle here that WEF is putting together? You are what they consider a “stakeholder.” In fact, “stakeholder theory” is what guided founder Schwab in creating the group’s mission. This all might sound well and good, until one realizes what a stakeholder is, to WEF’s thinking. It’s a serf. The owners of the hard assets, land, and the castle are the actual group members. 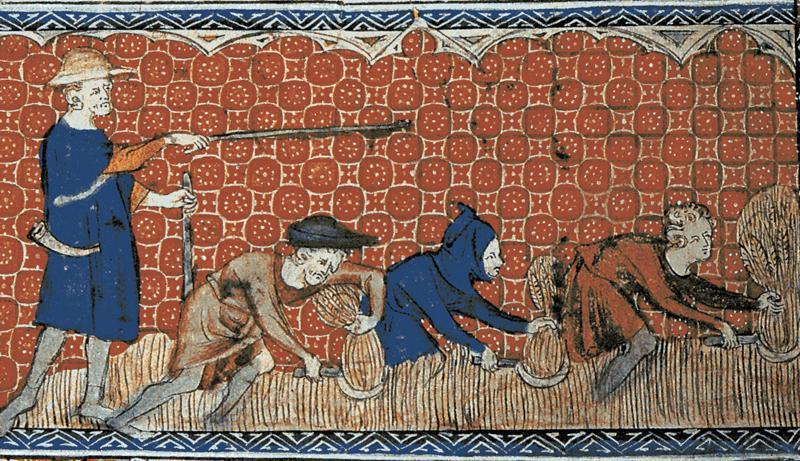 “Our activities are shaped by a unique institutional culture founded on the stakeholder theory, which asserts that an organization is accountable to all parts of society. The institution carefully blends and balances the best of many kinds of organizations, from both the public and private sectors, international organizations and academic institutions,” WEF maintains.

Being accountable to all parts of society sounds nice, until you realize that said accountability translates to an unprecedented, technocratic invasion of our lives and privacy, and forced redistribution of wealth. At that point, I’d rather not hold any sort of “stake” and be completely left alone and forgotten by these people. Again, a stakeholder, more accurately put, is a literal serf or worse: “You’ll own nothing. And You’ll be happy.” As Investopedia puts it:

“The reset calls for massive redistribution of wealth and the reduction of competition, creative destruction, and economic growth in favor of collective goals, government control, and social welfare.”

Before moving on, here is an (for the most part) excellent video breakdown of the WEF’s totalitarian, anti-property (for anyone but the ruling class) agenda, disguised as “greater good” feel-good fluff:

“You will OWN NOTHING, and you will be HAPPY” | Douglas Kruger debunks Great Reset 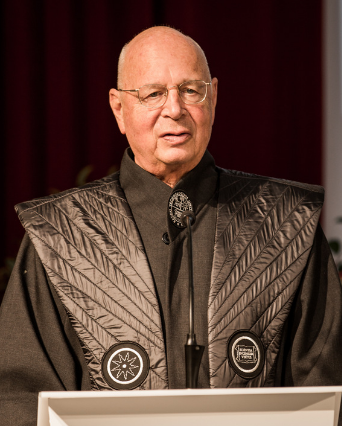 As “vax passes” are now beginning to be rolled out globally, and populations forcibly segregated, the already wounded tourism and service industries of the world (not to mention almost every other industry) are dealt another mortal blow. Inflation and insolvency plague massive economies at unprecedented levels, supply chains are strained, and central bank digital currencies are being developed rapidly to swoop in as savior. As Klaus Schwab and Thierry Malleret’s book Covid 19: The Great Resetlays out:

“…COVID-19 is likely to sound the death knell of neoliberalism, a corpus of ideas and policies that can loosely be defined as favouring competition over solidarity, creative destruction over government intervention and economic growth over social welfare. For a number of years, the neoliberal doctrine has been on the wane, with many commentators, business leaders and policy-makers increasingly denouncing its ‘market fetishism.’”

This so-called “market fetishism” is what was feeding hundreds of millions of impoverished individuals before forced lockdowns violently shut down their places of work and livelihoods in countries like India and myriad others. That dirty phrase “free market competition” and the blasphemous word “productivity” are likely what helped Schwab’s own father — a rumored Nazi collaborator via his work at Escher Wyss & Cie.— place the silver spoon all the more firmly in Klaus’ unsmiling mouth.

If, as Schwab suggests, government intervention and social welfare with redistribution of wealth is the overarching goal, it stands to ask why the WEF doesn’t pay taxes as an organization that shapes global policy, and why Schwab remains so uncommonly wealthy. Shouldn’t he be making himself a member of common society? Why on earth does it cost so much to join in on the World Economic Forum discussions at Davos, which obviously — as a Forbes journalist has noted — will exclude the very people these so-called “elites” profess to be helping?

“The irony is lost on the partygoers, as a steady stream of private planes, helicopters and expensive luxury cars whisk the top 1% into town. Offering little self-awareness, leaders of the WEF claim that the jet-set class promises to purchase carbon credits to offset the emissions from their planes,” Forbes senior contributor Jack Kelly noted in 2020, writing about Davos.

As Ayn Rand reminds us:

“Socialism is the doctrine that man has no right to exist for his own sake, that his life and his work do not belong to him, but belong to society, that the only justification of his existence is his service to society, and that society may dispose of him in any way it pleases for the sake of whatever it deems to be its own tribal, collective good.”

And the kicker here, of course, is that “society” is always just a few individuals — like Schwab and his friends — in power, shaming everyone else about the so-called greater good and chastising them for the “selfishness” of wanting to exercise bodily autonomy and keep what they earn. 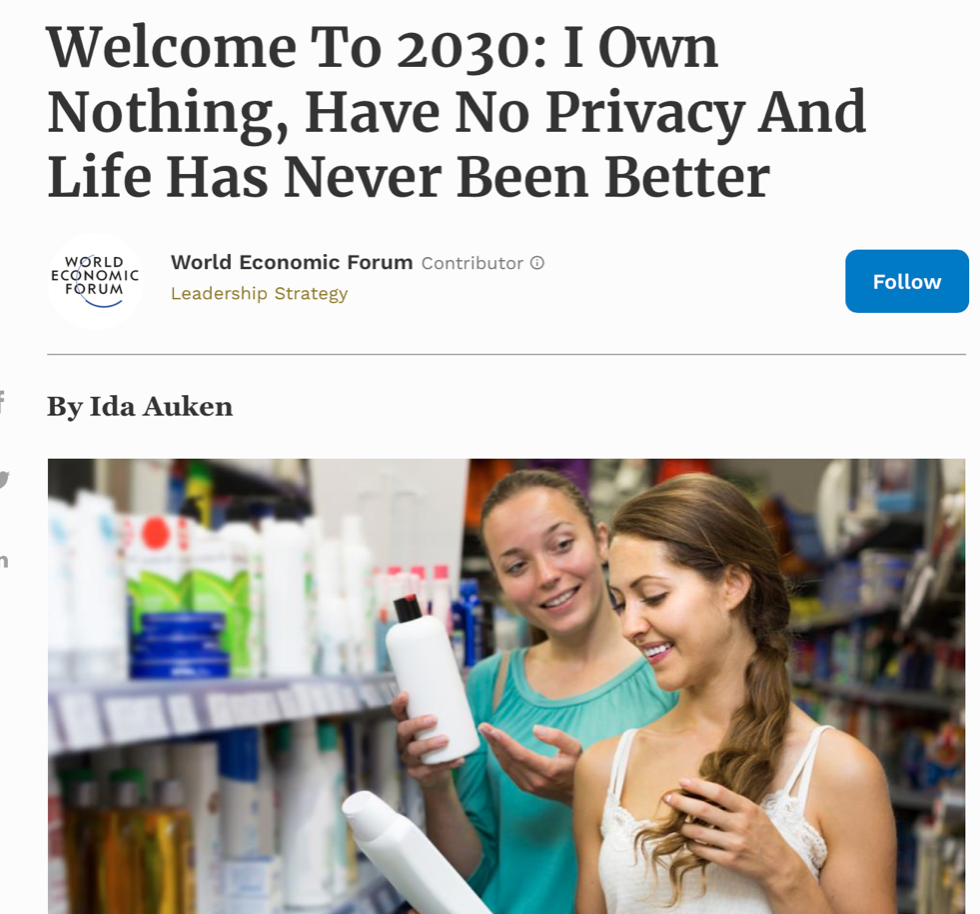 What lies at the doorstep, then, is three general themes:

Schwab and the World Economic Forum are not shy about stating such goals and visions openly. They are looking forward to the “internet of bodies” and a global, technofascist/socialist/communist state, the depth and breadth of which even George Orwell likely could not have imagined:

“We’re entering the era of the “Internet of Bodies”: collecting our physical data via a range of devices that can be implanted, swallowed or worn,” a WEF publication notes. The latest headlines in the news are suggesting that the new coronavirus vaccine passes could be implanted in the skin for greater convenience.

So, if you are wondering why governments are lying about out-of-control inflation, continuing the reckless printing of fiat money and spending, buying up all the real estate via Wall Street, lying about coronavirus statistics, pushing nonsensical policy after nonsensical policy, the answer is quite simply that the overarching goal is to reorganize society into a model where the ruling class wields absolute global power: owning all assets, and making all money programmable, with the ability to be tied into social credit scoring systems. The serfs and slaves are culled by experimental “medical interventions,” and then given very little to subsist on. But hey, at least we’ll have the co-opted, Meta version of the metaverse. But now I’m getting sidetracked.

To bring Klaus Schwab’s dystopian wet dream to pass, current systems must first be collapsed and the collapse blamed on something. Once people are scared and desperate enough, most will accept any loss of freedom, implant, or ridiculous economic “policy” governing their lives as long as they can “stay safe.” The Eugenics aspect of this societal reset is already culling the global population of “useless eaters” and removing dissidents — something Schwab’s progenitors likely knew much about in WWII-era Germany and prior — and the final economic pressure being applied will seal the deal for many without the stomach to resist. Operation Paperclip never went away, and the Fourth (Reich) Industrial Revolution is here.

As former Chief of Staff for Barack Obama, Rahm Emanuel, has stated: “You never want a serious crisis to go to waste. And what I mean by that, it’s an opportunity to do things that you think you could not do before.”

As the sociopaths at the helm of the cult called statism know all too well, even when you don’t have a serious crisis, you can manufacture one. For reference see 9/11, Operation Northwoods, the Gulf of Tonkin incident, etc., etc. In this particular case, look into “Event 201.”

As the slightly-hacky-but-basically-accurate meme floating around correctly predicts: “The final variant is communism.”

In other words, the final variant is a full-on global state tyranny: destruction of property, money, and with these, freedom and any sort of life worth living. For the serfs, that is. Klaus, like all great communist leaders, will certainly be living the high life while everyone else is “happy” with nothing. That is, if this threat is not faced squarely right now and dealt with.

Our mission is to spread agorism and connect the counter-economy.
Agorist Nexus