Our Moment – Our Movement! By Julian Rose 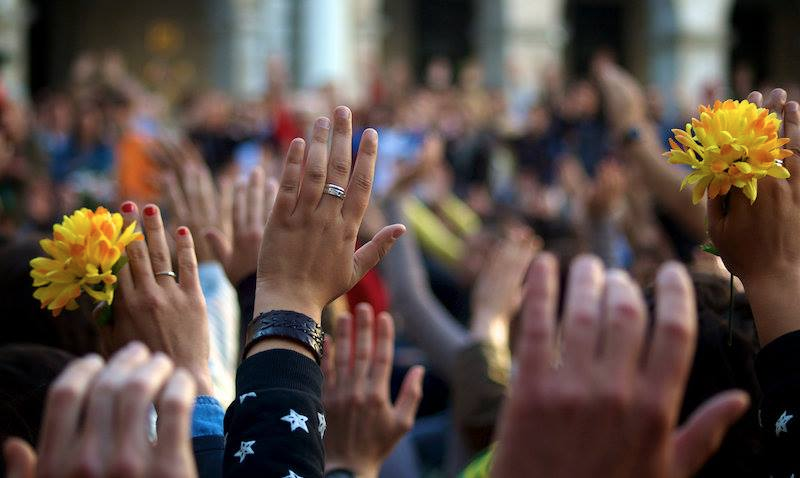 Our Moment – Our Movement!

The heroic actions performed by the Canadian truckers are having powerful reverberations throughout the world. Inspired by the honesty and sheer determination of these brave citizen’s push- back against a mandatory vaccination programme, suddenly a whole new horizon has been illuminated for where this can go.

No longer is the talk solely about stopping the super dictatorial Justin Trudeau’s forced vaccination programme on truck drivers. Now the rapidly swelling call is for a much larger demand to be met: recovering the freedoms, liberty and basic human rights stolen from people right across the length and breadth of the planet.

We must all seize this moment for it is the expression of a unique confluence of events. Events that could tip the balance in favour of a domino effect collapse of all the stolen power that is being used to hold the human race to ransom. That violent anti-human/anti-life centralised control system which is trying to take fascism into its next dimension of pre-meditated murder.

This is a critical moment. The Canadian authorities have clearly decided to try to starve-out the truckers. They will no doubt use every trick in the trade to break their will and that of the supportive protesters. At a moment like this we must all become part of the battle to vanquish our tormentors.

Many of us can feel a tingling in our veins when we hear of ordinary (extraordinary) people of Canada sacrificing their working lives and salaries for the sake of a great cry for freedom and truth. It touches a universal collective unconscious link between all of us.  We cannot leave them to carry the full burden of this giant stand for a liberated humanity; we must all rise-up, put our shoulders to the wheel and shove like never before!

While further supportive trucker, farmer, protester convoys also move into action across Europe, Australia and New Zealand, the prospect of a truly dynamic people’s uprising spanning all counties, races, colours, creeds and social standings is on the cards for the first time in human history.

Such an uprising will demand a level of maturity and determination never before fully achieved. It will bring a multidisciplinary factor into the equation that has the potential to unite doctors, lawyers, scientists, human right proponents, social workers, thoughtful academics, police, military personnel, business leaders, artists, working people in general and, dare I say it, even journalists.

Because all these – and many more – know in their hearts that their professions have been corrupted beyond measure by that tiny global anti-human ‘elite’ whose aim is to capture this planet for their own diabolical ends, and in so doing spread mayhem and grief amongst decent honest people the world over.

As the working people climb to their feet and proceed to throw-off the yoke of intolerable repression, doctors and lawyers are forming unprecedented alliances whose significance is particularly striking and will lead-on to a thorough examination of how these two professions can come back on course (be transformed) to support the true health and welfare of the people; rather than lining their pockets with the wealth of the corporate pharmaceutical behemoths and the soulless tycoons who run the blatantly top-down weighted legal system.

The far-sighted action known as ‘Nuremberg 2’ is another vital initiative that is underway as I write.

Its team of leading lawyers, medical experts, whistle blowers and geopolitical specialists, will ensure that the full horror of ‘Covid crimes against humanity’ are pragmatically exposed and documented; so that those responsible for these acts of mass genocide are fully identified and officially held responsible for their indefensible deeds.

This action, while unacceptable to the official legal matrix, therefore impossible to stage in the classical courts of Europe and North America, will clear the way for the actual trials of those indicted  once ‘we the people’ have fully risen to our task and achieved an unstoppable momentum which will sweep aside the intolerable blocks placed upon our God given freedoms.

Everywhere peoples’ hearts are swelling with a new found sense of pride. A pride inspired by those who are showing what humans can do when faced by the necessity to make a steadfast commitment to ‘hold the line’. Hold the line for freedom, justice, truth and love, at a time when these are right on the brink of being lost forever.

There is nobody who can’t play their part in this extraordinary challenge/opportunity to liberate the planet from the forces of darkness.

Be the first to step out of your dangerously pacifying ‘comfort/safe zone’ so as to defy the fake authorities whose goals count on continued submission to their blind and brutal decrees.

There is a great need for all of us to send energetic positive thought waves to all those at the centre of the storm. There is real power in this form of energy transference and it could just make all the difference. So, if you haven’t already done so – start transmitting today!

We can and we must – without hesitation – step up to the task at hand and keep going until victory is finally secured.