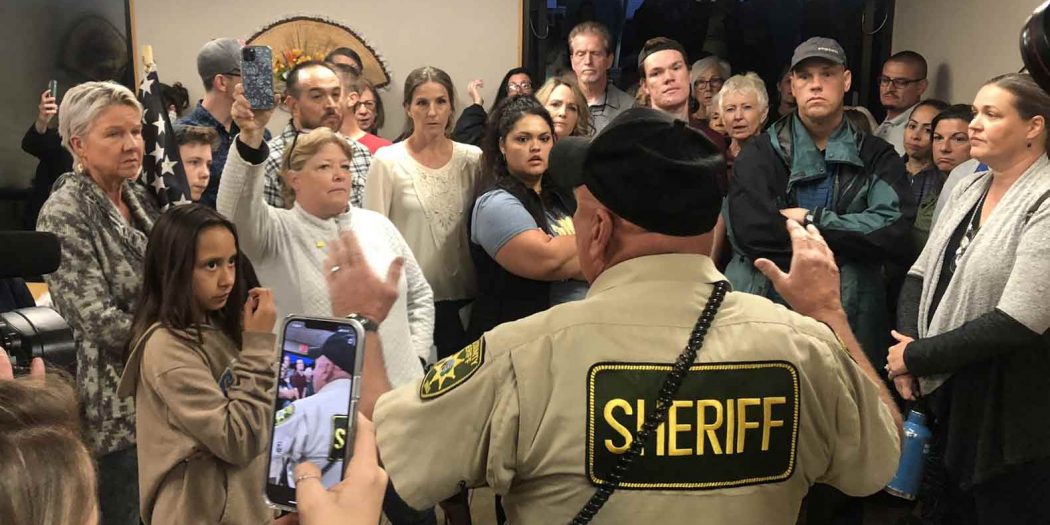 In Vail, Arizona, the Vail School District scheduled a meeting on how to move forward. A massive crowd of parents — tired of their children being forced to wear masks — formed outside in support of overturning the mandate and allowing their children to go maskless.

Just as the meeting was set to go live, however, officials on the school board suddenly canceled it and walked out of the office after several of the parents entered. In a cowardly move, the board members then dialed 911 to report the parents for being concerned about their children.

When Pima County Sheriffs deputies arrived, they found no reason for the call. The parents, while they were certainly concerned about their children, posed no threat, were entirely peaceful, and even cordial.

Due to concern that these individuals would not follow meeting protocols related to mitigating the COVID-19 virus, district officials said that they were “concerned that (they would) be unable to conduct the meeting safely,” prompting the cancelation of the meeting, reports KVOA.

“We will continue to work with the Pima County Sheriff’s Department to ensure the safety of our community for any future meetings,” the district said.

When KGUN9 asked the school board why the meeting was cancelled, an unnamed official told them that the crowd became uncontrollable. However, that was not the case at all and the entire ordeal, which lasted over an hour, was captured on video.

What’s more, when KGUN9 asked the sheriff about the school board’s claims that the crowd was uncontrollable, the sheriff told them that this was not true and crowd control was not an issue. Indeed, as the video shows, the parents were polite and when asked by deputies to exit the premises, they did so.

“They [school board] have the audacity to leave when we come here as peaceful parents to talk to them,” a parent is heard saying on the video.

After the school board officials vacated the premises, the parents invoked a legal procedure known as Robert’s Rules of Order.According to KNST, the parents then voted in a new school board.

That new board then voted unanimously to end the mask requirement in all Vail schools.

Whether or not this procedure holds merit remains a contested issue as school board members are elected in the city’s election process by voters. However, according to the person who took the video below, they claim the entire process was legal.

“Vail School Board violates Arizona open meeting law, refuse to hear from the people, and goes home. So, the People hold quorum, call their own meeting to order, elect a new School Board, and immediately vote to CANCEL the mask mandate – along with voting to disallow any medical procedure being forced on the children or employees. This is how you take back power from a tyrannical government.

Great work to the parents of the students in Vail School District.”

This type of resistance to mask mandates for children is growing across the country. While it is unclear if this move by the parents will work or not, their spirit to civilly disobey what they perceive to be a harmful order is inspiring.

Forcing people — including children — to wear a mask on their faces against their will has no place in a free society. The efficacy of masks alone should be enough to compel society to wear one, anything else is tyranny.