Patagonia Founder: ‘Earth Is Now Our Only Shareholder’ 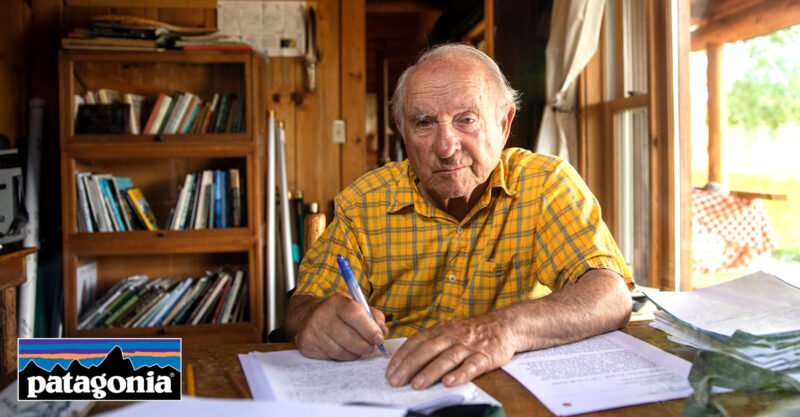 ‘Earth Is Now Our Only Shareholder’: Founder Gives Away Patagonia to Save the Planet

“Hopefully this will influence a new form of capitalism that doesn’t end up with a few rich people and a bunch of poor people,” said Yvon Chouinard. “We are going to give away the maximum amount of money to people who are actively working on saving this planet.”

“We needed to find a way to put more money into fighting the crisis while keeping the company’s values intact,” Patagonia founder Yvon Chouinard wrote in a letter explaining his family’s ownership decision. (Photo: Patagonia/Facebook)

The 83-year-old, his wife Malinda, and their adult children, Fletcher and Claire, gave away the company, valued at about $3 billion. The rock climber-turned-businessman explained the decision in an interview published Wednesday by The New York Times, along with a letter on the outdoor clothing retailer’s website.

“While we’re doing our best to address the environmental crisis, it’s not enough. We needed to find a way to put more money into fighting the crisis while keeping the company’s values intact,” Chouinard wrote.

“One option was to sell Patagonia and donate all the money. But we couldn’t be sure a new owner would maintain our values or keep our team of people around the world employed.”

“Another path was to take the company public. What a disaster that would have been. Even public companies with good intentions are under too much pressure to create short-term gain at the expense of long-term vitality and responsibility,” he continued.

“Truth be told, there were no good options available. So, we created our own.”

As the Times detailed:

“In August, the family irrevocably transferred all the company’s voting stock, equivalent to 2% of the overall shares, into a newly established entity known as the Patagonia Purpose Trust.

“The trust, which will be overseen by members of the family and their closest advisers, is intended to ensure that Patagonia makes good on its commitment to run a socially responsible business and give away its profits.

“Because the Chouinards donated their shares to a trust, the family will pay about $17.5 million in taxes on the gift.

“The Chouinards then donated the other 98% of Patagonia, its common shares, to a newly established nonprofit organization called the Holdfast Collective, which will now be the recipient of all the company’s profits and use the funds to combat climate change.

“Because the Holdfast Collective is a 501(c)(4), which allows it to make unlimited political contributions, the family received no tax benefit for its donation.”

The newspaper noted that “Patagonia has already donated $50 million to the Holdfast Collective, and expects to contribute another $100 million this year, making the new organization a major player in climate philanthropy.”

Chouinard told the Times that “I didn’t know what to do with the company because I didn’t ever want a company,” and called the plan an “ideal solution” for his family.

“I don’t respect the stock market at all,” he explained.

“Once you’re public, you’ve lost control over the company, and you have to maximize profits for the shareholder, and then you become one of these irresponsible companies.”

As he put it in the letter:

“Instead of ‘going public,’ you could say we’re ‘going purpose.’ Instead of extracting value from nature and transforming it into wealth for investors, we’ll use the wealth Patagonia creates to protect the source of all wealth.” 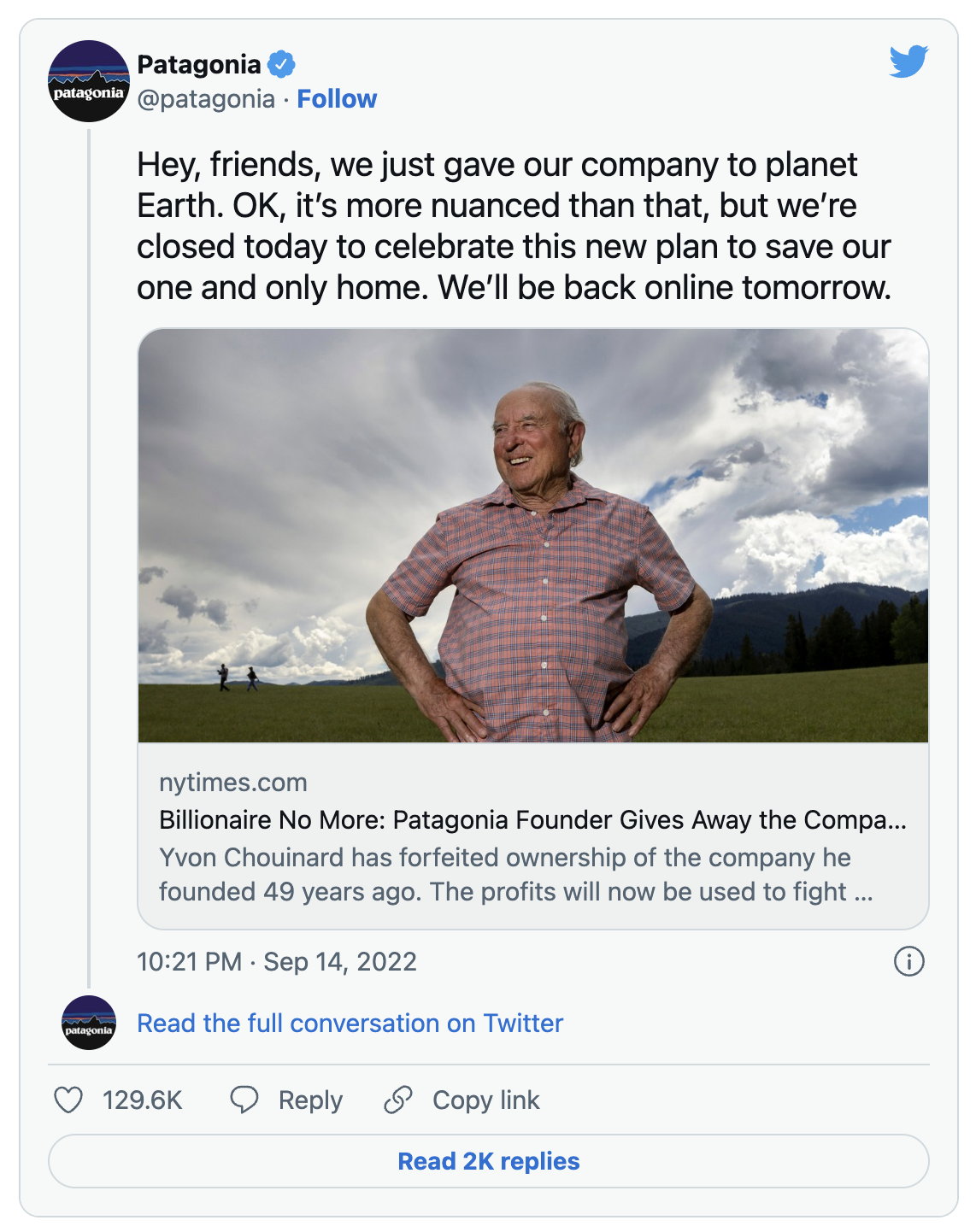 It was important to Chouinard’s children “that they were not seen as the financial beneficiaries,” he told the Times. “They really embody this notion that every billionaire is a policy failure.”

“I was in Forbes magazine listed as a billionaire, which really, really pissed me off,” he recalled. “I don’t have $1 billion in the bank. I don’t drive Lexuses.” 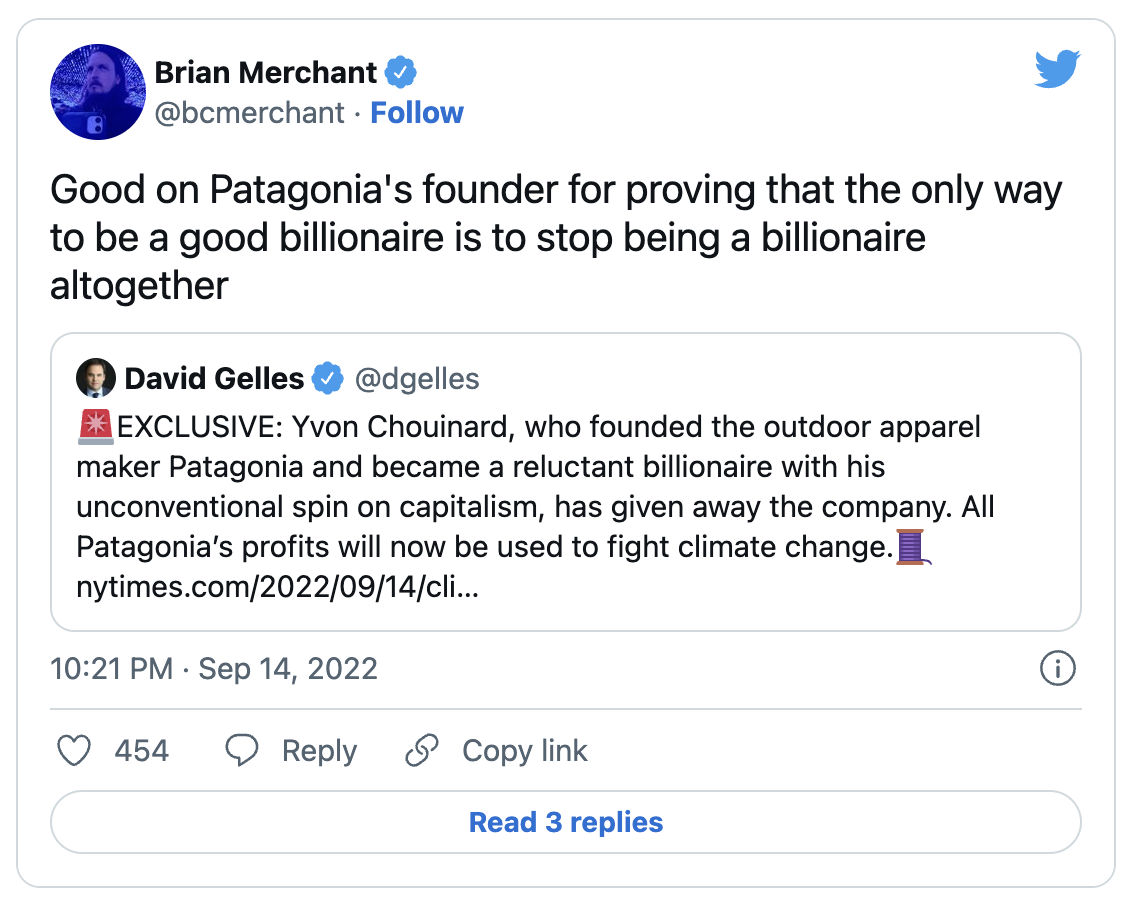 The family’s move was welcomed by climate action and conservation advocates.

“Patagonia has long been an incredible ally in the fight for climate justice — they’ve offered their stores, funding, and advertising for mobilizations and more — but this takes it to a whole new level. Kudos to the entire team.”

Marine biologist and policy expert Ayana Elizabeth Johnson said she “could not be more proud to serve on the board of directors” of Patagonia, and celebrated that “as of now, Earth is our only shareholder — ALL profits, in perpetuity, will go to our mission to ‘save our home planet.’”

Chouinard suggested the innovative approach could inspire action from others in the business world.

“Hopefully this will influence a new form of capitalism that doesn’t end up with a few rich people and a bunch of poor people,” he said. “We are going to give away the maximum amount of money to people who are actively working on saving this planet.”

As poet Amanda Gorman pointed out Wednesday, “The world really can be different friends.”

Jessica Corbett is a staff writer for Common Dreams.