Peak 2021 — US Gov’t Labels the Constitution, Bill of Rights as ‘Potentially Harmful Content’ 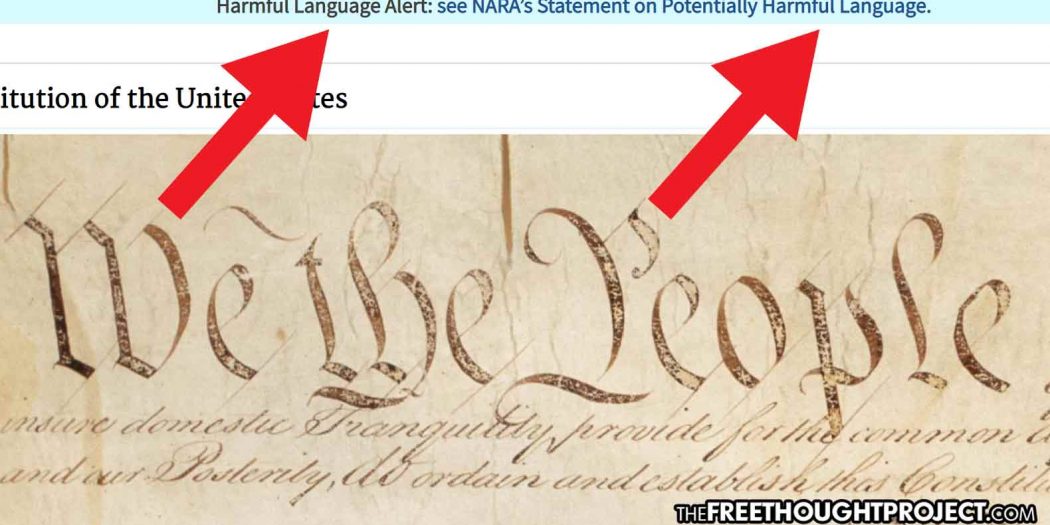 Peak 2021 — US Gov’t Labels the Constitution, Bill of Rights as ‘Potentially Harmful Content’

“In a time of universal deceit, telling the truth is a revolutionary act.”

Though the United States has been heading down a dark path for some time, in the last 19 months, we have gone from a slow trickle of tyranny to an outright deluge of fascist totalitarianism. We’ve seen people beaten and arrested for gathering in groups, tasered and assaulted for not wearing a mask, and government pressure to bring back segregation based solely on a person’s health choices. Vaccine passports went from a conspiracy theory in 2020 to a reality in 2021 and now it seems that nothing is off the table.

As Americans watch from the sidelines as their Australian counterparts become prisoners in their own country, it is only a matter of when, not if, that same police state tyranny comes here. The pandemic and subsequent government reaction has people who once stood against government overreach and the police state now begging for it — to keep them safe.

One of the largest power grabs in the history of the world has taken place as these fearful citizens willingly surrender their rights to the state for the promise of safety. But that safety will never come.

What did come, however, was a slew of arbitrary and often ridiculous mandates and decrees from politicians who think that government force and coercion can stop a pandemic. Despite the economically devastating draconian lockdowns that killed countless small businesses, vaccine passports, and mask mandates, COVID-19 is predictably spiking once more in areas who are due for their seasonal peaks.

Sadly, Americans have a short memory when it comes to giving up their freedoms for a false sense of security. When a society surrenders individual liberty to the state, the state never gives it back. And a new warning label on the National Archives paints an ominous picture of what’s to come.

The very documents which embody our God-given rights, inherent to every human being, has been labelled as “harmful content.” Seriously.

Both the Constitution and the Bill of Rights have been labelled by the National Archives with an alert, telling readers that they are about to read something “harmful.”

The link on the label leads to the National Archives and Records Administration (NARA) statement on “potentially harmful content,” defined as reflecting “racist, sexist, ableist, misogynistic/misogynoir, and xenophobic opinions and attitudes” or being “discriminatory towards or exclude diverse views on sexuality, gender, religion, and more,” among other criteria.

The archivists are told to inform the users about the presence and origin of such “harmful content,” update descriptions with “more respectful terms” and make “an institutional commitment to diversity, equity, inclusion, and accessibility.”

It is unclear as to when these changes were made since the internet archives in the wayback machine bring up blank pages for all the captures dating back years.

Tellingly, the warnings that appear on the Constitution and Bill of Rights do not appear on other documents within the National Archives. In the archive documents on Jim Crow, which uses the n-word multiple times, the warning is not there. It is also lacking from Appendix 16 of the 1964 Warren Commission Report on the assassination of President Kennedy, in which a Jewish slur is cited.

While this is likely just some silly way of appeasing the cancel culture and the government’s attempt to pander to the woke, the very idea of labelling the language which founded America as “harmful” is troubling — especially considering the last 19 months.

As George Orwell famously wrote in his essay, “Politics and the English Language,” this type of political language and manipulation “is designed to make lies sound truthful and murder respectable, and to give an appearance of solidity to pure wind.”