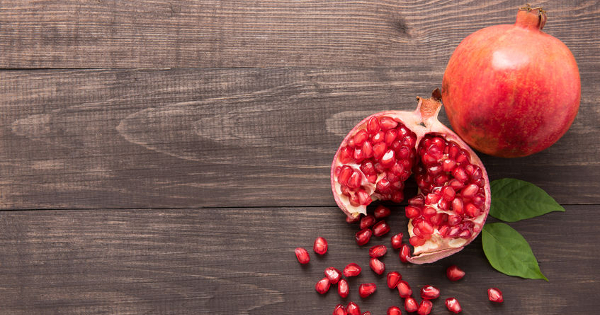 Pomegranate extract provides a natural way to boost athletic performance, increasing the time to exhaustion by more than 1.5 minutes among a group of amateur cyclists. Could pomegranate give you a similar athletic improvement?

Pomegranate, the “jewel of winter,” is one fruit you should have on your radar if you’re interested in boosting your physical performance. This applies not only to athletes but also to anyone who’s an avid exerciser — or wishes they were. By enjoying pomegranate, it’s possible that you could gain more stamina for your weekend jog or morning aerobics session, leading to body-wide benefits.

While pomegranate is perhaps most well-known for its antioxidant properties, impressive as they are, this leathery-skinned berry is also a rich source of dietary nitrates — and therein lies their performance-enhancing potential.

Writing in the journal Nutrients,[i] researchers conducted a study involving 26 amateur cyclists, who received either pomegranate extract or a placebo daily for 14 days.

They then engaged in an exercise session similar to a long-distance cycling race, such that they cycled for 90 minutes at moderate intensity, followed by a more intense stint, in which they increased their intensity every three minutes to the point of exhaustion, as you would in the final leg of a race.

After a five-minute recovery period, they then did six sets up barbell step ups (stepping up and down on a bench) to induce muscle damage, markers of which were subsequently measured, as was their eventual recovery.

Pomegranate extract significantly increased the cyclists’ time to exhaustion — by an average of 94 seconds. It also led to improvements in what’s known as the second ventilatory threshold, or VT2, putting it off by an average of 55 seconds.[iii]

Your VT2 is the point during exercise when lactate has accumulated in your blood, you need to breathe heavily and you can no longer carry out a conversation. By staving off these two markers, pomegranate extract could easily mean the difference between winning or losing a race — or in the case of your personal exercising, help you work out a little bit longer and faster.

The study also found that pomegranate extract could help to restore force in damaged muscles, bolstering a number of studies that have hinted at pomegranate’s benefits to muscle recovery.[iv]

At GreenMedinfo, we’ve collected 335 abstracts related to pomegranate research — a signal of just how powerful an ally this fruit can be for your health. In terms of exercise alone, consuming pomegranate makes sense and can:

One of the reasons why pomegranates are so great for performance is due to their nitrate content, which plays a role in the formation of nitric oxide during exercise. Nitric oxide helps blood vessels to relax, increasing blood flow to muscles.

As noted by the featured study, “PE’s [pomegranate extract’s] contribution to nitric oxide pathways could be due to its polyphenol content, which may protect the already produced nitric oxide against oxidative destruction, therefore enhancing its biological actions.”[v]

Pomegranate has been prized since ancient times as both a symbol of love and a powerful medicinal tonic, traditionally used for treating everything from parasites and snake bites to bronchitis and diabetes.[vi] If you’re willing to put in the effort to remove the arils — the juicy casings that enclose the seeds — you’ll be rewarded with multiple health benefits, not to mention a tasty treat.

For those looking to boost athletic performance, the featured study suggests supplementing with pomegranate extract for two weeks before a competition may be useful, but for overall health gains, you can also make a point to eat pomegranates as a regular snack.

In fact, when ranked according to Cumulative Knowledge, which is GreenMedinfo’s unique algorithm to gauge the depth and quality of information related to natural health topics, pomegranates come in at 968 — a solid score on a scale ranging from a low of 1 to a high of 8,191 (for all culinary herbs and spices).

Supplementing with pomegranate, for instance, may reduce oxidative stressthat occurs after an intense weightlifting session, helping to improve recovery between workouts.[vii] Its role in warding off inflammation is also well established, and this, along with its antioxidant properties, is another reason why it enhances recovery following exercise-induced muscle damage.[viii]

If you’re looking for an easy way to enjoy this powerhouse fruit, wash it well and slice it horizontally. While holding it firmly over a bowl (cut side down), simply hit the back with a wooden spoon until the arils fall out.

If you don’t plan to eat them all right away, pomegranate arils can be refrigerated in an airtight container or frozen for several months. They make a great addition to smoothies and salads, or eat them plain as a healthy snack.

What Else Helps Boost Athletic Performance?

Pomegranate extract is just one natural compound that athletes can use to boost performance and speed recovery. You can find a wealth of others at GreenMedinfo’s Athletic Performance research portal. From supplements like arginine, astaxanthin and whey to therapeutic actions including motivational self-talk, chiropractic treatment and qigong, both professional and amateur athletes can benefit from the performance-enhancing tools found in nature.