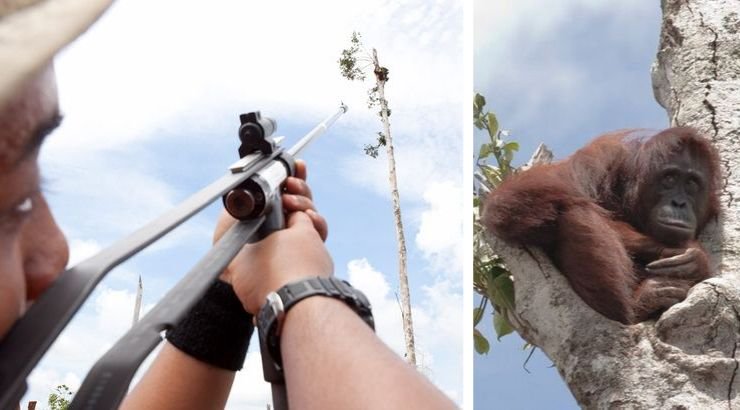 The orangutan population has been driven to the brink of extinction by human activity.

(TMU) — As rainforests around the world continue to be destroyed by human societies seeking profits in the lush jungle, wild animal populations who have lived there since time immemorial have seen themselves displaced, often with nowhere to go.

And in Borneo, an island in Southeast Asia’s Malay Archipelago, animal rescue workers filmed the tragic moment when a desperate, heavily pregnant orangutan clung to one of the final trees standing in her formerly pristine rainforest home—right up to the moment when massive bulldozers destroyed what was left of it.

Boon-Mee was so weakened and traumatized that she couldn’t imagine leaving the tree trunk where she found sanctuary as heavy machinery ripped apart what used to be her home.

As a result, she was unable to forage for food to feed herself or her unborn baby, meaning she had nothing to look forward to besides death by starvation.

Across Indonesia, palm oil plantations have laid waste to what used to be the homes of orangutans like Boon-Mee, rendering the primates homeless in their formerly lush, rich homes in places like Borneo and Sumatra.

Every year, apes face slaughter at the hands of humans in the big agriculture industry, either by gun or machete. Such trends are reflected in alarming new figures showing that the orangutan population falls by up to 25 per day.

A century ago there were over 230,000 orangutans in Southeast Asia, according to the World Wildlife Fund. However, that number has now plummeted to 41,000 in Borneo and only 7,500 in Sumatra—the only two places where they can be found.

However, this story has a happy ending, because in this rare case the plantation owners had a heart and reached out to UK-based charity International Animal Rescue (IAR) to seek aid for the expecting mom.

An IAR team backed by local forest officials arrived on the scene after several hours of journeying through a still-smoldering forest that had just been freshly burned. When they finally arrived, they were shocked to find not only Boon-Mee but three other orangutans.

Among the three was Charanya, another mom who had just delivered her baby and was desperate to find food. Kalaya had also apparently just had a baby, and was lactating and semi-conscious—leading the IAR workers to believe that her baby had either died or was kidnapped to be someone’s pet.

Boon-Mee was still alive, but just barely—and was surviving on only tree bark, thus making her too weak to climb down the tree.

Rescuers were forced to eventually shoot her with a tranquilizer before catching her in a net.

“It’s heartbreaking to see the appalling state of these animals as their habitat is razed for the palm oil industry – they were weak from hunger. It’s a small comfort that this time rather than chase them off or kill them, the company did the right thing and contacted us.”

Palm oil is a vegetable oil that is extracted from the fruits and seeds of the oil palm—also known as the African palm—and is a common additive on supermarket shelves across the globe.

Oil extracted from the fruit of the palm is not only used in foods like instant noodles, yogurt, ice cream, and wine, but is also used in biofuel and a range of household products including laundry detergents, shampoo and cosmetic goods like lipstick.

Roughly 66 million tons of palm oil are produced each year, driving a trend that has seen forests burned and land robbed to make room for plantations, contributing greatly to global deforestation and the displacement of not only rural human populations, but local animal species endemic to the region.

Palm oil production has largely driven orangutans to the brink of extinction, with the species now classified as critically endangered. Bornean orangutan populations have fallen by more than half between 1999 and 2015.

Since you’re here…
…We have a favor to ask of you. We need your support to continue publishing as we do.. If just a small fraction of our visitors became subscribers, we’d have enough funding to stop running ads and reduce our dependence on big tech companies like Facebook and Google. Will you help make this a reality? Click here to learn more.