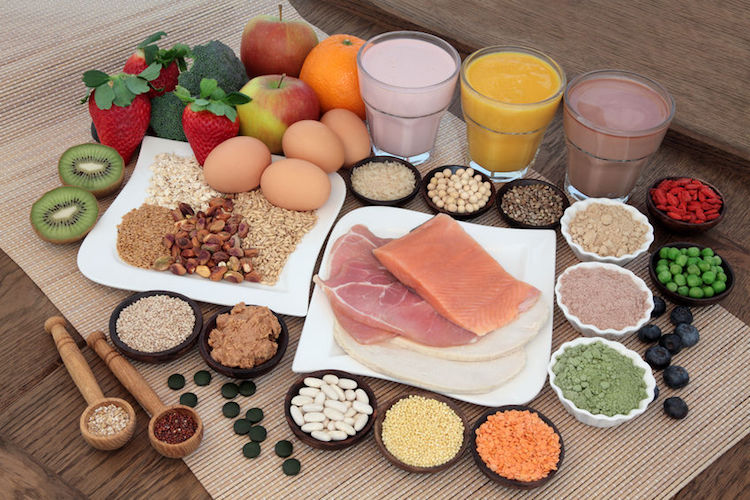 Nutrient deficiencies can cause countless ailments and diseases.  However, eating the proper foods and supplementing certain nutrients can reverse poor health and reduce your risk of illness.

The cost of health care is skyrocketing.  A recent news report indicated that the premiums for “Obamacare” (The Affordable Health Care Act) health insurance will likely increase by 25% in 2017.1 The current president will likely respond to this announcement with claims that Obamacare should be abolished, or that pharmaceutical companies are taking too much profit.  There are many reasons why healthcare costs have risen so much, but it is unlikely that the real cause of this healthcare crisis will be part of this political discussion.

The real reason for these high costs is the state of health of Americans.  In the past 60 years, the percentage of the population suffering from a chronic disease has risen from 10% to over 60%.2 A British economist has estimated that 100% of the GNP of the United States will be consumed by the cost of health care by the year 2065.3  And the number one cause of this astronomical increase in the cost of health care, according to every knowledgeable health expert, is nutritional deficiencies.4

Where is the proof for such an outrageous statement?  In 2010, the National Cancer Institute did a study of more than 14,000 people, aged 2 to 80, and could not find one person with a truly healthy diet. In fact, a vast majority of these people were deficient in 11 out of 14 nutritional categories.5 How can this be true in the proverbial “land of plenty”?

The obvious answer is that most people are just not eating enough of the right foods, and our medical profession is doing a terrible job of preventing illness.  It’s just not what they do. The reasons?

(Note: For a more detailed explanation please see Exhibit I.)

What are the most dangerous nutritional deficiencies?

Many nutritional deficiencies should concern us all, but there are ten that deserve some immediate attention by most people:7

Unfortunately, the medical profession does not usually test for deficiencies in any of these nutrients, so what are we to do? (For actual deficiencies see Exhibit II.)

The symptoms of nutritional deficiencies, and the best sources for nutrients:

People can watch for specific symptoms and undergo certain tests to determine if they are deficient in any of these key nutrients.  Sources for these nutrients may be found in the foods we should be eating as well as in nutritional supplements that have been scientifically proven to contain equivalent nutrients.8

Some of the best sources of Vitamin D:

The desired levels of key B vitamins are as follows:

Some common vitamin B deficiency symptoms:

Some of the best sources for B vitamins

Some of the best sources of omega-3 fats:

Our bodies make some digestive enzymes naturally in the pancreas, but this process declines over the years as a part of the aging process.  By some accounts, as much as 50% of natural enzyme production declines by the age of 50.  That is why some people decide to supplement with enzymes in order to assist in the digestion process.  This is especially needed for food that has been cooked.13

Some common signs of enzyme deficiency:

Some of the best sources of enzymes:

There are more than 3,700 sites on human protein cells where magnesium is needed in order to promote detoxification, produce antioxidants, such as glutathione, and transport insulin and glucose into every cell to make energy. And, while magnesium is the fourth most abundant mineral in the body, more than 80% of us suffer from a magnesium deficiency.  When magnesium is not at sufficient levels, people can experience heart attacks, diabetes, depression, strokes, and much more.

The average adult needs about 500 mg of magnesium every day, but for those who exercise, this requirement could be five or ten times higher, depending on the intensity and the duration of the exercise.  Many athletes or weekend warriors are unaware of this need for higher levels of magnesium and experience dire consequences as a result.14

Some of the best sources of magnesium:

The recommended daily allowance for vitamin C is 60 mg, but this will only help in cases such as the prevention of scurvy.  It is really a minimum daily allowance, and most scientists agree that about 2,000 mg are needed daily to prevent chronic illness.  Larger amounts of 10,000 mg or more have been used orally to treat illness, while 50,000 mg or more intravenously have been used for cancer.15

Some of the best sources for vitamin C:

Lutein and zeaxanthin fight free radical damage in the eyes, slow the development of cataracts, and generally prevent macular degeneration.  Lutein is also valuable in the protection of our skin, the prevention of diabetes, and the prevention of cancers, including breast and colon cancer.16

Some of the best sources for lutein and zeaxanthin:

While some CoQ10 is produced in the body, it is usually not enough to meet our daily needs, especially if we reduce our consumption of dairy and red meat.  CoQ10 is most needed by organs with fast metabolism, such as the brain, the heart, the liver, the kidneys, and the lungs.  For this reason, CoQ10 has been proven to prevent diseases associated with these organs, as well as reversing these same diseases in many cases.  In one study, 50% of patients on dialysis were able to get off their kidney support machines by taking 180 mg/daily of CoQ10 for three months.  Similar results have been shown in studies on heart disease, liver disease, and even Parkinson’s disease.17

Some of the best sources of CoQ10:

*Note – These food sources typically contain from 1 to 3 mg of CoQ10 per serving, while the recommended dose is 100 mg/day.

Some of the best sources of vitamin E:

This article is an overview of just ten of the most important nutrients that are commonly deficient in the average American diet. The science behind these stated deficiencies is excellent, as can be seen by the references provided. Naturopathic Doctors and Holistic Medical Doctors are usually very qualified to help diagnose and address these and other nutritional deficiencies.

As a starting point for good nutrition, people should refer to the Harvard Food Pyramid, which is based on the longest and most scientific evaluation of health ever conducted in America. To access more information on the use of nutritional supplements to prevent and reverse chronic disease, please go to www.LEF.org. where you will find hundreds of scientific references for more than 300 health conditions.

It is very clear that most people are not eating as well as they should.  The guidelines presented here describe how to get more of the key nutrients everyone needs to become healthier.  The following exhibits can help to explain how these deficiencies have occurred.

According to a study completed in 2010, of 14,000 people aged 2 to 80, the number of participants with deficiencies in one or more key nutrients was 100%.  In fact, a majority of the study’s participants were deficient in 11 out of 14 major food categories that are vital to good health.  The Centers for Disease Control reported similar findings a few years ago when they reported that over 90% of the population had one or more nutritional deficiencies.  This current study simply indicates that the problem is just getting worse with each passing year, and the growth in chronic disease mirrors this nutritional deficiency pattern.

These chronic illnesses — for example, cancer, heart disease, diabetes, arthritis, macular degeneration, depression, and irritable bowel syndrome — are all caused by poor nutrition or are contributed to significantly by poor nutrition.  Genetics is only responsible for 10-20% of these diseases, and even these genetic tendencies can be controlled, and even reversed, in many cases, with good nutrition.  Other contributing factors include smoking, alcohol consumption, lack of exercise, too much stress, and environmental toxins, but food is the most significant factor beyond a shadow of a doubt.

Many things contribute to the nutritional deficiency crisis in America. Here are the factors mentioned most frequently in scientific studies:

The overall impact of these nutritional depleting factors can be the loss of nearly 80% of the nutrients that nature intended to be in our food.  If we ate locally grown, organic food without overcooking it, and by eating it properly, we could actually get most of the nutrients we need from our food.  Obviously, most people are not doing this, or we would not be seeing the alarming statistics on nutritional deficiency and chronic disease that were previously reported.

Nutritional scientists have identified specific nutritional deficiencies when comparing the Recommended Daily Allowance of each nutrient to the Optimal Daily Allowance.  The ODA is necessary to prevent chronic disease. 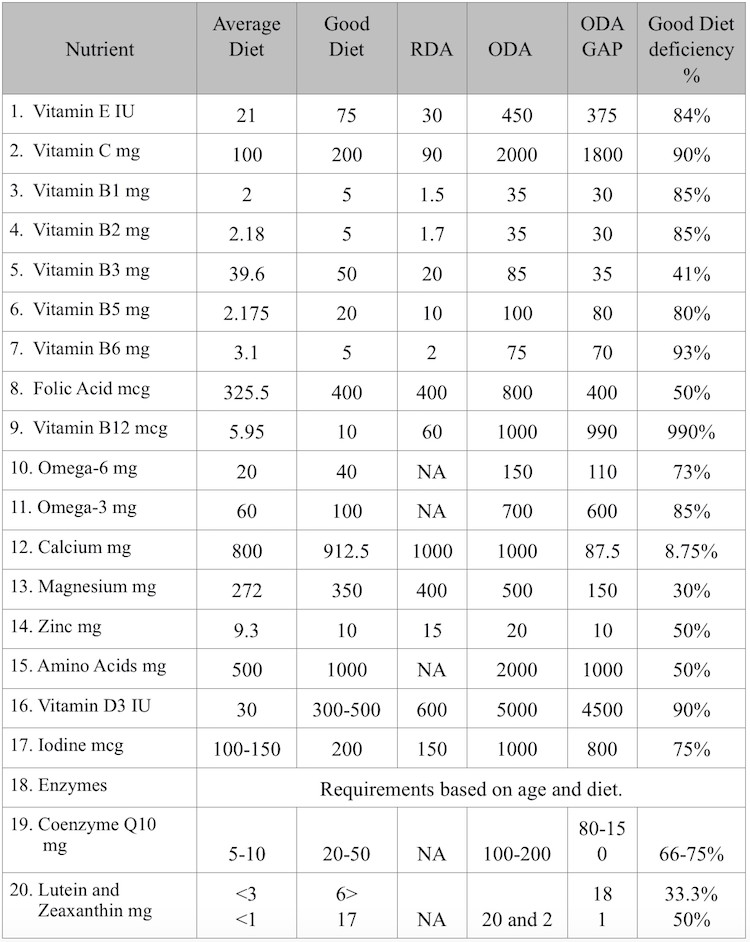 Nutritional deficiencies should first be met with food.  The following list includes excellent food sources for counteracting common nutrient deficiencies.  An excellent diet can satisfy 75% of the ODA.  The remaining nutrients must be obtained from quality supplement sources. 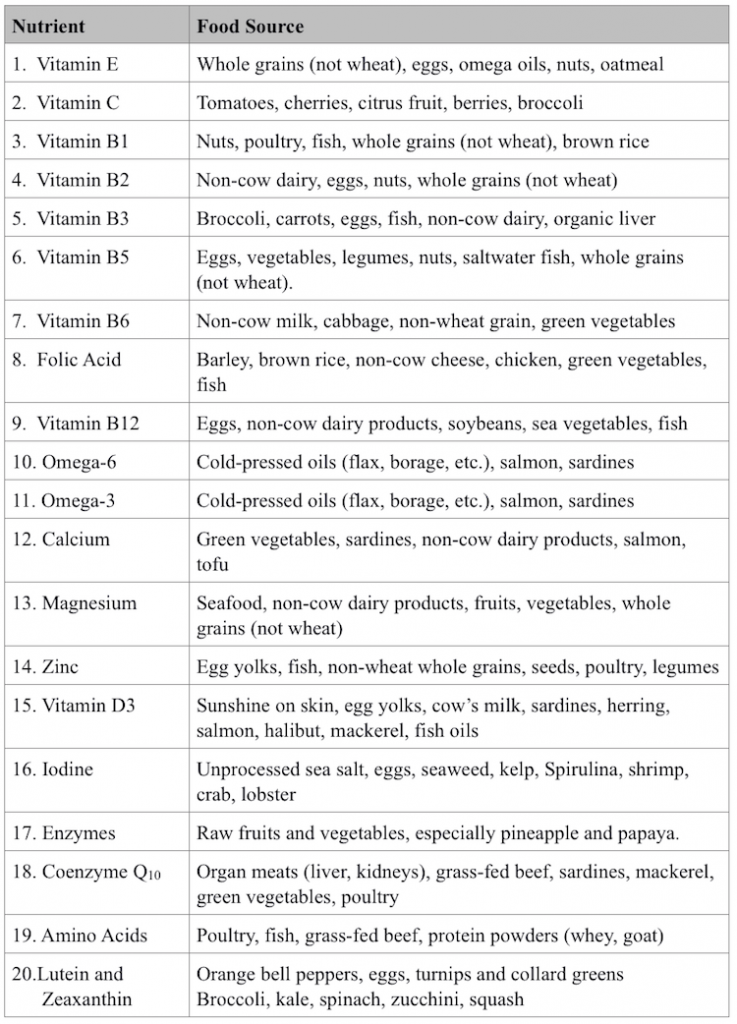 Exhibit IV – The Impact of Cooking on Nutritional Values

Most people have no idea how many nutrients are lost in the cooking process.  Nearly all of the enzymes are lost, which makes it very difficult for the food to be broken down and delivered to the cells properly.  Also, the cooking process depletes many vitamins and minerals.  Here are some of the key nutrients required by our cells and how much is lost in various cooking or preservation processes. 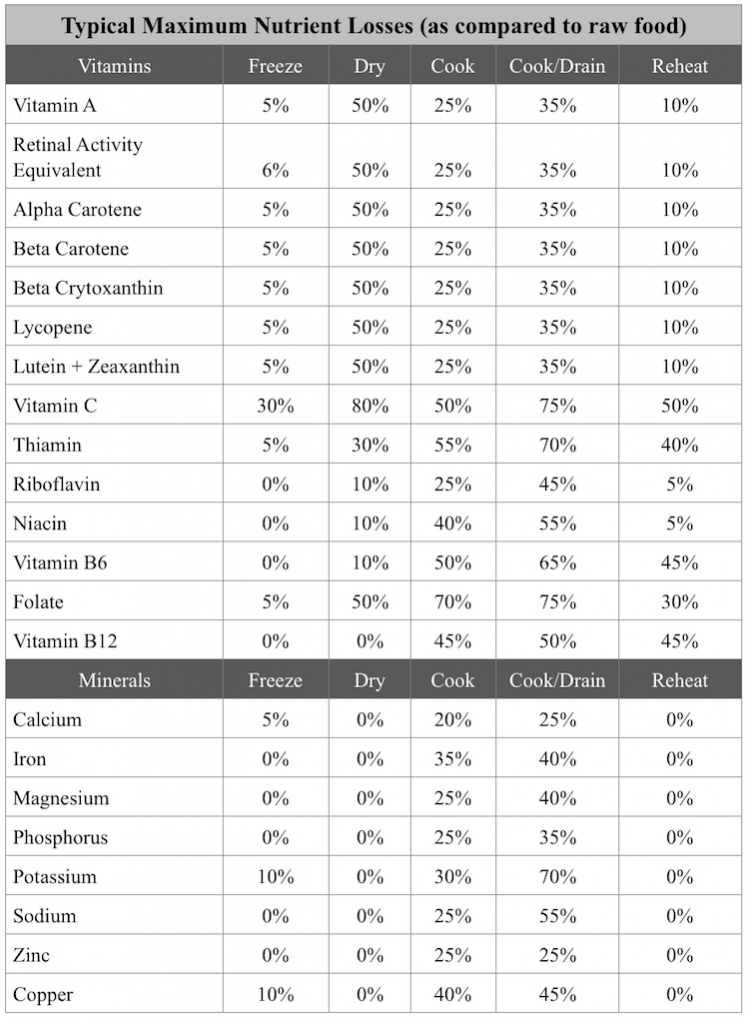 The Case for Antioxidants

Note:  Even if you eat perfectly, digest perfectly, and assimilate perfectly, it would still be virtually impossible to get all of the nutrients you need every day.  Supplements are absolutely needed.

Charles Bens has a Ph.D. in nutrition and uses Functional Medicine as the foundation for his wellness consulting company Healthy at Work in Sarasota, Florida. He uses nutritional education, along with other natural wellness tools, to help employees make difficult lifestyle changes such as losing weight, smoking cessation or the prevention and reversal of chronic illnesses such as Type 2 diabetes. Employees seem to appreciate the impressive science behind these educational programs which include workshops, webinars, newsletters, articles and online coaching. In this article Dr. Bens presents the compelling science behind Functional Medicine, which clearly illustrates that this natural approach is safer, more effective and much less costly then the conventional approaches used by most employers and their healthcare providers.