Punch Fear in the Face 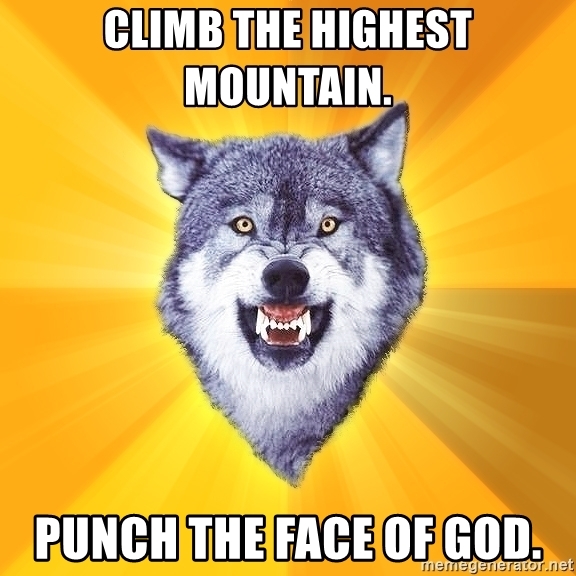 Punch Fear in the Face

“Do not wait to strike till the iron is hot; make it hot by striking.” ~William Butler Yeats

Life is short. We have from this day until the day we die to live the life we want to live. We only have this moment, and a finite number of moments after it, to begin something new, to create something that has never been created before, to fall in love with doing what we love to do.

The problem is that we get hung up on “being ready.” We shirk the moment and look forward with blind hope to some future moment, or to some pie-in-the-sky afterlife, thus forsaking our mortality at the expense of our Immortality Project. We become so focused on the possibility of failure that we fail precisely because we never begin. We fall victim to the victim mindset: self-inured, self-preserved, self-placated, self-pitied.

If we wait until the iron is hot to strike, we might not ever strike. But if we strike now, we might just create enough of a spark to make the iron hot on our own terms. Then we’re ahead of the game. Then we gain the strategic advantage of getting out of our own way. By going all in, we go beyond. By diving in, we transcend.

Ready is a myth:

“True stability results when presumed order and presumed disorder are balanced. A truly stable system expects the unexpected, is prepared to be disrupted, waits to be transformed.” ~Tom Robbins

“Ready” is a myth. The perfect time doesn’t exist. Or, if it does, it doesn’t matter because we can’t know it. The only way to cover enough bases with the hope of catching the “perfect time” is to begin the game. Step up to the plate. Strikeout. Strikeout a lot! Then strikeout some more. Eventually you’ll hit a ball or two. Eventually you’ll make it to first base. Will it be the “perfect time”? Probably not. But that’s okay. Prefect is also a myth.

However, the imperfect time does exist. That time is right now. We shouldn’t wait to begin when we’re ready. We should begin before we’re ready. When we begin before we’re ready, we’re more likely to get better quicker. Sure, we’re also more likely to fail quicker. But as long as we’re learning from our failures, as long as we’re treating failure like a whetstone, we will continuously self-improve, and our sword will get sharper.

The Imperfect Time is a qualifier for moving forward. We begin with gusto, we start with heart, we follow our nudges and our inspiration, and we let the unfolding begin.

Besides, not being ready is fertile ground. It’s the blankest slate in the universe. It’s unconquered territory. It’s the deepest ocean. Not being ready to do something we love, is the best excuse ever to begin doing what we love. It is precisely because time is so short, and that we only have this one life (as far as we know), that waiting for the perfect time is much riskier than acting on the imperfect time.

The art of life is diving into the masterpiece and painting our wings on as we fall. Creativity doesn’t only come from talent (which takes practice), it also comes from vulnerability (which also takes practice). And the only way to practice creativity is being creative. It’s the courageous and vulnerable act of creativity itself that makes us more creative. It’s taking a leap of courage out of “safe waters” and jumping into the deep end of imagination and learning how to swim along the way.

As John Burrows said, “Leap and the net will appear.”

Action is where transformation happens:

“Whatever you can do, or dream you can, begin it; boldness has genius, power, and magic in it.” ~WH Murray

Understand: this is not a treatise advocating for no preparation at all. No. It is a motivational tool that you can use to leverage what preparation you already have by putting it into action. All the preparation in the world won’t help if you don’t put it into action. And action will better prepare you than non-action ever will.

So, it stands to reason that if you’re in a place of complete lack of preparation, then preparation through action will always be more strategic than preparing to act. Especially when it comes to creating something new or doing something that has never been done before.

When it comes to beginning before you are ready, it’s more about making the best of the worst than it is about being prepared for the worst. But there’s nothing saying your preparation won’t drastically improve by making the best of it. The mountain is the sharpening stone; you are the sword.

Remember: the mountain is a metaphor for something great: a work of art, a new business, a novel, a new adventure, an Immortality Project that has the potential to help the evolution of the species. Or maybe it is literally climbing a mountain. Either way, quality will come from quantity as long as you remain curious, skeptical, and you can learn from your mistakes.

Quality will come from quantity:

“Strategy is a mental process in which your mind elevates itself above the battlefield. You have a sense of a larger purpose for your life, where you want to be down the road, what you were destined to accomplish. This makes it easier to decide what is truly important, what battles to avoid. You are able to control your emotions, to view the world with a degree of detachment.” ~Robert Greene

If quantity is the sharpening, then quality is the sharpness. On the finite battlefield of life, the more sharpening strokes you take (practice), the more likely you are to become sharper. This is the idea behind quality coming from quantity. Practice will equal improvement as long as we don’t plateau, or get stuck in a rut, or become complacent.

Everything changes. Nothing stays the same. Feel the rawness of that fact, the bleeding-meat quality of it. It’s tragically delicious. It’s enchantingly heartbreaking. There is a kind of terrible beauty to it, without which we wouldn’t have such concepts as meaning, beauty, and love. For it is precisely because things end that we must inject them with symbolic meaning. It is precisely because we will die that we should get busy living. What more incentive do we need to begin before we’re ready?

The difference between day one on Mount Courage Wolf and day 101, or even day 1001, will be like night and day. The high quality of your climbing skills will have come from the quantity of practice hours you have put into it. You went from being a dull speck of coal to being a sharpened pearl of a diamond. Your sword has become razor sharp. If, as Hattori Hanzo said in Kill Bill, “on your journey, you should encounter God, God will be cut!”

And all because you didn’t wait for the perfect time to begin. All because you decided, with courage and hunger and fierceness, to seize the moment and begin at the imperfect time. Win or lose. Success or failure. Majesty or tragedy. And more than likely a mix of all of that. It was always a matter of beginning and then making the best of how things turned out. As the Buddha said, “There are two mistakes one can make along the road to truth: Not going all the way, and not starting.”

In the end, you transformed fear into fuel for fearlessness. You got out of your own way. You seized the day. You started. You transformed your wishbone into a backbone, and you did the damn thing!

This article (Punch Fear in The Face) was originally created and published by Self-inflicted Philosophy and is printed here under a Creative Commons license with attribution to Gary Z McGee and self-inflictedphilosophy.com. It may be re-posted freely with proper attribution, author bio, and this statement of copyright.