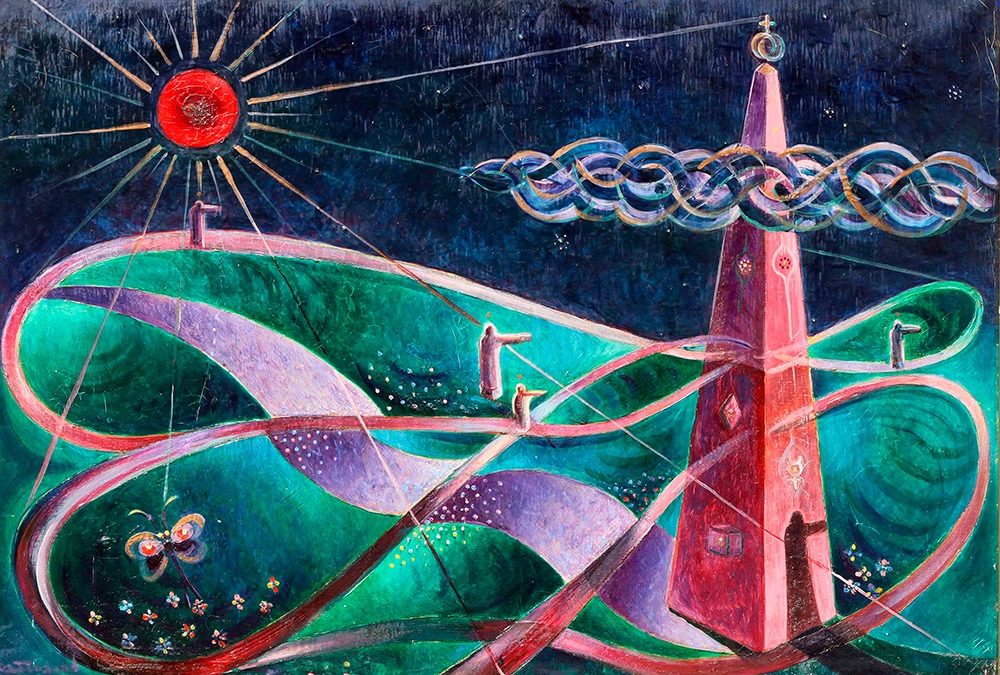 When we look up into the night sky and see the sparkle of stars, we are awed and enchanted. There is grace, there is wonder, and there is the excitement of the unknown. Everything comes alive with possibility. There is an enchanted world out there, and it beckons to us through a communal mystery. And we wish to respond to that call, for underlying all life is the urge for meaning. As human beings we desire, long for, need a sense of meaning and purpose in our lives. An enchanted universe serves to entice us with a feeling of belonging. Yet somewhere along the way we lost the sense of communion.

Once, humanity felt a common destiny with its environment, both terrestrial and cosmic, and this encouraged a mode of direct participation. Long ago, the environment experienced by humankind was an immersive space, an inclusive matrix that involved the individual in each moment of their lives. Our ancestors did not stand away from life—they participated directly in its enchantment. This merger between being and environment established a psychic wholeness in humans. Our ancestors were not estranged from the world in the way that modern humanity is. In the last few centuries especially, humankind has increasingly expunged itself out of its own mystery and thrown itself out of the realm of enchantment. Modern scientific, rational consciousness is an alienated consciousness, afraid of its participation. It views the world as an outside observer; a world of objects that move in mechanical motion. This alienated consciousness has substituted the enchantment and mystery with a smear of artificiality. The cosmos of human “being and belonging” thus became tainted with the contagion of the human mind. Yet this is not how things are, it is only the latest picture of how things seem to us. We have been forced to construct our own meanings about a world we have let slip from ourselves. In other words, we have disenchanted ourselves from a living cosmos.

The modern landscape is now more scattered with administration than adventure. The central image of our age has been that of consumerism: the ability of the average person to buy the material goods they require in order to have a decent standard of living. This industrial rhetoric applauded the factory worker’s ability to afford the goods they were producing, thus becoming the marketplace itself. Many commentators saw this as the modern individual buying into the system and merging with its insipid ideology. Only recently have some acute observers come to realize that consumerism has morphed into an idiosyncratic crash therapy for people to buy themselves into getting away from the system. The easy acquisition of things has become more about trying to cover up anxiety about the self; a way to placate the anomie and disguise one’s ennui. Consumerism is nothing more than the expression of a creeping world-weariness. Our eyes have barely been peering over the brim of our little self worlds.

The inner psychological landscape of many has become infected with this weary contagion. We have now been put on guard to protect our psychic spaces, and also to fend off forces that, intentionally or not, serve to damage and plunge our thoughts into despair. The game playing that has become our lives divorces us from our real sense of self, which then retreats further inward into the deep recesses of our being. Modern life is now rife with false selves parading as authentic entities. This disenchantment became our dominant lens in which we looked out at the world around us—and at the cosmos, too. Everything continued to be one grand accident, a colossal conglomeration of chance and chaos. That was just how life came to be.

The modern history of the West has been about the removal of mystery, mind, and magic from the world around us. Modern Western consciousness defines itself by its very removal from the world “beyond.” It also unfairly labels all past thinking as not only incorrect, but primitive. That is, we tell ourselves that our understanding of the world has developed and improved in a linear fashion. Thus, all earlier thinking and mental notions were inferior and “unscientific.” Humankind erroneously positions itself on a belief of linear progress, which is mechanical and immature. Previous worldviews are seen as misguided, illegitimate, and lacking sophistication. And yet we wonder little about how our descendants will look back upon our own current prognosis.

Whether we call our present age the modern or postmodern, the underlying current is the same. So many people seem to be spending their lives not in fear of what may happen to them, but in fear that nothing will happen to them. This malaise has, for many, been turned into an expression of anger and harm, both self-directed and toward others. It is ironic that the very institutions of learning and meaning have recently (in the US predominantly) become the very sites of violence, terror, and meaningless murder. This psychic space, where reality and unreality is in conflict, is a response to our dominant state of consciousness. And yet the consciousness of each age makes its diagnosis, and often unfairly dismisses what came before. For example, we find it extremely difficult to have a grasp upon the consciousness of premodern human society.

The dominant paradigm of human consciousness until recently was largely constructed from the scientific, rational worldview. This is now undergoing a profound transformation as we have entered a period of transition. During such times of change, the impulse for meaning and significance becomes a more prominent and necessary urge. In such moments of socio-cultural transformation, when bases of knowledge are revised and our constructions of reality questioned, the need to seek the self grows stronger in the individual.

The rationalist consciousness  contained its own built-in limitations, such as its separation from, and disenchantment of, the cosmos. This perspective could only survive for a few centuries—those centuries that were dominated by scientific rationalism and its mechanical universe. The modern scientific paradigm (the ‘Cartesian-Newtonian’ model) like the religious paradigm of the seventeenth century, now finds itself unable to be maintained. This is how things unfold; one set of structures, systems, and viewpoints are eventually outmoded and, through necessity (among other factors) get replaced, or rather updated, by a new set. This new set then defines the dominant consciousness for the new era. New values too come to the fore to represent the emergent expression of consciousness. In such transitional times there is urgency, opportunity, and an interior push to reconnect with a sense of meaning, both personal and cosmic. In other words, there is a fundamental need to understand one’s self and its place in the larger scheme of things. The instability we encounter in the world around us only convinces us further on the need to find the roots that connect us with a more permanent stream of knowledge and meaning.

By the time we look back on our last few centuries future historians will see the Cartesian-Newtonian paradigm as a relic. It will be viewed as a curiosity of mind that created rapid industrial expansion and scientific knowledge, yet failed to bring real progress upon the essence of human beings. Its spurt, which lasted several centuries, may be likened to a primitive rocket booster that propels a ship into orbit only to be spent and cast off, to fry up and dissolve as it falls back down to earth. The last few centuries were a single evolutionary episode that ran its course. In anthropological terms, it was a mere blink of an eye. And in that blink, humanity brought itself to the brink of collapse. Yet at the very last step, it seems it has pulled itself back onto the path as a new evolutionary epoch pushes through with disruptive labor into planetary birth.

We are in the midst of that birthing transition now, as the collective mind of humankind seeks solace in a new era of communion with an enchanted, sacred cosmos. We are not so much in a new age, but rather in a new gnosis, where so many revolutionary—or rather evolutionary—strands of the enlightening fabric are weaving together to form a new tapestry. We have the discoveries of new science—of the quantum world in physics and biology—mingling with new technologies of the outer and the inner world. We have various mystical traditions mingling through mixed cultures and pushing ancient knowledge into the mainstream; and the inner landscape of humanity is being increasingly traversed and mapped through exploratory and psychic tools. The digital, virtual words are augmenting our sense of material reality, and the deep cosmos is exploding into revelation and being revealed.

The great sacred mirror of the human self is reflecting back to us every known atom that ever sprang out of the creative matrix of existence. It is the age of momentum, acceleration, exposure, disclosure, invention, innovation, exploration, and Gnostic understanding as never before on such a widespread scale. It is nothing short of a profound planetary movement—a bright light of great awe and epiphany. It is a truly miraculous age to be witness to what is unfolding. We are now aiming toward a new stage of human fusion on a planetary level.

Humanity longs for unification, for an integral empathy of relations and communion. The medieval mind referred to this as a form of sympathy, of correspondences, between things; a merging between object and subject where distinctions become their attraction. This is the sacred reality that needs to be reinstalled into the collective consciousness of humankind. And it has been there all along, swimming around in our mythic archetypes below the thin surface crust of the conscious mind. Now it is awakening, and the new era emerging will have no alternative but to encourage, embrace, and celebrate this sacred revival of an enchanted cosmos.

Kingsley L. Dennis is the author of Bardo Times: hyperreality, high-velocity, simulation, automation, mutation – a hoax?, The Phoenix Generation: A New Era of Connection, Compassion, and Consciousness, and The Sacred Revival: Magic, Mind & Meaning in a Technological Age, available at Amazon. Visit him on the web at http://www.kingsleydennis.com/.