How Regenerative Farming Methods Can Restore Ecology and Rebuild Communities 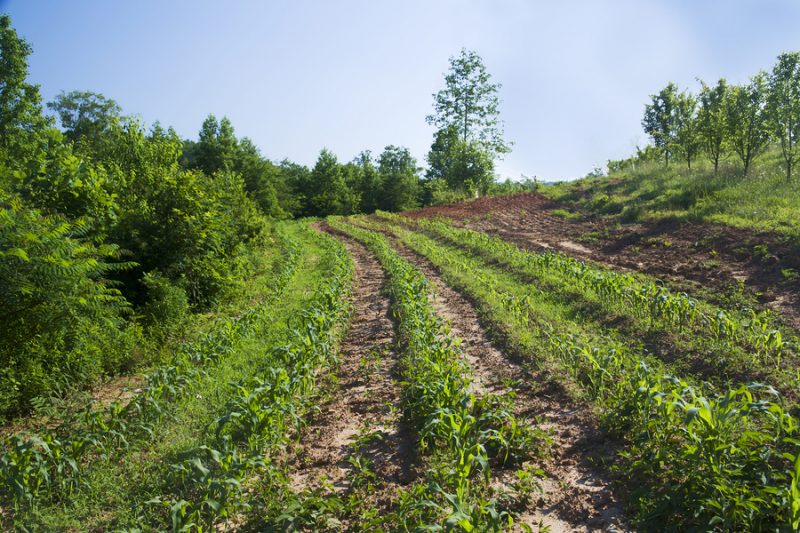 How Regenerative Farming Methods Can Restore Ecology and Rebuild Communities

But while beef and other animal products are the commodities being sold to the public, what Harris is really producing is healthy soil, and the success of his farm is a great demonstration of how you can accomplish the conversion from conventional to regenerative agriculture.

From 1946 — when his father was still running the farm — to 1995, the farm used industrial farming methods and chemicals. Harris had just one focus: how many pounds of beef he could produce at the lowest price possible.

Today, such concerns no longer occupy his mind. Instead, he’s wholly absorbed in figuring out how he can make the land thrive even more. Instead of feeding cattle, he now says his business is built around feeding microbes in the soil — all those crucial microorganisms that in turn make the soil fertile.

Because while the fertilizer they laid down each year helped the crops grow, what they did not realize was the damage being done underground.

Synthetic fertilizers actually harm the microorganisms in the soil, without which soil degradation sets in, nutrition (both in the soil and the food) goes down and, ultimately, the entire ecosystem begins to suffer.

As time went on, despite always turning a profit, Harris became increasingly disenchanted with the way his farm was progressing, looking and feeling ever more like a factory than a farm. When he heard people were looking for grass-fed beef, he saw an opportunity to make some changes.

He began by giving up feeding his animals corn, subtherapeutic antibiotics and hormone implants. Initially, that’s as far as he had intended to go.

But in time he realized that “using chemical fertilizers on pastures was as wrong as using hormone implants and subtherapeutic antibiotics,” he says. The transition was by no means an easy one.

He went from being debt-free to taking out $7.5 million in loans to build the processing facilities he needed — an operation that lost money each and every year to boot. There were dark times, when he didn’t know whether he might lose the farm that had been in the family for more than 130 years.

“We took incredible risks,” he admits. “Today I’m very glad I made the changes that I made, because the farm is again profitable; cash flow positive, and two of my daughters and their spouses have come back to work on the farm. At least that last part would not have happened in the earlier scenario.”

In addition to cattle, Harris now has free-range goats, ewes, pigs, chickens, geese and ducks on his farm. This mix of species brings a much needed synergy to the whole system. They form symbiotic relationships where one species helps keep parasites from overwhelming another.

For example, after a pasture has been grazed by sheep and cattle, chickens are moved in. The portable chicken coops are moved each week to give the chickens a fresh new spot, free of pathogens and parasites with plenty of food for them to feed on.

Also, chicken manure becomes toxic when concentrated, but by spreading it around more thinly, it provides valuable nutrients for soil microbes.

Flies that pester the cattle and spread disease will lay eggs in the cow manure. By moving the chickens in after the cattle, the chickens will scratch the manure and eat the larvae, thereby disrupting the life cycle of the flies and keeping this cattle pest in check naturally.

One of the primary purposes of keeping goats is to strategically manage vegetation in lieu of toxic herbicides, as they gnaw weeds down to an extremely low level. Also, the plant species that goats prefer are different from the ones cattle prefer, so keeping both together is a very effective form of “broad spectrum” weed control.

Harris no longer uses any kind of chemical fertilizers or pesticides on his farm. He’s also quit tilling. As a result, the farm and the land as a whole is teeming with life that was not there before.

The organic matter in the soil — which is a good indicator of quality — has gone from 0.5 percent to more than 5 percent in the past 15 years, which is a significant improvement.

He also has 26 bald eagles living on the farm — the largest bald eagle population in Georgia — and their presence is a clear indication of the biological health of the farm.

A common misconception is that regenerative and organic farming cannot be done on a large-scale. Harris proves this isn’t true. In fact, while farming conventionally, he had about 700 heads of cattle on the farm.

Today, the land supports 100,000 individual animals of several species, and this is made possible because they support rather than compete with each other for limited resources.

Harris, like so many other free-range farmers, get great joy from his animals exhibiting their natural animal behaviors. In fact, this is part and parcel of animal welfare, and it makes for happier animals and healthier food.

A recent study published in the British Journal of Nutrition found clear differences between organic versus conventional milk and meat. Said to be the largest study of its kind, the researchers analyzed 196 and 67 studies on milk and meat respectively.

Studies such as these drive home the point that HOW food is raised does make a difference. You simply cannot cut corners during production without impacting the quality of the food and, by extension, human health. According to Chris Seal, professor of Food and Human Nutrition at Newcastle University:

“Omega-3s are linked to reductions in cardiovascular disease, improved neurological development and function and better immune function … But getting enough in our diet is difficult.

Our study suggests that switching to organic would go some way towards improving intakes of these important nutrients.”

How to Raise Free Range Animals on a Large Scale

I visited White Oak Pastures this past summer and got a tour of Harris’ operation. You can listen to the full interview here. In the video below, you’ll find two segments showing how he raises his chickens and pigs. It’s a far cry from the sad “prison cells” in which industrially farmed chickens and pigs spend their lives.

Harris has 14,000 birds that lay about 10,000 eggs a day, making White Oak Pastures the largest pastured egg operation in the U.S. The damaged eggs are recycled and fed to the pastured hogs who relish the treat; plus it enhances their diet.

Animals Are Essential for Land Regeneration

Ultimately, the symbiotic relationship formed by the many animals on the farm does more than protect each species from pests. It is a foundational part of regenerative land management. You’d be hard-pressed to gain the same benefits without them. At best, it would be far more labor intensive, as the animals perform many of the functions you’d otherwise have to do by hand or with machines.

The animals’ hooves break up hardened soils and trod their own feces and urine into the soil. To get the animals to cover and “treat” the entire 220 acres, Harris entices the cattle to move across the land by placing the hay at one end and the water at the other.

This helps maximize the impact of their hooves on the land, and helps distribute the waste (manure and urine) more evenly across the property. Now and then they also move the feed in order to encourage the animals to take a different path. In short, the idea is to imitate nature as much as possible, which includes the migration of wild herds across the land.

The pastures are all covered with a mix of perennial grasses. Perennials grow taproots that are nearly 8 feet long — much deeper than annuals. These long taproots help nourish the soil microbiome, which need the plant interaction. Shallow-rooted annuals are mixed in to increase diversity, but perennials are the long-term solution that allows the land to turn into a true savannah.

To adopt this kind of system you do need to understand how the various cycles work, such as the energy, carbon and water cycles. Otherwise you might fail to manage the process properly. For example, in the:

•Energy cycle, photosynthesis produces grass that feeds the cows. When sunlight hits bare earth, it’s of no use, so planting cover crops is key.

•Carbon cycle, the grass covering can be likened to photosynthesizing tissue that breathes in carbon dioxide, sequestering it in the ground, and breathes out oxygen, which is critical for animal and human life. By sequestering carbon in the soil where it’s needed, the plants help remove excess carbon dioxide from the air where it does harm.

•Water cycle, the quality of the soil makes a big difference. When the soil is hard and degraded, any rain that falls simply runs off and takes topsoil with it. When the soil quality is good, with high amounts of organic matter, it soaks up the water like a sponge. That not only helps retain water, but also the topsoil.

In short, healthier soils are part of the solution to reduce water consumption in agriculture. At present, agriculture uses up about 70 percent of the world’s fresh water, making conventional farming a significant contributor to looming water shortages. Regenerative agriculture can significantly reduce the world’s water needs.

These are complex cycles, and there are cycles within cycles that work in a symbiotic fashion. But once you get it right, you can rebuild soil quality at a very efficient rate. Harris, for example, is creating healthy topsoil hundreds if not thousands of times quicker than it would occur in nature simply by working with and optimizing these natural cycles.

How to Identify Healthier Foods

Your best bet for finding healthy food is to grow your own. If that’s not possible, then connect with a local farmer who raises crops and animals according to organic standards. In addition to organic produce, remember to choose organic, grass-fed/pasture-raised beef, poultry and dairy to avoid harmful contaminants like pesticides.

In the case of eggs, what you’re looking for is eggs from pastured, free-range hens. You can tell their superior quality by their dark, golden yellow yolks. The Cornucopia Institute’s egg report and organic egg scorecard ranks 136 egg producers according to 28 organic criteria.

Organic grass-fed and grass-finished meats have other nutritional benefits beyond being higher in healthy fats; they’re also free of antibiotics and other drugs used in concentrated animal feeding operations (CAFOs). With antibiotic-resistant disease being a major public health hazard, buying organic meats is an important consideration in more ways than one.

Unless labeled as grass-fed, virtually all the meat you buy in the grocery store is CAFO beef, and tests have revealed that nearly half of the meat sold in U.S. stores is contaminated with pathogenic bacteria — including antibiotic-resistant strains. Grass-fed beef is not associated with this high frequency of contamination, and the animals’ living conditions have everything to do with this improved safety.

If you live in the U.S., the following organizations can help you locate farm-fresh foods: