You Don’t Want 5G OR 4G Small Cells Installed Near Where People and Animals Spend Long Periods of Time. 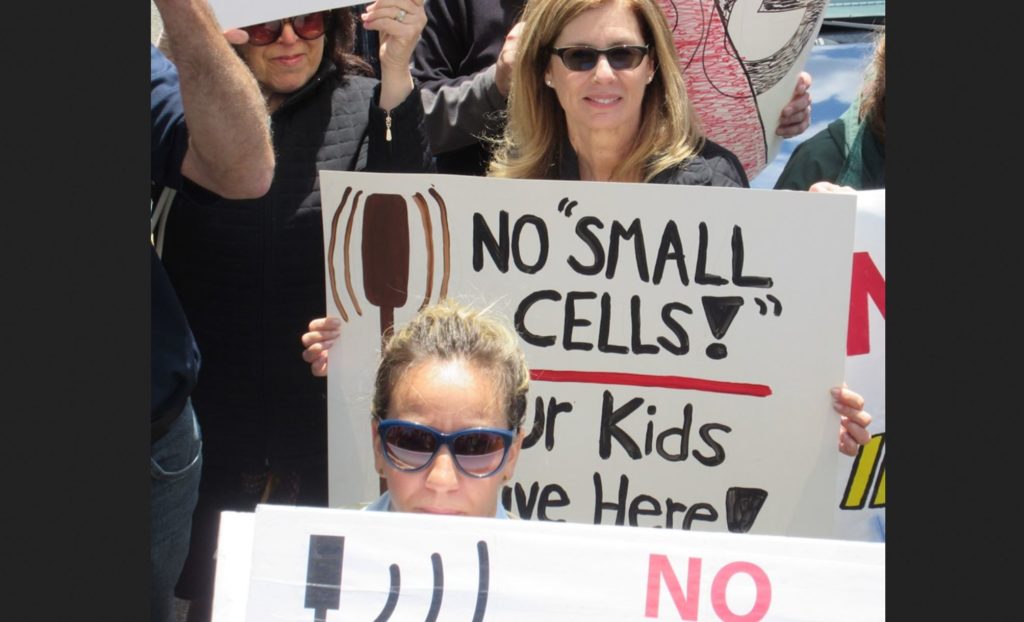 There is increasing opposition to 5G small cell technology installation for many good reasons.

This doesn’t mean that installing 4G small cells everywhere and boosting 4G levels is safer.  OMG NO!  There is research that proves 4G is biologically and environmentally harmful as well.  The American Academy of Pediatrics (AAP) and other health experts have warned that kids are more vulnerable than adults to ALL sources of cell phone and wireless radiation.  In fact, there is still no scientifically determined “safe” level of exposure for children or pregnant women.  Animals are affected by exposure too.  It seems that everything living is.

Thanks to Nicholas Gonzalez Foundation for posting an article written by Camilla Rees, MBA which provides more details about why we should be paying attention to all wireless antenna installation – not just 5G:

Is 5G the Problem? Or Is ‘Antenna Densification’?

Next generation telecommunications technology, called 5G, is in the news constantly these days. But there is plenty of confusion about what it involves, and whether it has even arrived.

Several of the ‘promises’ of this technology have been called into serious question, and much of what we hear about 5G wonders is considered hype. There is even an online promotion circulating suggesting 5G will ‘cure cancer’, when the radiation emitted by the coming 5G (and 4G) antennas densely placed throughout neighborhoods in very large numbers instead will greatly increase cancer and other serious diseases. Some Wall Street investment analysts, as well, are questioning whether the enormous costs to build out this new network, possibly hundreds of billions of dollars a year, can be financially justified.

At present, spectrum for 5G has not been finalized. The 5G network has not been built out. Limited 5G testing in lower frequency bands is going on in some cities. In some cases, results have been disappointing. The biggest risk at this time is from 4G antennasbeing rapidly placed on utility poles and other infrastructure near homes, that transmit 24/7. 4G and 5G antennas will work in tandem. 4G is needed for location identification of wireless devices for 5G’s ‘on demand’ transmissions, as well as for voice calls. 5G is for data, connecting things.  Phones enabled for 5G will still use 4G for voice. As explained in the Building Biology Institute’s new 5G course, 90% of cellular data is expected to transmit via 4G LTE for years to come.

Some believe the rush to hype 5G even before 5G technologies are fully developed or standardized is a trojan horse, that effectively brings 4G closer to homes without the difficulty and cost of obtaining permissions required for cell towers, while at the same time staking claim to muni ‘real estate’ for 5G later on if and when the 5G network is built out in a given location.

Describing the 4G risks here first is not to discount the importance of the additional new risks from 5G technologies that will become a reality when developed and deployed, including: Super-20 GHz exposures, with much higher and more biologically disruptive frequencies, in some cases going into the millimeter band; new signaling characteristics, like ‘beamforming’, that greatly concentrates radiation exposures into narrow, high intensity beams (that is also now being added to 4G); and industry’s aspiration for ‘network virtualization’, where antennas are in constant communication with each other, and optimized using artificial intelligence.

Professor Emeritus Martin Pall, PhD of Washington State University, in “How the Telecommunications 5G Strategy Will Use Artificial Intelligence to Replace Human Intelligence: The End of Mankind as We Know It”, says society “needs a debate on the consequences of 5G technology”. And “to determine whether the consequences of EMF exposures, including 5G exposures, should be viewed, as we have so far, as unintended consequences as opposed to a calculated part of the strategy to overturn human intelligence and replace it with AI.” These concerns must be seriously examined.

For now, the sheer number of radiating antennas being installed in close proximity to homes should be alarming to us all. So, too, should the fact that there exists far superior and much safer communications technology that is not being deployed (Fiber To The Premises, or FTTP), as described last year in National Institute for Science, Law and Public Policy’s “Re-Inventing Wires: The Future of Landlines and Networks”.

And, finally, of great concern is the fact that the U.S. government has known for well over a half a century that Radio Frequency Radiation emitted by wireless antennas and devices is linked to many diseases, including cancer, and including from their own research. Yet it has enabled the growth of the wireless industry to its present multi-trillion dollar size, and is now facilitating 4G/5G antenna densification, greatly escalating biological and health risks to humans, animals and Nature, while, importantly, eliminating local government control.

Please study up and learn everything you can about the risks of ‘4G/5G antenna densification’, support activists, and become involved yourself. Everyone is needed

Activist Post reports regularly about biological and environmental risks of all sources of Electromagnetic Radiation (aka “Electrosmog”). For more information visit our archives and following websites: