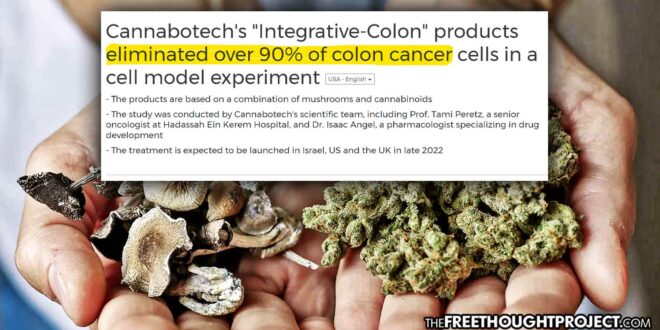 For years, when it comes to cannabis research, Israeli scientists have been pioneers. Thanks to the tyrannical schedule one rating in the United States, Israel is years ahead of American research, and the latest information out of Herzliya, Israel, is proof.

Though breast cancer is more diagnosed in the United States, colorectal cancer kills far more people, coming in as the second most deadly cancer in the world, just under lung cancer. For the last several years, scientists with Cannabotech, a biomedical company developing oncological products using cannabis, have been developing an “Integrative-Colon” product they say kills over 90% of colon cancer cells.

According to Cannabotech, the have concluded a study using not only cannabis, but a unique combination of cannabinoids and mushroom extracts, which they tested on various colon cancer subtypes, representing different molecular changes common in these colon cancer subtypes. Their results of the cell model study were astounding, showing that its “Integrative-Colon” products killed over 90% of colon cancer cells — and they attribute this to to the mushroom and cannabis combination.

Results showed that Cannabotech’s Integrative-Colon products composition is significantly more effective than each cannabinoid individually, and there is a strong synergy between the active ingredients. These results reinforce Cannabotech’s claim that to achieve effective treatment in the oncology field, it is necessary to build a defined, accurate and science-based formula, which cannot be obtained in any cannabis strain that exists in nature.

Given the fact that the survival rate for colorectal cancer is just 65%, the idea that an easily grown plant and fungus could be used to save hundreds of thousands of lives, is inspiring to say the least.

Humans share more DNA with mushrooms than we do with plants, a lot more. Animals and fungi share a common ancestor and branched away from plants sometime around 1.1 billion years ago. Only later did animals and fungi separate on the genealogical tree of life, making fungi more closely related to humans than plants. For example, when mushrooms are exposed to sunlight they can produce vitamin D — just like humans.

The mushrooms extracts used in Cannabotech’s new product contain an enriched and high concentration of an active substance called PSK, extracted from the Trametes mushroom. The anti-cancer properties of this particular extract have been known and have already been approved as an oncology treatment in Japan, Taiwan and South Korea — all of whom havesignificantly lower rates of cancer than the United States.

“This is a significant milestone in Cannabotech’s growth to becoming a leader in integrative oncology medicine,” Cannabotech CEO Elhanan Shaked said in a recent press release about the study, noting that they are not trying to replace current treatments, only supplement them.

“The integrative products developed by Cannabotech are intended for use in combination with chemotherapy treatment to reduce its side effects. Cannabotech’s solutions will be launched in Israel and the US towards the second half of 2022, while the Company’s goal is to define a new standard for the medical cannabis industry,” she said.

“Colon cancer is one of the most common tumors today, with a significant proportion of patients currently treated with integrative therapies, in combination with traditional methods, including the administration of medical cannabis. Cannabotech’s Integrative products are unique in that they are designed to standards similar to those of the pharmaceutical industry and incorporate many active ingredients. The Company’s products have demonstrated impressive and very promising efficacy in colon culture cells tested in the laboratory. Based on these experiments, there is room to perform animal studies and, in the future, to examine the possibility of incorporating these products in colorectal cancer patients,” Prof. Tami Peretz, the firm’s Senior Oncologist noted.

According to the release, the company will being examining multiple combinations of its product with standard chemotherapies during the next stages of research which are coming to the US and the UK by the end of the year.

Perhaps this will be the final nail in the coffin that is the idiocy associated with cannabis prohibition.