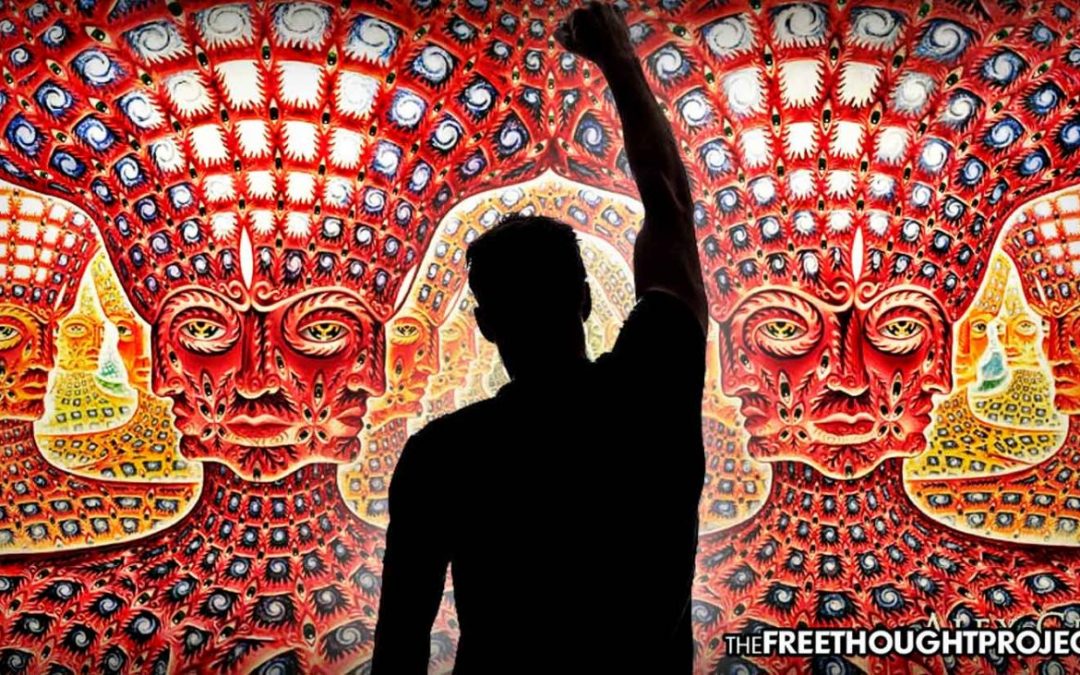 Seven years ago, Colorado citizens—tired of the war on drugs and wise to the near-limitless benefits of cannabis—made US history by voting to legalize recreational marijuana. Then, last year, this state once again placed themselves on the right side of history as they voted to decriminalize magic mushrooms. But this was just the beginning and their momentum is spreading—faster and stronger, toward decriminalizing all plant-based psychedelics.

Now, a major city in California is following suit, but not just with psilocybin—Santa Cruz just passed a decriminalization measure for other psychedelics like mescaline cacti, ayahuasca and ibogaine.

The City Council voted unanimously to decriminalize the adult use and possession of magic mushrooms and other entheogenic, or psychoactive, plants and fungi. The measure passed with overwhelming support.

The measure—which was originally sponsored by then-Vice Mayor Justin Cummings (D), who’s since become mayor—says the city shouldn’t expend “resources in the investigation and arrest of persons twenty-one (21) years of age and older solely for the personal use and personal possession of Entheogenic Plants and Fungi” such as psilocybin, ayahuasca and ibogaine.

It further stipulates that possession and use of psychedelics by adults “should be considered among the lowest law enforcement priorities for the City of Santa Cruz.”

“Plants and fungi with psychedelic properties have been used for thousands of years by indigenous communities for spiritual and medical practices and many are considered illegal in our country,” Cummings told Marijuana Moment in an email. “As we begin to better understand the health benefits of these plants and fungi, we need to not treat the people who use and research these plants and fungi as criminals, and lower barriers for research, clinical treatment, and personal.”

“Santa Cruz has a number of organizations that conduct research on use of psychedelics to improve mental health and we as a community want to support these efforts,” he added.

Use of the plants “saved my life,” said one man who described himself as a former heroin addict. “I don’t how to describe it other than miraculous.”

“Psychedelic-assisted therapy saved my life,” Dylan Jouras said. “It’s important that people know there is an effective way to get better from addiction and deep mental health issues.”

“These eight months we’ve been working on the resolution, I’ve met so many people whose lives were saved by entheogenic plants and fungi,” Julian Hodge, a founder of Decriminalize Santa Cruz and a member of Students for Sensible Drug Policy, told Marijuana Moment. “The Santa Cruz City Council took a great step to help those people today. I am incredibly proud to be part of this movement, and can’t wait to see the change we continue to make in the future.”

To be clear, the recent measure does not mean that mushrooms and other plants are now legal, it simply means that cops can’t make it a priority to go after folks for them and it won’t land people in jail for possession. While legalization would be the perfect result, this is most certainly a step in the right direction.

“It’s the plants that are going to bring us back to sanity. We’ve got to listen to their message and we’ve got to live reciprocally with nature and restore the natural order,” Susana Eager Valadez, director of the Huichol Center for Cultural Survival and Traditional Arts said after Oakland passed a similar measure last year.

Now, cops can try to focus on real crimes instead of kidnapping and caging people who are trying to heal themselves with a plant.

Supporters hope the decision will begin a nationwide discussion about decriminalizing plant-based drugs.

As TFTP has reported in the past, psilocybin-containing mushrooms are an enemy to the establishment who has every reason in the world to want to keep them as illegal as possible. The same goes for ayahuasca and other powerful mind-opening substances.

The United States Supreme Court has unanimously ruled in favor of the legal religious use of ayahuasca by the União do Vegetal, and the U.S. Court of Appeals for the Ninth Circuit has affirmed the Santo Daime Church’s freedom to use ayahuasca for religious purposes. However, ayahuasca’s principally active ingredient, DMT, remains a Schedule I controlled substance, carrying a steep prison sentence.

DMT appears in trace amounts in human blood and urine, suggesting it must be produced within the body, which means the DEA literally classifies our own bodies as have no medical purpose.

Because the US government is so tyrannically far behind the times, many people have been forced to travel outside of the country to meet with Shamans in the Amazon who are skilled and knowledgeable about the substance.

One industry in particular, Big Pharma, stands to lose billions if measures like this one began to spread to other areas as mushrooms and other hallucinogens have been clinically tested to treat a wide range of problems, including depression.

One in ten men in the US currently takes an antidepressant while 16.5 percent of women use them as well. If people can treat their depression with something that you can grow in your own home or a plant medicine from a shaman verses taking pills with side effects like homicidal ideation, the pharmaceutical industry would lose big time.

Indeed, there are mounds of evidence and studies showing the positive benefits of magic mushrooms, ayahuasca, and ibogaine.

As TFTP reported, a study, published in the scientific journal Neuropharmacology, found that clinically depressed people had increased neural responses to fearful faces one day after a psilocybin-assisted therapy session, which positively predicted positive clinical outcomes.

This is almost the exact opposite of how standard anti-depressants operate, as SSRI’s typically work by creating an “emotional blunting.”

“[T]his is unlike SSRI antidepressants which are criticized for creating in many people a general emotional blunting,” noted Roseman.

“I believe that psychedelics hold a potential to cure deep psychological wounds, and I believe that by investigating their neuropsychopharmacological mechanism, we can learn to understand this potential,” explained Roseman.

The government also stands to lose if more measures like this take hold in other cities too.

As TFTP previously reported, mushrooms and psychedelics used to be widely accepted as a treatment for many ailments until government moved in to stop the expansion of human consciousness.

As MAPS points out, although first-hand accounts indicate that ibogaine is unlikely to be popular as a recreational drug, ibogaine remains classified as a Schedule I drug in the United States (it is also scheduled in Belgium and Switzerland). Yet despite its classification as a drug with a “high potential for abuse” and “no currently accepted medical use,” people who struggle with substance abuse continue to seek out international clinics or underground providers to receive ibogaine treatment.

In the 1940s, Western medicine began realizing the potential for psychedelics to treat addiction and psychiatric disorders. Tens of thousands of people were treated effectively, and psychedelic drugs were on the fast track to becoming mainstream medicine. But the beast of oppression reared its ugly head.

In 1967 and 1970, the UK and US governments cast all psychedelic substances into the pit of prohibition. People were waking up to the fact that governments intended to keep the world in a state of war, and that governments were working to keep the populace sedated under a cloak of consumerism. The collective mind expansion of that era came to a screeching halt under the boot and truncheon.

As John Vibes pointed out last January, a study actually confirmed the fear of authoritarians and showed they have every reason to oppose legal mushrooms. According to the study from the Psychedelic Research Group at Imperial College London, published in the journal Psychopharmacology, psychedelic mushrooms tend to make people more resistant to authority. They also found the psychedelic experience induced by these mushrooms also cause people to be more connected with nature.

“Our findings tentatively raise the possibility that given in this way, psilocybin may produce sustained changes in outlook and political perspective, here in the direction of increased nature relatedness and decreased authoritarianism,” researchers Taylor Lyons and Robin L. Carhart-Harris write in the study.

Now, as people share information globally, instantaneously, on a scale unstoppable by the state, we are resuming the advancement of medical research on psychedelic substances. Scientists are challenging the irrational classification of psychedelics as “class A” (UK) or “schedule 1” (US) substances, characterized as having no medical use and high potential for addiction. And, the recent push in Colorado is evidence of this.

While the stigma associated with mushrooms and other psychedelics has been perpetuated by those who wish to keep them illegal—to keep society in a constant state of obedient mediocrity—in reality, they are extremely safe.

In fact, a major study last year declared magic mushrooms to be the safest recreational drug.

Of an astonishing 120,000 participants from 50 nations, researchers for the Global Drug Survey found the percentage of those seeking emergency treatment for ingesting psilocybin-containing hallucinogenic mushrooms to comprise just 0.2 percent per 10,000 individuals.

Rates of hospitalization for MDMA, alcohol, LSD, and cocaine were an astounding five times higher.

“Magic mushrooms are one of the safest drugs in the world,” Global Drug Survey founder and consultant addiction psychiatrist, Adam Winstock, told the Guardian, noting the biggest risk users face is misidentification — ingesting the wrong mushroom — not from the psychedelic fungus, itself.

After 40 years, it appears that another brick in the wall of prohibition is beginning to crumble in the face of science and logic. There may be hope for humanity after all.

Matt Agorist is an honorably discharged veteran of the USMC and former intelligence operator directly tasked by the NSA. This prior experience gives him unique insight into the world of government corruption and the American police state. Agorist has been an independent journalist for over a decade and has been featured on mainstream networks around the world. Agorist is also the Editor at Large at the Free Thought Project, where this first appeared. Follow @MattAgorist on Twitter, Steemit, and now on Minds.