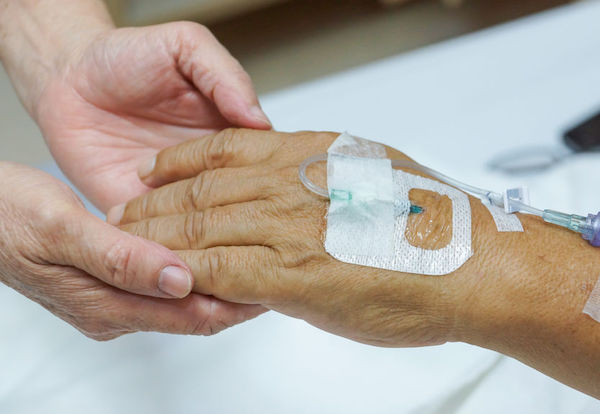 Chemotherapy often involves the injection of highly cytotoxic agents. As a result, veins can undergo great damage, inflammation, and pain. But nature has one remedy — sesame seed oil — that has been clinically proven to prevent and treat the condition

One of the most common and painful side effects of intravenously administered chemotherapy is phlebitis (CIP), or inflammation of veins exposed to the these cytoxic agents. Estimates range, but it is possible that up to 70% of patients receiving conventional chemotherapy experience phlebitis of some degree,1 which not only causes great suffering but can also lead to thrombophlebitis, where the inflammation of the vein causes a blood clot to form and block one or more veins (embolism).

Remarkably, several studies have been published showing that topical sesame oil is effective at preventing CIP as well as for reducing pain severity.

The first clinical study, published in 2012, found that among 60 patients with colon or rectum cancer divided either into an intervention group or control, the group who received 10 drops of sesame oil applied twice daily for 14 days externally experience phlebitis only 10% of the time, versus 80% of the time in the control group. The researches concluded that,

external use of SO is effective, safe and well-tolerated for prophylaxis from Ph [phlebitis]. Therefore, it can be suggested as a selected prevention method for reducing the complication.”

The second study, published in 2019, also involved 60 colorectal cancer patients, but these were already diagnosed with chemotherapy-induced phlebitis (CIP). They were randomized into two groups. Patients in the control group received, twice a day for seven consecutive days, a 5-min massage. Patients in the intervention group were given the same massage, but with 10 drops of sesame oil within the 10 cm radius of the affected site. The pain severity was evaluated by the visual analog scale on the first, third, fifth, and seventh days of the intervention. The results were reported as follows:

Application of massage with sesame oil as a complementary method is effective in reducing the pain severity of patients with CIP.”

In short, the two clinical studies show that sesame seed oil can be used to both prevent and treat CIP safely and effectively.

To learn more about the broad range of health benefits and applications associated with Sesame Seed Oil use our database on the topic.

1 Rahmani R. Effect of Topical TNG to Prevent From Phlebitis through Using Venous Catheter on Patients Who Were Under Chemotherapy Treatment [Dissertation] Iran: Bagiyatallah University of Medical Sciences; 2008. [Google Scholar]