Shocker: The Dangers of Ultrasound 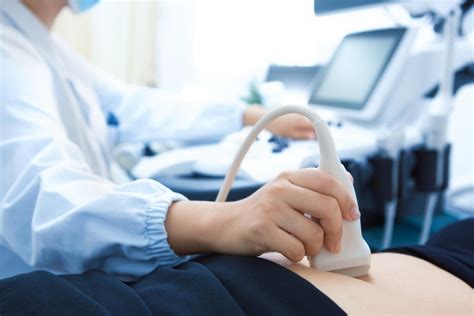 Shocker: The Dangers of Ultrasound

A book by the great researcher Jim West – Every time Jim West (also here) releases a new finding, it is a revelation.

Some years ago, I wrote this about Jim:

“I always find it riveting to come across an independent investigator who is breaking new ground, against all odds. Jim West is such a person. His meticulous analysis of West Nile Disease [in fact caused by toxic pollution, not a virus] has turned the establishment on its head. We should all thank him for his work. If I were the king of Pulitzers, I would give him a dozen. He is what truly deep reporting is all about. In a sane world, his revelations would bring about the firing of scores of so-called medical journalists and disease researchers, and he would be sitting at the top of the heap — not in order to exercise arbitrary power, but simply because he has trumped the lazy and the incompetent and the lying professionals who are supposed to tell us what is going on.”

There are many other things I could say in praise of Jim’s work. Instead, I’ll present an excerpt from the notice of his new book. It’s a book you should have and read: “50 Human Studies, in Utero, Conducted in Modern China, Indicate Extreme Risk for Prenatal Ultrasound: A New Bibliography”.

Jim West has released his unprecedented Bibliography of critical ultrasound research, as a book, available at Amazon.com.

Ultrasound is a highly controversial topic. It can now be said, without hyperbole, that an understanding of its mysteries are essential to the well-being of the individual and the human species.

The word “ultrasound” commonly refers to diagnostic ultrasound, an acoustic technology utilized to view images of the fetus in real time, its position within the mother, and to view the mother’s reproductive organs. It is an economic boon to medical practitioners who advocate its routine use.

Diagnostic ultrasound is widely declared to be “harmless” to the fetus (*), despite some mothers describing via online forums such as The Thinking Mother’s Revolution, vaginal bleeding and pain, and others describing every detail related to ultrasound and pharmaceutical or vaccine associated damage to their child. Ultrasound is now being applied to most of the entire world population during its fetal stage. The health implications are vast in terms of physical and psychological health for the individual and society. 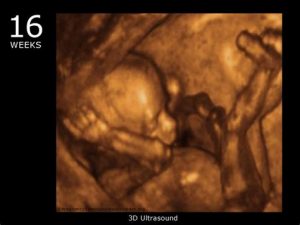 Ultrasound appears to have set the human specie on a tragic path, due to the subtle and not-so-subtle effects of ultrasound exposure. Critics argue, for example, that the exponential rise in autism incidence is a product of fetal exposure to ultrasound. If they are correct, then it may take many generations to recover from this misguided application of medical technology.

Ultrasound imaging technology for diagnostic examinations evolved from a type of echo-imaging, originally developed as SONAR, a technology invented to detect submarines by pinging sound waves off the submarine hull and electronically measuring the echo, the duration required to reflect ultrasound from the submarine hull back to the source of the ultrasound.

In the medical field, ultrasound has been in use for many decades, employed to generate “echo images” of the fetus. Ultrasound is not ordinary sound, however.

It is a highly unusual form of sound when used for the purpose of prenatal or obstetric diagnostic examinations. Humans ordinarily are capable of hearing sounds in the range of 20 to 20,000 cycles per second (hertz). Ultrasound for fetal examination carries a frequency in the range of 3 to 9 megahertz, millions of cycles per second, above the EMF frequencies of the AM radio band.

Ultrasound imaging technology has supplanted, to an extent, the earlier imaging technology, X-rays. That older technology is now known publicly to be hazardous, to be carcinogenic, however, it took decades for this knowledge to become public. The history of medical X-ray imaging may be a parallel for ultrasound history. X-rays were previously known to be a risk though continuously advocated as harmless by the medical profession. 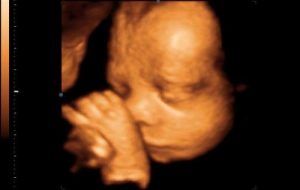 Ultrasound is known to have the potential to produce harmful biological effects in the fetus. This has been found via animal and cell studies. However, these hazards have supposedly not been confirmed by human studies. Funding for ultrasound studies has virtually disappeared since the late 1980s. despite the FDA raising ultrasound intensity limits in 1991.

“Although laboratory studies have shown that diagnostic levels of ultrasound can produce physical effects in tissue, there is no evidence from human studies of a causal relationship between diagnostic ultrasound exposure during pregnancy and adverse biological effects to the fetus.” — Sarah L. Cibull, BS, Gerald R. Harris, PhD, and Diane M. Nell, PhD. “Trends in Diagnostic Ultrasound Acoustic Output From Data Reported to the US Food and Drug Administration for Device Indications That Include Fetal Applications.” J Ultrasound Med 32 (2013): 1921–32.

Unknown to Western scientists, the hazards of ultrasound have been confirmed in China since the late 1980s, where thousands of women, volunteering for abortion, thousands of maternal-fetal pairs, were exposed to carefully controlled diagnostic ultrasound and the abortive matter then analyzed via laboratory techniques.

From these human studies, Professor Ruo Feng, of Nanjing University, published guidelines in 2000:

An unprecedented Bibliography of Chinese ultrasound studies by Jim West, is now available, published as a book with commentary, illustrative graphs and tables. This is a presentation of arcana, i.e., vitally important but unknown scientific studies. The title is, “50 Human Studies Indicate Extreme Risk for Prenatal Ultrasound: A New Bibliography”.

This is the most important bibliography and commentary ever compiled for the field of ultrasound criticism, though for legal reasons, its conclusions and implications should be suspended, pending trustworthy authoritative review.

The book presents human studies conducted in modern China, which examine the results of in utero fetal exposure to diagnostic ultrasound. They far exceed Western science in terms of technical sophistication, era relevancy, volume of work, and number of subjects. They bring empirical evidence for ultrasound hazards.

These studies involve the exposure of over 2,700 maternal-fetal pairs to diagnostic ultrasound. The number of scientists involved are approximately 100. Pregnant women were carefully selected and then exposed to controlled ultrasound sessions. Ethical concerns were carefully observed. Abortive matter was examined via state-of-the-art technology, e.g., electron microscopy, flow cytometry, and various biochemical analysis (immuno- and histo-). The results were compared against the results of sham-exposed pregnant women (exposed at zero intensity).

Western scientists had previously found hazards via animal and cell studies, however, their findings were deemed inconclusive because they were not confirmed by human studies.

Human studies can be of two types: 1) epidemiological studies, i.e., population reviews, and, 2) in utero exposure studies, where abortive matter is evaluated in a laboratory following diagnostic ultrasound exposure to the fetus in the mother.

Western scientists have conducted only a few epidemiological studies, and virtually no human exposure studies. Epidemiological studies are complex, have many statistical variables, and are thus highly vulnerable to biased interpretation. They are often published as moot or statistically insignificant, despite finding patterns of ultrasound damage.

Due to abortion ethics, in utero exposure studies were virtually banned in the Western realm. Within the entire world population, the medical industry has not reported one case of human damage. Thereby, without certain proof, authorities continued on with the assumption that humans were resistant to ultrasound toxicity.

The Chinese studies were unknown in the Western realm and little known even in the East. These represent 23 years of critical research, from 1988 to 2011. Unfortunately, these studies were overwhelmed by a tremendous flood of studies that promote medical and therapeutic innovations for ultrasound.

The Chinese studies have remained disconnected from the Western realm, beyond discussion outside of China, being the casualty of cultural and language gaps, and lacking a benefit for industry.

As of 2013, Jim West began his research out of frustration. He had experienced the impossibilities of discussion whenever the topic of ultrasound hazards was attempted, even with his nearest friends. He always brought eloquent documentation, though to no avail. He was met with reflexive blocks. These were passive and aggressive, apparently out of fear of the birth process and a belief that ultrasound would provide assurance.

Realizing that people require authoritative statements, Jim searched for a simple statement of empirical evidence that could not be denied.

After several months of intensive research within the Western scientific realm, he, like others, realized there was little definitive evidence that would satisfy the strict industrial requirements, that is, there were few human studies of any kind. Human studies had been deemed by authorities to be essential for confirmation of hazards. He was aware of the hundreds of animal and cell studies, but they were known to be ill-designed and inconclusive. Excellent critical studies were contradicted by competing studies that declared ultrasound safe. Jim did find a few very strong animal studies that had not been contradicted, but they were ignored or rejected by mere authoritative assertion.

As a working research theory, Jim hypothesized that the ideal modern ultrasound study would utilize a very sensitive type of chromatography, called “electrophoresis”, to detect cell damage caused by ultrasound exposure. Electrophoresis is a simple technology, the moving of electric current through a sample of biological matter in order to draw its various components through a gel-covered plate. The various components separate out through the gel, creating visual patterns for analysis. Electrophoresis is used to analyze biological complexes such as nucleic acid (DNA or RNA). It is employed, for example, in DNA fingerprinting, to identify people, their DNA, to detect their prior presence at a location, by examining samples of blood, hair, or tissue and matching those analytical results with suspects who had been similarly analyzed.

Jim’s focus on electrophoresis lead to a Chinese electrophoresis study of ultrasound causation for DNA fragmentation in abortive matter. The study is published in pristine scientific format and published in English. The study’s references lead to an expanding tree of studies located in Chinese online databases such as CNKI. Though these studies are primarily in Chinese language, many contained an Abstract, translated into English manually or by machine software.

Many studies were reviewed by professor Ruo Feng, of the Acoustic Institute at Nanjing University. He determined guidelines from the studies, stipulating that routine ultrasound be avoided. Only if there were exceptional medical indications should ultrasound be allowed, and at minimum intensity. Sessions should be very brief, no more than 3 minutes, 5 minutes at most. Multiple sessions should be avoided because hazards are cumulative. Sensitive organs were found damaged at 1 minute exposure.

The Chinese studies echo and confirm the earlier, ignored and rejected, 1984 “Consensus Statement”, written and published by the National Institute of Health and signed by the preeminent American scientists of that era. (See: NIH, “Diagnostic Ultrasound Imaging in Pregnancy: NIH Consensus Development Conference Statement” (February 6, 1984))

Currently, the medical industry loudly claims that ultrasound is “harmless” while it advocates routine ultrasound for pregnant women and even prepubescent girls. It is not uncommon for ultrasound sessions to use intensities and duration far above those used in the Chinese studies.

Jim has done the math and graphically illustrates the evidence, for example, this comparison of Western critical studies and Chinese studies in terms of duration to damage, when subjected to the average device intensity for a common diagnostic ultrasound session in B-mode. These durations are approximated extrapolations.

Jim’s ultrasound causation model is fully compatible with the vaccine model, because it includes the concept of toxic synergy, and ultrasound is an effective synergist. Ultrasound is theoretically capable of initiating fetal vulnerabilities to subsequent toxic exposure. Thus the risk of subsequent exposure to vaccines, birth drugs, antibiotics and other environmental stressors would be raised by prenatal ultrasound, not in addition, but as a multiplier. (Emphasis added)