Since Feeding the Homeless Is Illegal, Activists Carry AR-15s to Give Out Food, Supplies 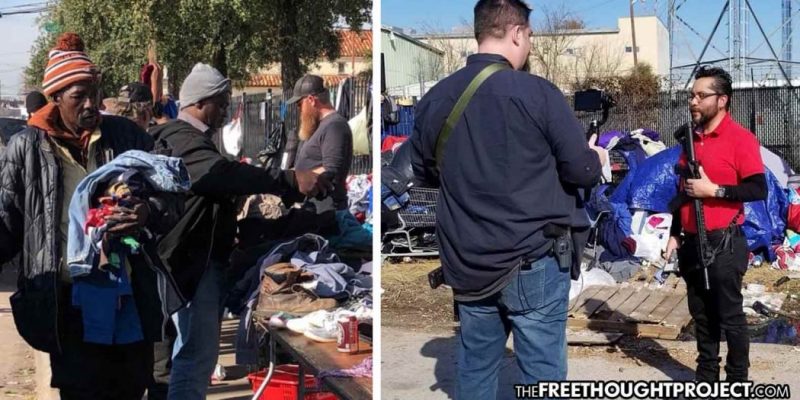 Since Feeding the Homeless Is Illegal, Activists Carry AR-15s to Give Out Food, Supplies

Dallas, TX — Feeding and clothing the homeless in the land of the free has now become a revolutionary act. Luckily, however, there are still good people willing to carry that act out.

In December 2014, the Dallas city council enacted Ordinance No. 29595, which makes it illegal to serve food to the homeless without jumping through a statist myriad of bureaucratic hoops, including a fee, training classes, and written notices.

One should not need to file multiple forms and pay a fee to obtain a permit to give food to those in need who are willingly ready to accept it. The folks at Don’t Comply know this.

Over the weekend, the aptly named organization, Don’t Comply, and dozens of volunteers from children to adults alike took to the streets of Dallas to hand out food, sleeping bags, clothing, and tents to the area’s less fortunate.

As TFTP has reported on numerous occasions, often times, police will swoop in and shut downthose who would dare defy the authority of the state and conduct charity without a permit. However, most organizations aren’t like Don’t Comply.

As they took to the streets this weekend, many of the members of the organization open-carried their weapons. This was done—not out of an act of intimidation—but merely to assert rights as well as protect them.

The resultant heavily armed group of do-gooders effectively staved off any attempts by police to shut down the charitable efforts.

We spoke to one of the participants, who also happens to be a good friend of mine, Luis Fernando Mises who explained why the group carries weapons.

“When the system makes it illegal to feed people without a license, the unintended consequences are that we become criminals when we feed homeless people in the street,” he said. “What we do then, is get on an equal playing field with this system and we demonstrate that we can still help people. And, we do it peacefully…with guns.”

Success, and just like that, good people disobeying bad laws, while being well armed, had a positive effect on the world. Those in need were given supplies that may ultimately save their lives over the harsh winter and all of it was done in spite of “the law.”

Below is the most amazing video taken by our friends at New2Share showing the results of good people breaking bad laws.

Armed activists with the group "Don't Comply" held an unpermitted event Saturday in Dallas, TX where they gave food, winter clothes, and blankets to the homeless. The group carried guns as a deterrent to police interupting their event. "It is illegal to feed homeless people if you don't jump through all the hoops and licenses," said organizer Murdoch Pizgatti. "So we come down here well armed because we're not going to let anyone stop us."Footage by N2S Contributor Dean Ryan

Posted by News2Share on Saturday, December 7, 2019

As TFTP has reported at length, the war on the homeless, as well as the war on those who want to help them, is relentless. Previously, during Thanksgiving, a group giving out food in Atlanta was shut down by police because they failed to pay the state for permission to give food to voluntary recipients.

TFTP also reported on a law in Kansas—which appears to be a trend across the country—that allows police to fine and even arrest people not for feeding the homeless but for simply giving them money.

Sadly, the state’s endless desire to generate revenue and oppress rights has led to a system which requires permits for just about every activity not just feeding the homeless. This permitting process acts as a stranglehold on those trying to make a living—keeping them in a perpetual state of poverty.

In 2017, the Alameda County Sheriff’s department posted a photo of a deputy arresting a man for selling fruits and vegetables on the roadside and attempted to justify the arrest. When people read the department’s justification, they lashed out — peacefully — to let them know what they were doing is wrong.

In June, a 38-year-old homeless man was attempting to earn some honest money by providing a much-desired service of bicycle repair to the residents of Kennewick, Washington when he was threatened with extortion and arrest by the local police department, which effectively ended his enterprise.

After the Kennewick Police Department threatened the homeless man and prevented him from making a living, they took to Facebook to shamelessly brag about it. The man was told that while it was illegal for him to fix bicycles, he could certainly beg for money.