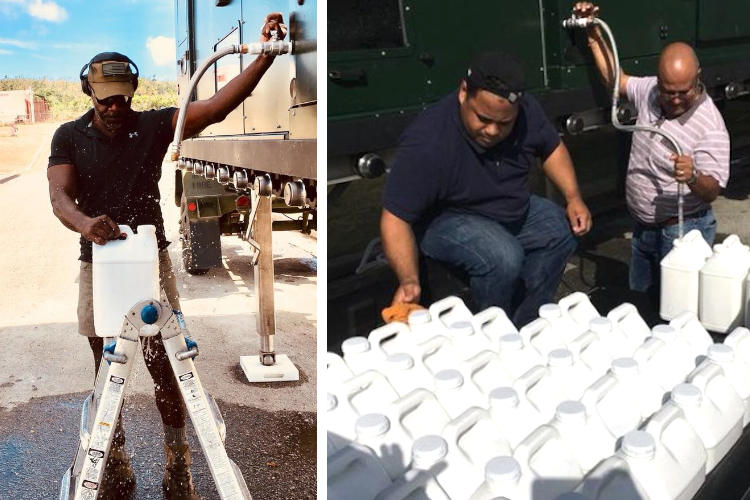 Profoundly useful inventions having to do with the use or production of water are a common topic that catches the eye. Reports of water-fuelled devices are often interesting, as are devices capable of cleaning water. However, it’s not often that we hear about devices capable of producing water. Recently, it was reported that a Texas man created a machine that is capable of extracting water from nothing more than the moisture in the air.

Moses West, 59, a retired Army officer pioneered something known as an atmospheric water generator (AWG) in 2015. It cools humid air until the vapor in it condenses into a liquid. Once the proper amount of condensation has been collected, the device filters it, leaving behind clean, perfectly drinkable water.

It looks like some type of fixture that might contain electrical equipment, or perhaps an industrial air conditioning system outside a large building. A metal, rectangular device approximately twice the height of an average person standing on metal stilts, the device is the size of a 20-foot shipping container, made to produce up to 3,500 gallons of water per day with a storage capacity of 528 gallons. In the aftermath of Hurricane Maria, which devastated Puerto Rico in 2017, Moses brought his machine to the island of Vieques, providing clean drinking water to people who couldn’t need it more. He has also brought the devices to Flint, Michigan and the Bahamas, where his ingenuity has offered the most creative help ever given to communities in need of fresh water.

In an interview with Michelle London of Spectrum News 1, he explained:

“Everybody knows we’re running out of water. All the water we need, it exists right here in the air.”

For those wondering how much energy the machine consumes, he clarified:

As of September 2019, 12 of West’s AWG’s have been produced, with the intention of creating many more to serve communities in need around the world. Moses has spent a good deal of time on the ground with people who are fortunate enough to have access to the AWG. He takes the time to talk with hundreds of individuals who regularly to stock up on fresh water using his machine.

“I need to engage with the people here, and I need to show what this petition does, and they need to understand that it is their machine, and I am here for them,” West continued, placing special emphasis on his being there for the people and not for profit or ulterior motives. Fire department employees, public service agencies, hotel owners, restaurant workers, and average people all benefit from the AWG’s, although it was initially reported that some exhibited skepticism of the machines. “It’s one of those things where there’s a lot of trust involved in providing people water,” he said.

In Flint, Michigan, where official corruption let to one of the worst local water crises this nation has ever seen, Moses’ device finds another welcoming home. His efforts mirror the work of groups such as New Era Detroit, who supplied residents in lead-contaminated Flint with clean water in 2016, by trucking in water to residents in need.

Hopefully more resources will be accessible to Moses West to further his noble and ingenious plans. A selfless and admirable spirit surrounds the effort, and all signs point to further success helping those in need.

About the Author: Cassius Kamarampi is a writer, documentary film producer, and clothing line owner from North Highlands, Sacramento, California.

This article (Texas Inventor Brings Atmospheric Water Generators to Flint, Michigan and Other Communities in Need) originally created and published by Waking Times and is published here under a Creative Commonslicense with attribution to Alex Pietrowski and WakingTimes.com.