The Age of Revealing by Michael Tsarion 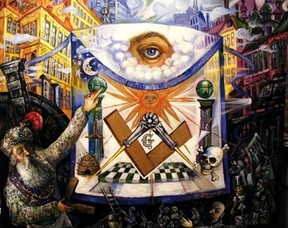 …the final goal of world revolution is not Socialism or even Communism, it is not a change in the existing economic system, it is not the destruction of civilization in a material sense; the revolution desired by the leaders is a moral and spiritual revolution, an anarchy of ideas by which all standards set up throughout nineteen centuries shall be reversed – Nesta Webster (Secret Societies and Subversive Movements, 1921)

Benjamin Disraeli, the first Jewish Prime Minister of Victorian Britain, wrote in his novel Coningsby: “The world is run by very different personages from what is imagined by those who are not behind the scenes.” Disraeli was obviously aware that our world is controlled by powerful secret societies and fraternal orders whose agendas and goals have little to do with our best interests. Although these orders do not necessarily conceal their identities, they do endeavor to conceal what goes on behind the doors of their various lodges and establishments. Elite members of the Alpha Lodges of Freemasonry do not wish to have information about their strange practices, rites and agendas publicly disclosed. They manufacture many strategies and devices to ensure secrecy. As one Masonic author reveals:

Freemasonry is labyrinthine. It is full of puzzles, conundrums, misspellings, corruptions, cryptic clues, and simple salutes, childish codes, contrivances, circular paths, roads that sometimes lead nowhere, walls appearing to be ten feet thick yet giving way easily to the lightest touch in the right spot, riddles to be solved, numerous passwords, an allegorical, highly symbolical, double-entendre storyline worthy of the best latter-day spy writers, protected by secret signs and symbols and a myriad of enigmas to be confronted…In the labyrinth that is Freemasonry there is a center where rests its holy grail. Many have tried to find it only to reach dead ends – Leon Davin (The Ritual: The Greatest Story Never Told)

The Blue Degrees are but the outer court…of the temple. Part of the symbols are displayed there to the initiate, but he is intentionally misled by false interpretation. It is not intended that he shall understand them, but it is intended that he shall imagine that he understands them…The true explanation is reserved for the Adepts, the Princes of Masonry (those of the 32nd and 33rd degrees) – Albert Pike

These good folk swell our numbers and fill our money-box. Set yourselves to work; these gentlemen must be made to nibble at the bait…But this sort of people must always be made to believe that the grade they have reached is the last – Adam Weishaupt

Disraeli was not the only man to remark on the Machiavellian agendas of those who work to change the course of humanity’s fate. In her voluminous but rambling writings, occultist and Fabian Alice A. Bailey explained the essentials:

Behind the division of humanity stand those Enlightened Ones whose right and privilege it is to watch over human evolution and to guide the destinies of men…This they do through the implanting of ideas in the minds of the world thinkers, so that these ideas in due time receive recognition and eventually become controlling factors in human life. They train the members of the New Group of World Servers in the task of changing these ideas into ideals. These in turn become the desired objectives of the thinkers and are then taught to the powerful middle class and worked up into world forms of governments or religion, thus forming the basis of the new world order

Naturally, the power-elites and their minions, who apparently believe the world to be their personal play-pen, have a great deal to lose should the underclasses learn about the psychic and social control that operates all around them, hidden in plain sight. However, the task of revealers is made considerably more difficult due to “consensus trance” and knee-jerk fear that inhibits a colonized mind. Servants of Truth know from experience how few friends are won when and if they endeavor to expose the dirty big secrets of religion’s upper echelon. Nevertheless, a Servant of Truth is not permanently daunted by controversy or resistance. He is aware that one is much more likely to cut themselves with a blunt knife than a sharp one. He is aware that the cost of ignorance is ultimately far greater than the price paid for knowledge. He knows that freedom is never free and that silence is most definitely consent. He comes to realize that on the great board game of life, if he fatally chooses not to occupy the white squares of knowledge, he will be manipulated by those who will.

The only good is knowledge and the only evil ignorance – Socrates