The Disinformation of Misinformed Informers 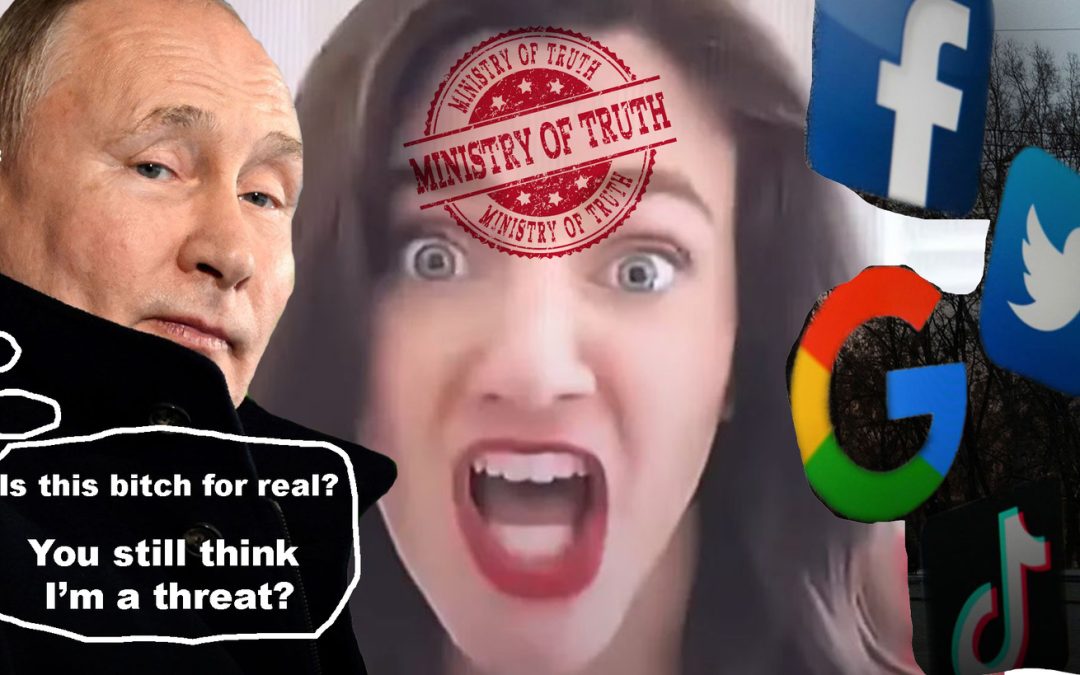 The Disinformation of Misinformed Informers

This post has been fact checked by official fact checkers who are experts in disinformation.

Trusted sources are saying that Intel officials are worried that sources confirm that unapproved disinformation from people interested in honest information is the greatest threat to democracy. Alongside white supremacy of course. And the MAGA people.

Official inside intel sources who are to be trusted are saying that the third greatest threat to global security, energy security, chastity belt security, and your ability to buy baby formula is Russian disinformation. It’s the venomous pit viper of the disinformation kingdom. Unpredictable, poisonous, and potentially deadly if allowed to flow through a social body without the life-saving antidote provided by approved trust and safety profiled official fact-checkers.

The official corporate-state disinformers said Russia and Facebook helped Donald J. Trump spoil queen Hillary’s coronation in 2016. All $180,000 worth of Russian Facebook ads, split between both candidates apparently swung 40 electoral votes his way. For years they ran stories about how Russia had bought the Trump family with pee-pee tapes, compromising bribes, and other malevolent grifting.

The official disinformers ran a good psychological operation to keep the masses completely wedded to their anti-Trump fables which fed their derangement syndrome of all things Orange Man. This psyop involved the entire Democrat Party, the FBI, the President, the Vice President, and the Clinton campaign. The approved official disinformers completely ignored this story and ran those anti-Trump fables on behalf of their bosses at the CIA, the FBI, and the DNC. Even to this day with the truth coming out through the Durham investigation none of the officially sanctioned approved disinformers will admit to their disinformation campaign.

The same official disinformers went out of their way to smear the Brooklyn via Vermont mainstay, Bernhard Sanders, to pave the way for queen Hillary’s primary coronation. Official informers ran 32 smear pieces on the old fool in one week ahead of Super Tuesday. Millions of millennials had such high hopes for old Bernie despite a months-long dedicated smear campaign and gaslighting operations. They still trust the government and corporate media, still voted for diaper Joe and are the highest percentage of voters who are proudly triple boosted. Some people are just better than others at sniffing misinformation.

The official disinformers said that Trump was only elected with the help of pesky little bot farms in Macedonia that spread disinformation amongst the armies of peasant alternative informers who stubbornly refused to stick to the preplanned scripts about pussy hat glass ceilings and the importance of being with her. By “her” they meant a decrepit psychopath who destroyed Libya and has anyone who comes too close to her and her pedophile husband’s criminal child trafficking enterprises accidentally killed on purpose. Those pesky conspiracy theorists call it Arkancide.

Oopsie, did I just spread misinformation?

I meant to say Clintoncide.

On the official disinformation front, Ukraine is dominating Russia. They’re charging through those Russian lines so fast at this rate they’ll be in Siberia’s arctic circle just in time for the midnight sun.

The Ghost of Kyiv is kicking those evil Ruskies out of the sky one jet fighter at a time. Ukraine has suffered no losses and the poor Russians are running out of able-bodied fighting-age men. It just keeps going from good to great for our blue and yellow patriotic democracy-loving friends.

The cocaine comic’s regime has been so dominant they’ll need another $40 Billion looted from the U.S. treasury to keep up their dominance. None of it will end up in the hands of Ukraine oligarchs, Ukrainian Presidential offshore accounts, Russian captured weapons stockpiles, U.S. Congressmens’ offshore accounts, or on horse fincas of Cali or Mérida Colombia. And 10% definitely won’t go to the big guy or his crackhead son.

Any other narrative regarding the war in Ukraine is simply disinformation peddled by Kremlin agents who are paid to push Russian propaganda. Do not allow yourselves to be misinformed by these people who are everywhere. They’re in your social media feeds, at your children’s playgrounds, and potentially hiding under your bed. If you read, see or hear any agent of Russian disinformation be sure to do your patriotic duty and call the Department of Heartland Secrecy’s Ministry of Disinformation at 1-888-Mary-Poppins. There is no greater threat to the power structures of the nation than disinformation. And remember, the only good disinformation is official disinformation.

Disinformation from the official disinformers doesn’t discriminate by race, sex, class, or net worth. You can be a poor peasant in a third world country with a simple Internet connection and know the Ukrainian National Guard is littered with Nazis who have been funded by the CIA for years and hold the Ukrainian government hostage to their demands, or you can be the richest man in the world and still not know that you’re supporting these Nazis with your Starlink satellite Internet service.

Perhaps you can pretend not to know, thereby also spreading disinformation.

Meanwhile, nothing but crickets from the official misinformers on election “integrity”, something they claimed to be terribly concerned about in the months leading up to the 2020 election. It’s no big deal, nothing important, just their favorite thing in the whole world – “Democracy”. 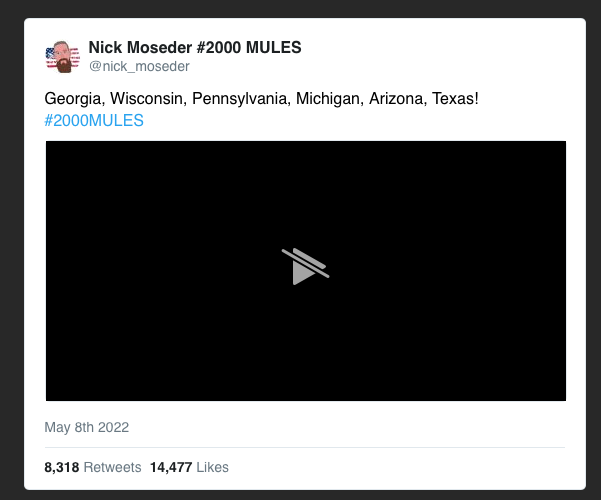 But the greatest threat to “Democracy” is not from rigged elections. The official misinformers will stick to absolute silence on the most important issue of our lifetimes – outsourcing all power to depopulation psychopaths of international organizations when they release their next “virus”. 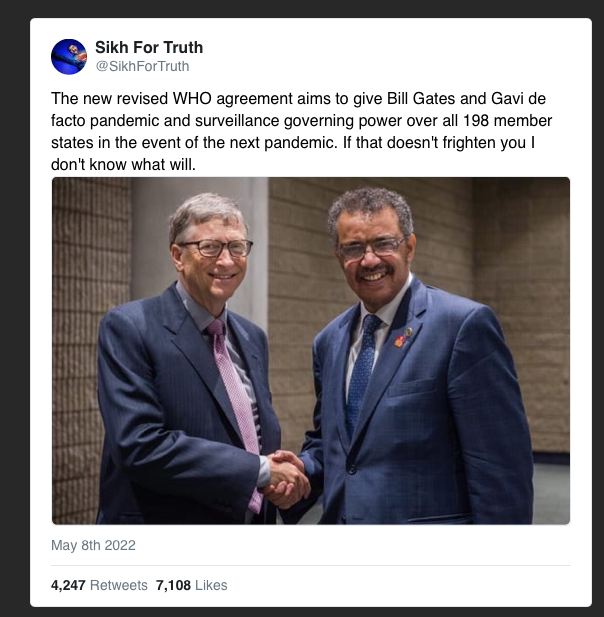 SMS arriving on your phone soon: The World Health Organization has it on good authority from official sources that you came within six feet of someone who tested positive for the latest scariant virus that our backers released and so you’ll need to lock yourself in your home for two weeks until you get an alert on your WHO passport application that says you’re no longer a threat to society. If you leave your home, you’ll be transferred to the nearest quarantine camp for your safety.

Welcome to the new global biosecurity state where a fourth jab will make your blood clots go away and walking your dog in the park will result in two years in prison and a 10,000 CBDC fine, minus eighty points on your social credit score which means you can’t buy train or plane tickets for five years. 2020 and her lab-created Covid-19 were just a test run to determine how much of the population would be obedient subservient dupes. Societies of the west all passed with flying syringes.

It’s all being rolled out in advance of the next “virus”. Across the Atlantic little Miss Nazi of the EU is on her tour of digital surveillance tyranny around the bloc. She’s traveling the continent, checking in to see how the latest yellow stars of European new normal fascism are working on android and IOS platforms. No more Euros for “undemocratic” countries like Romania, Croatia, and Hungary unless their citizens capitulate and download and install their digital yellow star passports.

What are these digital passports for again? Health? Ghetto roundups? Train car monitoring?

People have always been digitally tracked this century, ever since they assumed those disempowering little pocket computers with gorilla glass, 60-megapixel cameras, and super fun emojis were performative communication devices and not total surveillance platforms. The European Union is just upset that Google, Apple, and Fakebook get all the geolocation tracking fun and now the mega-state wants in on the digital tyranny action.

It just wouldn’t be proper to have citizens roaming the bloc free, untracked and untraced, pureblooded and unjabbed, potentially doing un-European things like walking in the park, sitting at a cafe, strolling the Bois de Boulognefor old French prostitutes, or maybe doing the unthinkable and handing out samizdat populist pamphlets of misinformation on the Alexanderplatz.

Oopsie, did I just spread misinformation?

Sorry, there are no old French prostitutes anymore. Not with botox.

Across the channel the chaps who voted to flee that insanity are on the verge of embracing their own nuttiness in the form of free-range war criminal Tony Blair’s Online Safety Bill (OSB). The Obvious Shite Bill that will get honest informers of the alternative media hard time at Belmarsh prison alongside other information criminals like Julian Assange is being sold to the good people of Blighty “…to protect children from online grooming and abuse and to limit the reach of terrorist propaganda.”

That’s always been such a major concern for British authorities. Cough cough.

It took a decade for the official disinformation media to care about children being groomed by gangs of Asian pedophiles across all of England. Actually, that’s disinformation. The official media still don’t care about children being groomed in towns across England because it’s considered racist to point out who is doing the grooming. Political correctness has deadly consequences because it’s just another form of misinformation.

According to the official disinformers, the greatest threat to her majesty’s magic island is still the “far-right” but the Online Shite Bill will soon include anyone who shares the truth with others.

What the official disinformers will never understand is the truth is a magnet. In its absence, the dirty peasants will cross any desert to quench their thirst for any drop of it and the state knows they’ll most often be quenched with alternative media sources that aren’t corrupted by the corporate state.

And millions more are waking up to the fact that the greatest disinformation artists of the MK Ultra machine and operation mockingbird (expanded 1000x since 1974) are in the bloated federally funded MICIMATT (military-industrial complex intelligence media academia think tanks) and the Intelligence bureaus of the five eyes criminal nations. They want the peasants feeding at their troughs of misinformation slop.

It’s so much easier to inject dupes and get them to die to save the planet when they feed at the official troughs. It’s much more difficult to control the critical thinkers consuming “disinformation” which is really just an obvious euphemism for what they don’t want you to know, which we might as well call the truth since they’re full-time liars and propagandists.

While they’re masters at disinformation, occasionally they do tell the truth. By accident.

Is the FDA chief talking about the million Americans the government killed with remdesevir, ventilators, and clot shots, or the millions more killed from missed cancer diagnoses and suicides from lockdowns? The misinformation from the officially approved disinformers certainly was the leading cause of death during the plandemic which is why they’re desperate to keep their death grip on information. It’ll be much more difficult to kill Americans who aren’t misinformed by the official disinformers.

Oopsie. You’ve all had too much truth disinformation for one day.

Soon you’ll get a knock at your door. The Department of Heartland Secrecy has been monitoring this article. Their officers for the ministry of disinformation are on their…

Please deposit my monthly Bitcoin at this address.
bc1qchkg507t0qtg27fuccgmrfnau9s3nk4kvgkwk0

Do your part to flatten the herd.
Get your Good Citizen clothing so your government knows you’re “doing your part” for the “common good” by being dumb and blind.