The Hall Of Mirrors By Zy Marquiez 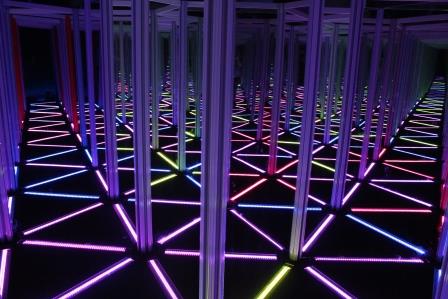 Nigh everywhere one looks people are walking through life blind to the fact that much of what they “know” is merely based on highly biased and selective pieces of information brought about by a narrow channel of media which aim at conforming society to a single narrative.

This surreptitious agenda makes people mirror what they believe are facts, styles, thoughts, ideas, and much more, without giving it a second thought. What’s worse, when you ask these people what they themselves think of the information, they merely answer in sweeping generalities that (again) mirror the conventional narrative. This not only shows the lack of critical thinking mental faculties, but also how the foundation of their Hall Of Mirrors is built merely on quicksand.

To illustrate this pernicious mirror effect, let’s take a look at the phenomenal fictional work of Ayn Rand, The Fountainhead. Speaking about the very issue at hand, the author states:

“But you never wanted that [the truth]. You wanted a mirror. People want nothing but mirrors around them. To reflect them while they’re reflecting to. You know, like the senseless infinity you get from two mirrors facing each other across a narrow passage. Usually in the more vulgar kind of hotels. Reflections of reflections and echoes of echoes. No beginning and no end. No center and no purpose. I gave you want you wanted. I became what you are, what your friends are, what most of humanity is so busy being – only without the trimmings. I didn’t go around spouting book reviews to hide my emptiness of my judgment – I said I had no judgment. I didn’t borrow designs to hide my creative impotence – I created nothing. I didn’t say that equality is a noble conception and unity the chief goal of mankind.   I Just agreed with everybody.”[1]

Such scathing remarks get at the heart of the matter and show the true nature of the mirror effect.

Now moving from fiction, to fact, one salient example of this mirror effect, which is emblematic of an echo chamber, is the fact that many people unquestioningly shared information that Russia (allegedly) was hacking US elections when there was no proof ever justifiably shown by the mainstream press. This meme still surfaces to this day.

In another mainstream example of media duplicity which people mirrored, CNN was recently forced to accept the resignations of three employees for writing fake news, prompting CNN to immediately retract the article.

Such dubious instances show why mirroring unverified pieces of information is one of the most detrimental ways that society poisons itself. What’s worse, the more people take the blue pill, the more people continue to mirror the information endlessly, because, after all, that’s what the masses do – they tend to move as a herd reflecting themselves endlessly in the Hall of Mirrors. Like Winston Churchill once intimated, “A lie gets halfway around the world before the truth has a chance to get its pants on.”

There are other examples, but suffice it to say that what these instances show are that society is socially engineering itself to merely walk on one single path through the corridors of conformity.

Mark Twain once sagely stated that, “It’s easier to fool people than to convince them that they have been fooled.” The corollary to that is that a collective of people employing one (herd) mind, in like fashion, will be much easier to fool because they act as one mind. However, such would not take place if a group of people each walked individual paths, employing their own mental faculties’ keen critical thinking.

As such, individuals need to be careful when sifting through information to make sure the data isn’t corrupted. We all know at times lies work, but what many people tend to miss is that the best lies work so well because they come from modern high priests – the official gatekeepers of the establishment.

History bears this out. In modern times, the mainstream media is the quintessential example of this, with endless repetition being the modus operandi. This is why it’s important now more than ever to be mindful of what’s taking place all around us.

Just as Neo, in the Matrix, could not see beyond the Matrix when he was plugged into it, individuals within the Hall of Mirrors are powerless to see anything but the official narrative when they navigate through mainstream waters, which is why they blindly follow as if they have no other option. Only by walking away, only by stepping outside of the matrix, outside of the Hall Of Mirrors, will individuals be able to come to grips with the situation at hand.

The Hall Of Mirrors, like the proverbial Matrix, is a system. And a system can only be seen for what it is by stepping outside its boundaries; then and only then will individuals begin to see the totality of the deception at hand.

Since time immemorial, it’s been critically thinking individuals that have helped humanity stay afloat in times of deceit; similarly, such takes place in the present, and certainly will in the future.

How will you help change the tides of history?

His other blog, BreakawayConsciousnessBlog.wordpress.com features mainly his personal work, while TheBreakaway.wordpress.com serves as a media portal which mirrors vital information nigh always ignored by mainstream press, but still highly crucial to our individual understanding of various facets of the world.