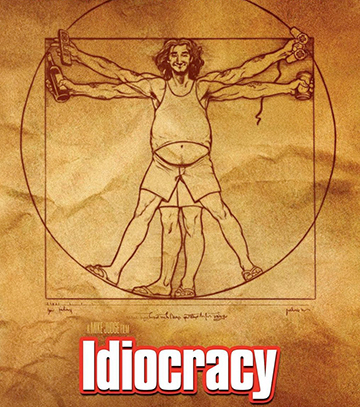 By Thorsten J. Pattberg for the Saker Blog

In 2016, a video game influencer and Youtube superstar going by the handle of Markiplier uploaded a 5-minutes long video of him gazing at a banana. That video immediately got 3 million views. The baby face with fiery-orange top hair wanted to prove his theory that because he is a celebrity, people will watch his content no matter how moronic. And they did.

And this isn’t just a fringe movement. Humanity is actually getting dumber. The technical term from evolutionary biology is dysgenics or selection of the unfit. To put it bluntly, our liberal society allows its not-so-bright members to fornicate like rabbits. Thanks to human rights and a generous welfare state, those idiots have no natural enemies like merit or competition, and fear no consequences for bad life decisions. And when it is time to mate, hell yes, they find each other and multiply.

And that is just the beginning of our downfall. We actually do have to entertain these idiots, and the standard by which we must do that has dramatically declined too.

One talentfree Italian artist in 2021 sold an “invisible sculpture” for $18k, the Financial Times, the Independent and Art.net reported. Not too shabby. Several international “bestsellers” on Amazon.com, the internet book monopolist, now literally consist of blank pages. Blank pages as in: the authors uploaded empty manuscripts. This is supposed to be funny, as I am sure it is to the majority; and gets even funnier as those empty pages apparently sell like hot cakes, including such click-baiting titles as ‘The Complete Book of Reasons to Vote Democrat’ or ‘Inside the Mind of Donald Trump.’

A Dutch museum erected giant turds and poop and feces, entitled ‘Walking through Excrements’. “Wow,” said one visitor, “there were four giant turds inside the 16,000 square feet of museum space!” “One was a brown spiral,” said another. The New York ‘All the News fit to print’ Times spread the news to all Americans. In particular, the masters of taste marveled at the active part of the exhibition, where folks were invited to get nude and put on naked costumes in the shape of vaginas and penises, before posing in front of colossal heaps of stool.

That New York poop exhibition is nothing compared to much larger landmarks of stupidity and idiocy in Europe. Take ‘Centre Pompidou‘, the museum of modern art in Paris. Think of a giant elephant with its intestines on the outside. So these stupid architects designed a street-block sized box covered with toilet pipes and gas tubing and dirt pockets and drip legs and cable mash. Tripadvisor calls it “unbelievable ugly”. The Travelling-Geek calls it “possibly France’s ugliest building.” Even the British Broadcast Corporation BBC calls those “guts of pipes and tubes” the most ugly sight, which “caused shock and outrage in its day.”

And that is just high society. Wait until you see what is going on with the uneducated masses. One female British cosplay idol who got famous for a-he-gao memes, a facial expression Japanese under-aged are supposed to make during orgasm, sold her bathtub water for $30 an ounce. This story apparently triggered 20,000 newspapers and blogs to write about her, which is more publicity than the Beatles or Elvis Presley could generate back in the days with actual stardom.

To our sociology majors, this race to the bottom is unsurprising: Base and perversion are now mainstream entertainment. Putting years into hard work or practicing a skill seems stupid to the stupid. Why not farting and belching during a live stream playing your favorite online shooter game ‘Fortnight’? Done! 170,000 views in one evening. I am famous!

It would be tedious to list the many world leading thinkers who warned us about the coming stupidiocracy. It is too late for that. Instead, let’s poke fun at human stupidity in animated comedy series such as Beavis and Butt-Head (1993-), The Simpsons (1989-) and Southpark (1997-), now watched by billions. One Hollywood film director, Mike Judge, became legendary by making the 2006 sci-fi movie ‘Idiocracy’, now jokingly considered a real-life documentary about America’s intellectual decay. It is basically about an average Joe with an IQ of the exact 100 points average, who is forgotten in hibernation sleep in a secret military experiment and wakes up in the year 2505, where he is now “the smartest man in the world.” In that future, entertainment is all about genital jokes and lots of ass, and gamer chairs have in-built stationary toilets for us screen addicts.

One of the profoundest essays on the Laws of Human Stupidity ever written is the Le leggi fondamentali della stupidità umana (1976), by Carlo M Cipolla who, had he not been Italian, would have ranked among the greatest European philosophers. Of course, an “essay” by definition is unscientific and opinionated, and it could be argued that any attempt at formulating a law of stupidity is… well… stupid already. Nevertheless, Cipolla’s conclusion cannot be unseen, for he argues that stupidity has nothing to do with intelligence or any other characteristic of that person. His Third Law reads as follows:

“A stupid person is a person who causes losses to others while himself deriving no gain and even possibly incurring losses.”

This explains quite frankly why all those idiots mentioned above, from Markiplier to the New York Times, from the architects and artists of Centre Pompidou to the makers of stupid American tv comedy shows, have done nothing for human advancement but wasted our precious life time and made us all more stupid.

So where is the journey going? Nobody can tell us. Investigative journalism went down the toilet. One young Chinese couple in 2015 humped in the changing room of a Japanese Uniqlo branch in Beijing, China. International clothing company for the lower classes? Check. Young people fucking in a box? Check. China and Japan, fuck me this is good: Check! This story made it into the foreign policy sections of the most prestigious News outlets, from the Wall Street Journal to (always!) the British Broadcasting Corporation.

What were those program directors and editors-in-chief thinking? Or better: what were they not thinking? They should know very well that not the degeneracy and the fucking, but the showcasing of that degeneracy and fucking, is the true state of idiocracy. It will probably further erode public morals, our education system and our genetics. But who cares at this point, right?

That said, is it not conclusive to surmise that our clever news feeders know much more about evolutionary biology than they care to admit? Maybe they’ve read Carlo M Cipolla. Maybe they weaponize stupidiocracy against us. If so, they purposely farm this ocean of proverbial human jellyfish so primitive we exist to eat and consume and derive no gain without a brain.

The author is a German writer and cultural critic.

All the original content published on this blog is licensed by Saker Analytics, LLC under the Creative Commons CC-BY-SA 4.0 International license (creativecommons.org/licenses/by-sa/4.0). For permission to re-publish or otherwise use non-original or non-licensed content, please consult the respective source of the content.