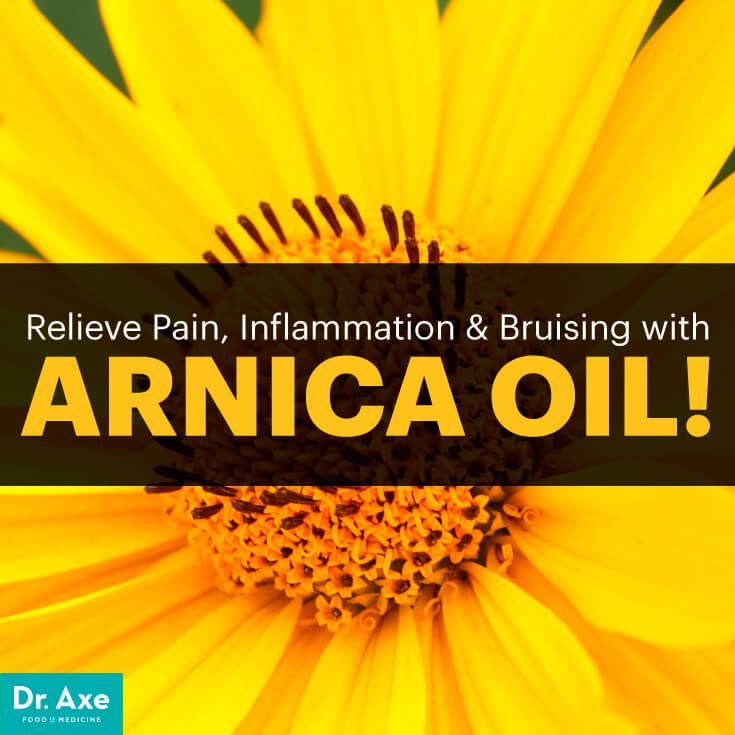 Have a bump? A bruise? Arnica oil is the perfect remedy for so many of our common bodily woes.

Applied to the skin in the form of an oil, cream, ointment, liniment or salve, arnica has been used for medicinal purposes since the 1500s. Arnica oil contains helenalin, a potent anti-inflammatory, making it a must-have for any natural first aid kit.

Its ability to reduce pain and disease-causing inflammation when applied to the skin comes in handy for all kinds of bruises, aches, sprains and even arthritis flare-ups. It can even be applied to insect bites to reduce irritation and inflammation. Arnica oil can also be used to relieve areas of stiffness resulting from flying or long-distance driving.

There are several species of arnica, but the most famous and commercially available is Arnica montana, also known as mountain tobacco, leopard’s bane and wolf’s bane. Arnica plants have large, bright yellow or yellow-orange flower heads, which begin to appear during midsummer and continue blooming well into autumn.

Through steam distillation or CO2 extraction, the flower heads are used to produce pure arnica essential oil, which is combined with a mild carrier oil to produce the ready-to-use arnica oil widely available today. Arnica oil contains several fatty acids, including palmitic, linolenic, linoleic and myristic, as well as thymol. The antibacterial activity of thymol found in arnica essential oil has been well-established and reported in many scientific studies.

Arnica is a genus of perennial, herbaceous plants in the plant family Asteraceae (also called Compositae) of the flowering-plant order Asterales. It is native to the mountains of Europe and Siberia, and is also cultivated in North America. The genus name Arnica is said to be derived from the Greek word arni, which means lamb, in reference to arnica’s soft, hairy leaves.

Arnica typically grows to a height of one to two feet with vibrant flowers similar to daisies and bright green leaves. Stems are round and hairy, ending in one to three flower stalks, with flowers two to three inches across. The upper leaves are toothed and slightly hairy, while lower leaves have rounded tips.

Arnica is available as a 100 percent pure essential oil but should not be applied to skin before it’s diluted into the form of an oil, ointment, gel or cream. In any form, arnica should never be used on broken or damaged skin. The pure essential oil is actually not even recommended for aromatherapy purposes because it’s too potent for inhalation. Arnica is toxic when ingested at full strength but can be taken internally when diluted homeopathically.

A bruise is a discolored area of the skin on the body, which is caused by an injury or impact rupturing the underlying blood vessels. Healing a bruise fast by natural means is always desirable. One excellent natural remedy for bruises is arnica oil.  Simply apply the arnica oil to the bruise twice daily (as long as the bruised skin area is unbroken).

A study out of Northwestern University’s Department of Dermatology found that topical application of arnica was more effective at reducing bruisesthan low-concentration vitamin K formulations. Researchers identified a number of ingredients in arnica that account for anti-bruising, including some that are caffeine derivatives.

Arnica has been shown in studies to be effective against osteoarthritis, making it an effective natural arthritis treatment. The use of topical products for symptom relief is common when it comes to osteoarthritis. A 2007 study published in Rheumatology International found that topical arnica was as effective as a nonsteroidal anti-inflammatory drug-like ibuprofen in the treatment of osteoarthritis of the hands.

Arnica oil is an excellent natural remedy for carpal tunnel, inflammation of a very small opening just below the base of the wrist. Arnica oil helps with the pain associated with carpal tunnel and ideally can help sufferers to avoid surgery. However, for people who decide to have surgery, studies have shown that arnica can relieve pain after carpal tunnel release surgery.

In a double-blind, randomized comparison of arnica administration versus placebo post-surgery in patients between 1998 and 2002, the participants in the group treated with arnica had a significant reduction in pain after two weeks. Arnica’s potent anti-inflammatory effects make it a smart choice for carpal tunnel syndrome.

Arnica oil is a potent remedy for various inflammatory and exercise-related injuries. The positive effects of topically applying arnica have proven to be effective in reducing pain, indicators of inflammation and muscle damage, which in turn can improve athletic performance. Study participants who used arnica had less pain and muscle tenderness 72 hours after intense exercise, according to the results published in the European Journal of Sport Science.

Arnica has been used in traditional medicine for everything from hematomas, contusions, sprains and rheumatic diseases to superficial inflammations of the skin. One of the constituents of arnica that makes it such a potent anti-inflammatory is helenalin, a sesquiterpene lactone.

In addition, the thymol found in arnica has been found to be an effective vasodilator of subcutaneous blood capillaries, which helps facilitate the transport of blood and other fluid accumulations and acts as an anti-inflammatory to aid normal healing processes. Arnica oil also stimulates the flow of white blood cells, which process congested blood to help disperse trapped fluid from the muscles, joints and bruised tissue.

Whether you are a man beginning to experience male pattern baldness or a woman seeing more daily hair loss than you would prefer, you might want to try arnica oil as a natural hair treatment. In fact, arnica oil is one of the best secret treatments for reversing hair loss.

A regular scalp massage with arnica oil can provide invigorating nourishment to the scalp, which stimulates hair follicles to support the growth of new and healthy hair. Some claims have even been made that arnica can stimulate the growth of new hair in cases of baldness. You can also look for shampoos, conditioners and other hair products that include arnica oil as one of the ingredients to reap the benefits of arnica oil.

Dating all the way back to the 12th century, Hildegard of Bingen (1098–1179), also known as Saint Hildegard, a German nun known for her keen observations of nature and physiology, wrote about the healing properties of the Arnica montana plant. This alpine herb also has a long history of use in Russian folk medicine and the Swiss Alps. Since at least the 16th century, mountain people in the Alpine area have used it to relieve muscle aches and bruises.

The dried flowers of the arnica plant are fluffy and fibrous, and can be irritating to the nose if handled improperly. Arnica is sometimes called mountain tobacco, due to the shape of the leaves, which somewhat resemble tobacco. Another interesting fact about arnica — the higher the altitude, the more aromatic the flowers are said to become.

Arnica is sometimes used as a flavor ingredient in beverages and food products, including candy, frozen dairy desserts, gelatins, baked goods and puddings. The amount of arnica used in edible products is always extremely small. In manufacturing, arnica is used in hair tonics and anti-dandruff preparations. Arnica oil is also used in perfumes and various cosmetics.

Arnica Oil — Where to Find It & How to Use

Arnica oil can typically be found at any health store as well as many online retailers. When purchasing arnica oil, look for one that has a low number of natural ingredients. Ideally, the oil contains arnica extract and a high-quality base oil (or oils) such as certified organic olive oil, almond oil and/or grapeseed oil. Beneficial vitamin E sometimes also is included for its natural preservative abilities.

Avoid arnica oil that has “fragrance” listed as an ingredient since the fragrance source is unknown and can often be a skin irritant. Arnica is not meant to be used undiluted on the skin. By purchasing arnica oil, you have an arnica product that has already been diluted properly to make it safe for external use.

Before using arnica oil, make sure to shake the bottle well. You can apply arnica oil to an area of concern two to four times per day using cotton gauze or by massaging the oil directly into the skin until it is well-absorbed. As with any external product, discontinue use if a negative reaction occurs after application of arnica oil.

Topical use of arnica is generally considered safe. If a rash or inflammation occurs at the area of contact, then discontinue use of the arnica oil. Arnica oil may cause an allergic reaction in people who are sensitive to the Asteraceae or Compositae family. Members of this family include ragweed, chrysanthemums, marigolds, daisies and many others. If you have allergies to any of these plants/plant families, be sure to check with your health care provider before using arnica products. You can also perform a patch test to see if you have any allergic reaction to the oil.

Arnica is best used on unbroken skin for short periods of time. Do not apply arnica oil to damaged or broken skin because too much arnica can be absorbed and arnica can be toxic if it gets inside the body. Also avoid contact with mucous membranes.

People with hypersensitive skin as well as pregnant and breastfeeding women should refrain from using arnica oil. Arnica oil should always be kept out of the reach of children. Excessive amounts of arnica taken by mouth can be poisonous and even deadly. Never take arnica internally unless it’s in the form of homeopathic pills that contain too little arnica to cause harm.