The Paradoxical Power of the Four Thunderbirds 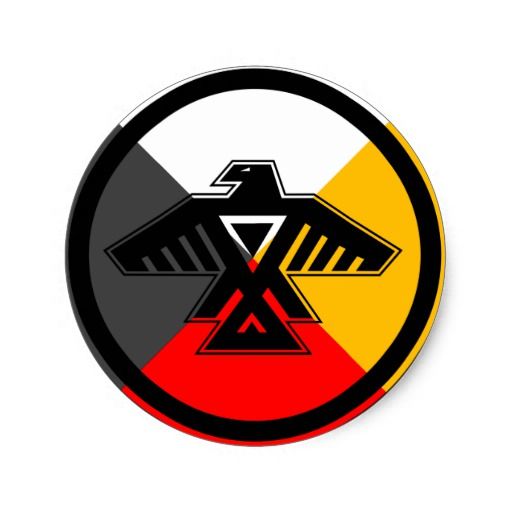 The Paradoxical Power of the Four Thunderbirds

“For the Plains Indians, thunder and lightning symbolized the vast, uncontrollable energy of nature. It’s not surprising, then, that the Thunderbird is connected with the strange, uncontrollable force of the Trickster figure, and his avatar, the heyoka.” ~Steve Mizrach, Ph.D

The four thunderbirds symbolize the four cardinal directions of the medicine wheel. And although different tribes interpret the Medicine Wheel differently, the energy is what matters. This article will focus on the thunderbird energy that manifests at each compass point, and how they can be used as a guide for next-level sacred clowning.

According to the Lakota medicine man Lame Deer, there were four thunderbirds, one at each compass point, but the Western one was the Greatest and most senior (Fire and Erdoes, 1972). We’ll save the mighty Western thunderbird for last. Let’s break them down…

The Yellow Thunderbird of the East:

“Give me the fruitful error any time, full of seeds, bursting with its own corrections. You can keep your sterile truth for yourself.” ~Vilfredo Pareto

The east is the birthplace of spring and renewal. It’s a place of childlike abandon. It’s a place of healing and licking wounds. The thunderbird at this compass point teaches openness and creativity, illumination and inspiration, clearness and clarity.

The initiate who stumbles upon this thunder god is transformed by being hooked to Infinity. A glorious rebirth is at hand. Imagination is ignited by awe. Creative floodgates open to create overflowing flow states. Catharsis becomes the lifeblood of art.

The yellow thunderbird guides us onto the Path of Curiosity. Certainty is left behind on the high hill of our innocence. We are becoming something new, something altogether different than before. Like a butterfly looking back through the tunnel of its broken cocoon (back into Plato’s Cave), we shudder, but we turn into our wings and into a new way of being human in the world.

The Red Thunderbird of the South:

“If you realize that all things change, there is nothing you will try to hold onto.” ~Lao Tzu

The south is a place of letting go. The birthplace of detachment. It’s a place of transcendence through emotional alchemy. It’s a place of interdependence, despite both codependence and independence. The thunderbird at this compass point teaches us how to let go and shed old ways of being.

The initiate who meets this thunder god is initiated by fire through passion. The disconnected world is left behind and an awareness of the interconnectedness of all things manifests. Self-against-world/world-against-self melts into self-as-world/world-as-self. A glorious coalescence is at hand.

The red thunderbird guides us onto the Path of Beauty. It’s a path of eternal rebirth, where the Phoenix lives. For, have no illusions, Phoenix is red thunderbird and red thunderbird is Phoenix, forever burning, forever rising, and forever guiding us into a life-death-rebirth process that transcends time and space.

The White Thunderbird of the North:

“Seek freedom and become captive of your desires. Seek discipline and find your liberty.” ~Frank Herbert

The north is a place of integration. It’s a place of cultural community and high wisdom. It’s a place of health and safety through social connection. The thunderbird at this compass point teaches endurance and great joy, dignity and values, respect and reflection.

The Black Thunderbird of the West:

The west is the place of absolute vulnerability. It’s where the spearhead of change goes to sharpen itself. Home of whetstones and Philosopher’s Stones, lodestones and steppingstones, the west is where all directions go to discover Direction—the true True-North. The thunderbird at this compass point teaches us how to transform fear into love. It teaches bravery and impeccability, resilience and excellence, robustness and heroism.

The initiate who meets this most ancient of thunder gods is initiated by torrential waves, pounding rain, tempest winds, and the tears of all gods. The initiate becomes the initiated by becoming the thunderbird itself, flying high into everything.

Perched upon the Elbow of the Universe, looking down with Over-Eyes, with a thunderbird’s-eye-perspective that puts all things into perspective, the wound of the world is revealed. This wound becomes the thunderbird’s heart, which becomes our heart upon initiation.

The black thunderbird guides us onto the Path of Courage. Comfort is left behind in the shrinking comfort zone of culture. We are here to stretch. To become. To Self-overcome through high humor, high wisdom, and high courage. We are here to challenge the gods. We are here to upset “the way” with “a new way.”

Indeed. As Steve Mizrach, Ph.D said, “Like Thunderbird himself, the heyoka was thought to be a conduit to forces that defied comprehension, and by his absurd, backwards behavior he was merely showing the ironic, mysterious dualities that existed within the universe itself.”

In honor of this mysterious duality, we become the dark-reminder in the forgotten-light. We are here to soak in opposites, so that we may return to “the tribe or nest” with magic elixir and a new way of being human and thunderbird alike. Then we fly east, and repeat.

This article (The Paradoxical Power of the Four Thunderbirds) was originally created and published by Self-inflicted Philosophy and is printed here under a Creative Commons license with attribution to Gary Z McGee and self-inflictedphilosophy.com. It may be re-posted freely with proper attribution, author bio, and this statement of copyright.