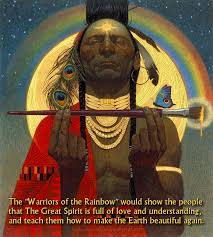 The Little Green Book of Revolution is a pro-individual and anti-institutional look at the history of peaceful proactive revolution through the looking glass of original American Exceptionalism, native American Indian culture and The First Amendment. It is an exploration of the environmental destruction and the oligarchical design of the present energy distribution systems. The Little Green Book of Revolution leads to understanding the NWO, the NetherWorld Oligarchy, and offers ideas to counter the environmentally destructive oligarchical institutions of the NWO.

If you are supportive of institutions then you better not read this. Stop here. If you discard the idea of Two-hearts and The Seven Generations idea, then maybe this is not for you. If the sentiment, ‘fuck war’ irritates you because of foul language and not because we still struggle with war, then surely there is other reading material more appropriate to your refined sensitivities. If you support war or condone foul language, if you support the status quo reinforced by Demoncats and Republicons or whatever leftwing/rightwing paradigm you’re under, then you are probably trained to be hateful of revolution and you might as well stop right here. If the sentiment inspires you because the foulness of war makes such expletives appropriate, then I hope you’ll read on.

“You can’t wake a person who is pretending to be asleep.” ~Navajo proverb

“We will be known forever by the tracks we leave.” ~Dakota proverb

“When a man moves away from nature his heart becomes hard.” ~Lakota proverb

We live in a Wendigo war world, a place where force dominates and an insatiable appetite for stuff is considered a quality characteristic. The ravenous Wendigo with its penetrating claws endlessly digging can only be confronted with open hands and open heart. Wendigos want and only by sharing can they be defeated. You cannot fight a Wendigo, for it is made up of colorless evil, fighting it only feeds it. A rainbow is the opposite of colorless evil. A rainbow is made from clarity and also is a reflection of every color. A rainbow is symbolic for omnipotent grace in its clarity and its ability to reflect all seven colors. A rainbow represents no thing and all things at the same time. Diamonds share this quality of clarity and ability to reflect. A rainbow warrior is like a diamond rainbow, clear but reflecting all colors, opposite of unclear evil and colorlessness.

“When I was ten years of age I looked at the land and the rivers, the sky above, and the animals around me and could not fail to realize that they were made by some great power. I was so anxious to understand this power that I questioned the trees and the bushes. It seemed as though the flowers were staring at me, and I wanted to ask them “Who made you?” I looked at the moss-covered stones; some of them seemed to have the features of a man, but they could not answer me. Then I had a dream, and in my dream one of these small round stones appeared to me and told me that the maker of all was Wakan Tanka, and that in order to honor Him I must honor His works in nature. The stone said that by my search I had shown myself worthy of supernatural help. It said that if I were curing a sick person I might ask its assistance, and that all the forces of nature would help me work a cure.” ~Tatanka-ohitika, Brave Buffalo

The American Indians lived in harmony with their environment for millennia however there was occasionally disharmony among the peoples of Turtle Island. Tribes battled each other variously, but never on the mass scale of European war. The term bury the hatchet comes from the Iroquois legend of the peacemaker who brought together the five nations under the pine tree of peace.

During a time when people became unthankful there was war in every village. A vicious cycle of war and revenge spun out of control to the point no one knew what the fight was about anymore. A child was born to a virgin and when he grew up he traveled to all the nations to convince them to unite in peace. After a time, he was able to bring the people together and convinced them to literally bury their weapons under a white pine tree and symbolically bury their hatred and vengefulness. He also tied together arrows from each tribe to represent their unity as one. Rainbow warriors have to make peace so we can heal Earth Mother. Without forgiveness and unity there will be no peace, without peace, there will be no healing. The world is very much in a state where we have forgotten what we’re fighting about, living vengefully, continuing on a downward spiral of revenge and war.

Rainbow warriors are clear, and of every color or vibration, but a successful revolution must be green. Certainly the green symbolism of integrative energy is ultra-important and of immediate necessity for revolution, but further a successful revolution has to be green in relation the heart chakra. If a revolution is not begun in, and does emanate from the heart, if not done as an act of love then, more than likely the revolution will fail. The heart chakra is green and is central among the seven chakras. Centrality is indicative of power, grace, love and equanimity. Be centered and open in diamond like clarity as a Rainbow warrior. 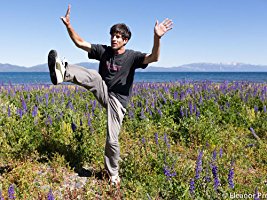 Ethan Indigo Smith is the son of a farmer and nurse who was later adopted by artists. Ethan was raised in Maine, Manhattan, and Mendocino, California. Ethan is a proud dropout. Ethan has traveled the world and has been employed briefly as Private Detective, a dishwasher, a valet, a snowboard instructor and always a poet.

Ethan Indigo Smith meditates, practices Wu tai chi chuan, The Five Tibetan Rites and various yoga. Ethan snowboards and researches nuclear experimentation. Ethan plays basketball and is a philosopher. Ethan is an activist, mainly with the pen, always siding with individuals among institutions. All of Ethan’s writing, no matter if philosophy or satire, is focused to enhancing consciousness. He writes towards a peaceful world with a sharp and unique perspective.

Ethan is a proud dropout but steadfast scholar. After dropping out from academia he later dropped out of the proverbial rat race entirely, moving to The Sierra Nevada mountains in California to snowboard for many winters. Being a dropout with enhanced observational skills enabled Ethan Indigo Smith to honestly observe and present his research unfettered by institutional hindrance.

Ethan’s articles appear on several leading news websites and magazines from around the world with global audiences including wakeup-world.com.

Ethan’s first book is The Complete Patriot’s Guide to Oligarchical Collectivism. In it he explores history, philosophy and activism through an Orwellian lens.

One of his more recent works is The Geometry of Energy How to Meditate. It presents a way for all levels of practitioners to expand their individuation and find their true nature. It contains esoteric secrets and meditation techniques all derived from and related to the four dimensions of geometry. The Geometry of Energy presents the mathematics of meditation, some of the most simple of sacred geometrical concepts.

The Matrix of Four, The Philosophy of the Duality of Polarity, is Ethan’s metaphilosophy. It delves into the development of individual consciousness and understanding the collective consciousness. The metaphilosophy provides insight on meditation as well as political observation through universally shared ideas leading to the portrayal of the righteous rebel archetype as well as the philosophy of nullisis.

Down and Out in Mendocino is Ethan’s first published fiction and one of the first in the genre of pot fiction. It is a gut busting mystery traversing through Northern California eccentricity set in the coastal village of Mendocino. The scenic misadventure is part hilarity and part legend concerning a secret with potential global ramifications if revealed.

108 Steps to Be in the Zone is an inspirational exploration of the metaphysical number 108, directly symbolic for oneness, nothingness and the infinite. Ethan explores how the sacred number can be utilized to enhance intuition, practice meditation and elaborates 108 steps to develop self and surroundings in the toxic postmodern world.

Tibetan Fusion describes how to meditate and how to perform the Five Tibetan Rites of Rejuvenation in combination with simple yoga, tai chi and chi gung to enhance and build your energy. It also elaborates on Tummo, a form of psychic yoga.

The Terraist Letters is Ethan’s second piece of pot fiction, this one set in uptown Manhattan. The Terraist Letters is the story of Sean Enstitue. Ethan was inspired to write it after the Fukushima disaster and after he saw that people approached the problem apathetically. The story contrasts the global promotion of nukes and the global prohibition of nugs, but it is much more than potfiction. It is a wild story of the archetypal rebel only set in the new world order, where our postmodern hero is a blunt smoking, high school dropout, a graffiti artist and physics hobbyist who believes we are under archon extraterrestrial invasion.

A Holiday Hazing, Santa Clause Syndrome is an off the wall look at postmodern society that provokes deep thoughts and guttural laughter. Ethan essentially asks, ‘how does lying to impressionable children about the Santa Claus story affect them?’ His answer damns the secular Santa story line and many cherished institutions, including, arguably, the liquid science of psychiatry.

You May Support Ethan by Purchasing His Latest Book! 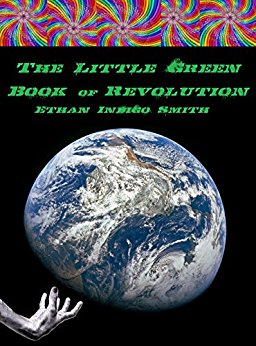 The Little Green Book of Revolution

The Little Green Book of Revolution is a pro-individual and anti-institutional look at the history of peaceful proactive revolution through the looking glass of original American Exceptionalism, native American Indian culture and The First Amendment. It is an exploration of the environmental destruction and the oligarchical design of the present energy distribution systems. The Little Green Book of Revolution leads to understanding the NWO, the NetherWorld Oligarchy, and offers ideas to counter the environmentally destructive oligarchical institutions of the NWO.