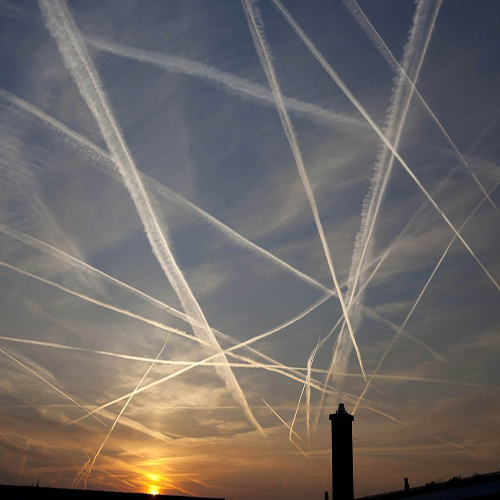 A group of climate scientists are currently advocating a ‘strike first’ preemptive move against climate change and global warming although you probably won’t have heard much about it. The plan is to block the sun, akin to mimicking a volcanic eruption, which is why it’s called The Mount Pinatubo Effect which would implement an ongoing aerosol injection campaign in the atmosphere in order to veil incoming SUNLIGHT.

Three extraordinarily naive assumptions form the basis of this approach:
1) We know everything there is to know about global warming
2) We can fix the problem
3) We should fix the problem

“Clear-sky whitening”, so-called by the small, elite group of [mad] scientists, which involves dispersing aerosols via planes to form ‘clouds’, has been in the research stage for decades. 2017, however, is the year that this “Solar Geoengineering Governance Regime” (keep your eye on the impressive, vague terminology) will go from the research phase to Full Scale Global Deployment.

Lack of public information shielded by an abundance of confusion tactics, misinformation, outright denial, and euphemistic terminology have worked so far to hide the facts. But those demanding to know the truth have been paying careful attention to the evolution of the terminology surrounding what many of us have known up to now as ‘chemtrails’. Language does indeed matter. Here is a partial list:

The media even coined the term Secret Large-scale Aerosol Program (SLAP) as a dead end for people new to the subject. Little did we know then that the regime was just buying itself a bit more time before launching its crazy scheme this coming spring.

On May 18th, 2017, then, the self-proclaimed Solar Geoengineering Governance Regime is being established in Chicago to create a body that will supersede the United Nations, its goal being to initiate this full scale global deployment of Solar Geoengineering designed to block the sunlight reaching the earth.

Prior to implementing such a controversial program, we should surely consider the human health impacts of injecting toxic chemicals into the air, debate the human right to a healthy environment as well as the public’s right to participate in environmental decision-making. The “regime”, however, has already met to plan and frame the public debate, anticipating and directing the reaction of climate activists. It has even detailed how the media will be used to “manifest the will of the populace” in order to give governments “no choice” but to implement it. “Society”, it conveniently believes, “is not good at strategy” unlike the regime itself which has spent up to 15 years planning, researching and strategizing a worldwide deployment of Solar Geoengineering.‎

Climate scientists, however, are very divided as to what causes global warming. Similarly, it is not understood what the effects of geoengineering intervention are or will be, nor how nature will react. The level of unpredictability calls for risk assessment analysis that focuses on the probable outcomes.

The Hurricane Aerosol and Microphysics Program (HAMP), for example, is a geongineering research program that uses black carbon soot aerosol deployment to modify hurricanes. Various studies have identified black carbon as a direct cause of global warming, yet the impact of such aerosol injections have not been adequately considered/researched or even discussed when addressing the global warming phenomenon. In fact, it is plainly counterintuitive to use a chemical component that promotes exactly that which you’re trying to avoid.

We cannot afford to experiment only to find at a later point that irreversible, catastrophic mistakes have been made along the way, yet experimentation seems to be exactly what is happening here.

But these can be avoided. Carbon-catching technology, aggressive green technology incentives, engineered phytoplankton ocean blooms and regenerative urbanism all offer far safer alternatives to the global stratospheric aerosol injections options. Having framed the entire debate behind the scenes means that rights and informed consent have been totally disregarded and disrespected. Shockingly, actors and media are even being hired to frame the debate and shape public opinion. What chance do we have to stop this lethal, insidious and dishonest assault on our physical world?

Silence and inertia are not options in the face of such a threat, however. We have to act, and act quickly.

Public representation is the only just, rational course and must come from those who are directly affected by the Solar Radiation Management program. Which is to say, we need to have elected members from an adequate sample of researchers and affected parties that represent humanity as a whole. This is how a rights-based, consensual approach to the problem works.

What we can’t have is representation by a small few who are essentially insulated from any and all harm due to their socio-economic status. Which isn’t ‘representation’ at all. Yet this is what we have.

We do not want to see a repeat of the Flint, MI water debacle, nor the public backlash that ensued when Bolivians stood up against privatization of their water supply in Cochamba.

For a decision of such magnitude, a rights-based, nondiscriminatory, inclusive approach to climate change adaptation and mitigation must be adopted. Full equality must be adhered to as acknowledged in the Rio Declaration, where the right to public participation in environmental decision-making was declared. In the high-risk and uncertain domain of geoengineering, it is clear that more scrutiny and research are needed. The blanket assumption that the best interests of all players are being considered and respected is simply not true as things currently stand.

Values, ethics, law and human rights are all inextricably linked. These must be taken into account through a process of active public participation when highly experimental programs are being undertaken that put human life and the environment at risk.

We must bring public awareness to the agenda of the Solar Geoengineering Governance Regime, and demand public inclusion, scrutiny and transparency to such an endeavour.

As a concerned citizen of Earth, I have had no choice but to respond to such an atrocity with a public awareness campaign. Nothing can be more damaging to human life than taking away our sun. An awareness tour to bring attention to the Solar Geoengineering Regime setup in Chicago, May 18th launches on April 20th in Miami, Florida and will visit twenty-four cities across North America. 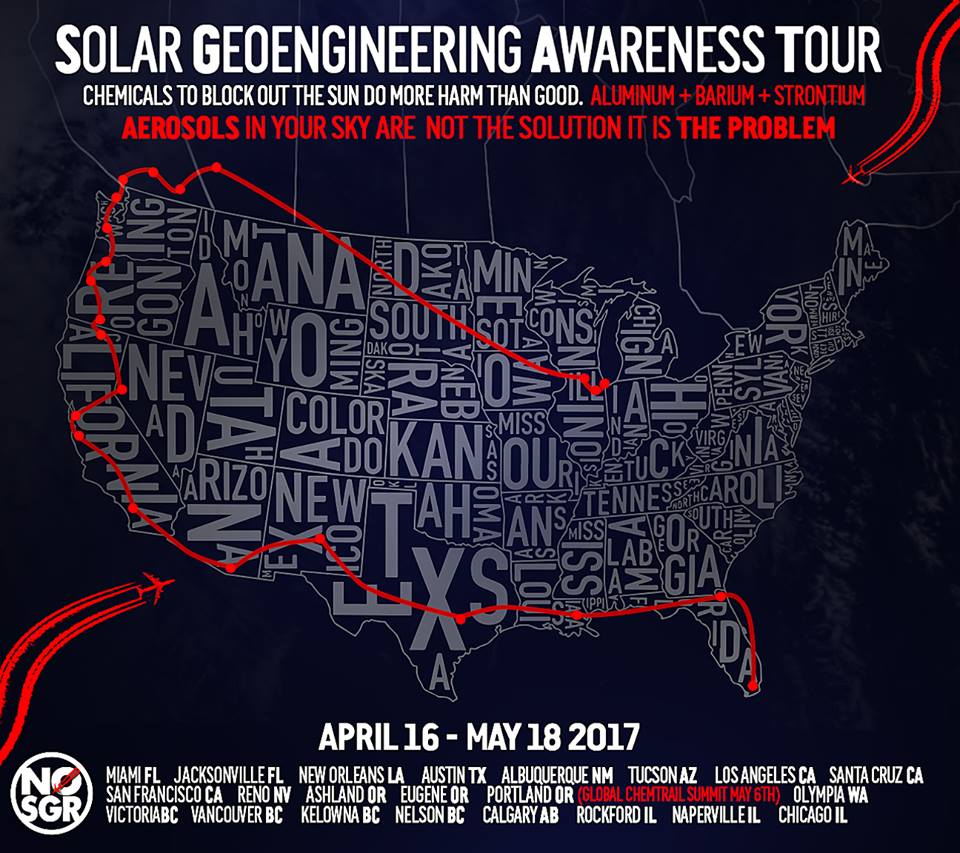 The public awareness campaign has evolved into a race to tell everyone about their diabolical plan before they sugar-coat it and say it’s our only choice, and as you can see, they are already spoon-feeding it to the public. 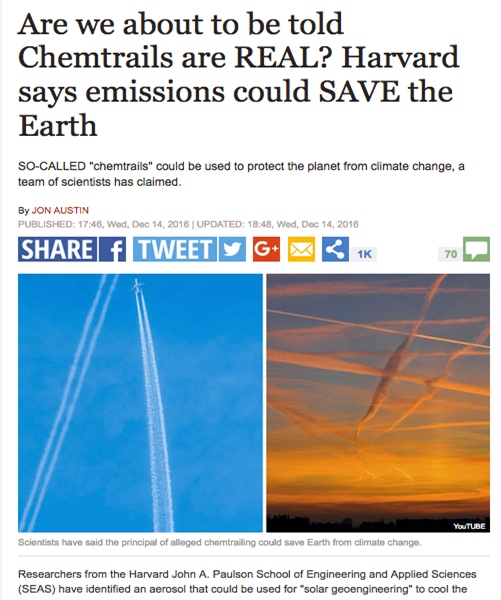 The tour will also feature the launch of the documentary FrankenSkies which delves into the topic of the Stratospheric Aerosol Injections (SAI) and further exposes the Solar Geoengineering Regime (SGR). Here is a sneak peek:

Matt Landman is a 36 year old activist filmmaker with a passion to bring transparency and scrutiny to Solar GeoEngineering. He is originally from the Washington D.C area, a Virginia Tech Alumni and prior to activism had a background in finance and business. With an M.B.A and a knack for strategy and analysis, Matt is now directing his entrepreneurial sustainable focus to activism and claims he won’t stop until we have chemtrail-free clear skies for good. “I’m just a normal guy who woke up to chemtrails” he claims as he strives to “wake people up” every single day. With a late January expected launch of his website [*ActualActivists.com] and a late February feature documentary film release about Solar Geoengineering, FrankenSkies, Matt should be pretty busy in 2017 as he stays spreading truths on Chemtrails,Vaccines and Fluoride especially.
Follow activist, filmmaker Matt Landman on Facebook at  https://www.facebook.com/landman808 or [*www.ActualActivists.com]
*Soon to be activated