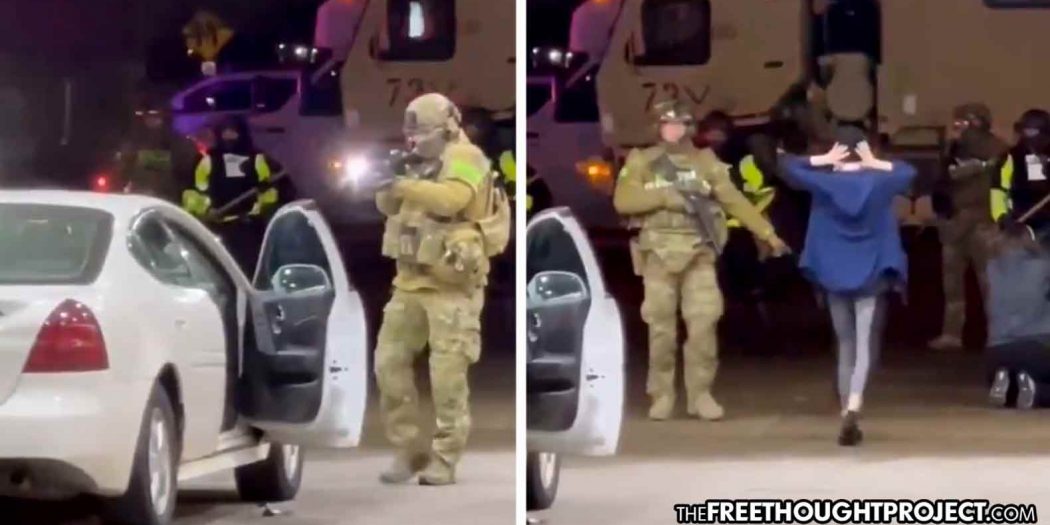 Minneapolis, MN — On April 11, 2021, just miles from where George Floyd took his last breaths on Earth as they were squeezed from his body by officer Derek Chauvin, Daunte Wright was targeted by police over an alleged expired tag. Because the American police state is a violent behemoth which knows no self-restraint, a few moments into the stop and Wright would be killed at the hands of those who claim to protect him.

The unjust nature of Wright’s death sparked massive backlash in the form of protests and riots leading to Mayor Jacob Frey of Minneapolis declaring a state of emergency.

With the curfew implemented and hundreds of protesters arrested for simply being outside too late, the unrest tapered off last week. However, videos have surfaced showing some rather shocking scenes unfold as Minneapolis and the surrounding areas turned into an outright militarized police state.

Even folks who were not involved in the protests have been rounded up under what many are saying appears to be martial law. Over the weekend, video surfaced of the heavy handed militarized tactics being used by both police and military who were called in to quell the unrest. It is nothing short of shocking.

According to the person who posted the video, several women, not affiliated with the protests, were attempting to gas up their vehicle — apparently after curfew — when heavily armed soldiers surrounded their car. The soldiers then ordered the women from the car with AR-15 rifles pointed at their heads.

As the completely harmless women, one of them in yoga pants, are ordered out of the vehicle, they are then forced to kneel on the ground with their hands on their heads. The scene was akin to a raid on the Taliban in Kabul, but happened in Minneapolis, and instead of the Taliban, it was innocent women in yoga pants.

Naturally, the footage has sparked criticism online with many comparing the scene to martial law.

“Whoever ordered this idiocy shld be unceremoniously & summarily removed from office. Arresting ppl at a MN gas station—pointing military grade assault rifles in their faces—is just outrageous. No elected official shld ever get away w this,” one Twitter user wrote.

“When there is widespread civil unrest, a state basically has 2 options: 1 – make a few concessions to public demands, or 2 – use tyrannical force to quell the unrest. And it’s quite obvious the direction our ruling class wants to go as public anger and despair continues to grow,” another tweet read.

Predictably, the debate online devolved into Twitter users blaming Donald Trump or Joe Biden — depending on which side of the political trough they choose to feed. Unfortunately both of them miss the point as this militarized police state is bipartisan. It was here long before Trump and began ramping up under George W. Bush during antiwar protests and came to a head under Obama during the Ferguson unrest.

There was one difference, however and some folks pointed out how the mainstream media didn’t even pick this story up at all now that Trump is out of office.

“This is the “return to normalcy” people were wanting. Because last year….whats happening in Minnesota, Portland, and Chicago right now would be on every news station and would be the top topics on Twitter. But now that the orange man is gone….we can talk about Cats again,” wrote one Twitter user.

Though this person is likely pro-Trump, his point holds merit. The national guard ordering women out of their car at gunpoint for pumping gas after curfew is most assuredly a national story — yet we couldn’t find a single mainstream media outlet who covered it.

When you watch the video below, remember as the mainstream media fills the airwaves with divisive propaganda, they are choosing not to show Americans the massive police state being constructed around them: