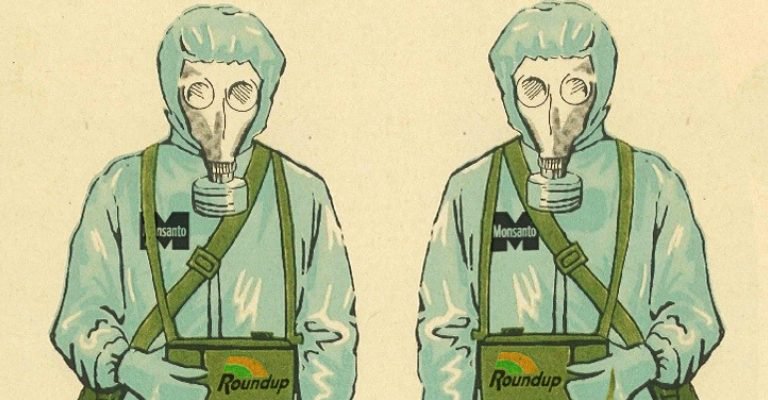 Most of the food that we eat makes a long and tortuous journey to our tables, often over great distances or from unknown origins.

Whether it’s factory-farmed eggs, processed chicken, fresh fruit from the west coast, seafood from the east coast, or a glass of wine or ice-cold beer, we often assume that what we’re eating is generally healthy or at least won’t harm us if enjoyed in moderation.

However, a new report by public-interest watchdog group U.S. PIRG has revealed that most of the top beers and wines in the United States are contaminated with glyphosate, the main ingredient in Monsanto’s weed-killer, Roundup.

Roundup is a controversial herbicide that has been linked to cancer and other health problems in studies by the World Health Organization and the State of California, among others. In recent years, thousands of people have blamed Monsanto for being a key contributor to their cancer, leading to calls across the world for the weed-killer to be banned.

Out of the 20 brands tested, glyphosate was found in 19 of them – including in 3 out of 4 organic beers and wines.

Among the beverages with the highest concentration of glyphosate was 2018 Sutter Home Merlot at 51.4 parts per billion (pbb) and Tsingtao, a beer from China, with 49.7 pbb – a rather high level when compared with the U.S. beer with the largest amount, which was Coors Light at 31.1 pbb.

Organic beverages like 2016 Inkarri Malbec lagged behind at 5.3 pbb while 2017 Samuel Smith Lager had 5.7 pbb.

In a statement, organic winery Frey Vineyards noted that while it refrains from the use of both herbicides and pesticides, “glyphosate in trace amounts is now found in rainwater because of its application to conventionally farmed agricultural land. Glyphosate in trace amounts can be found in many food products across the United States. We urge consumers to speak up to ban all use of glyphosate.”

Peak Organic IPA was the sole adult beverage that had no trace of the likely carcinogen.

The group warned that while the level of contamination isn’t necessarily deadly, the discovery raises potential health concerns.

“The levels of glyphosate we found are not necessarily dangerous, but are still concerning given the potential health risks. What is surprising is that glyphosate found its way into almost every type of beer and wine tested, including organic products. That indicates that consumers who want to avoid glyphosate, due to its probably health effects, would have a difficult time doing so. Considering the ubiquity of glyphosate found in many foods tested by other scientists and groups, and the amount of glyphosate sprayed throughout the country, people are constantly exposed to glyphosate.”

While industry representatives have sought to minimize the report in media statements to USA Today, PIRG stressed that it remains important for consumers to understand the potential danger of imbibing pesticides on a regular basis.

“No matter the efforts of brewers and vintners, we found that it is incredibly difficult to avoid the troubling reality that consumers will likely drink glyphosate at every happy hour and backyard barbecue around the country.”

The U.S. Environmental Protection Agency (EPA), for its part, has fiercely defended the use of glyphosates, telling USA Today in an email that it “found no meaningful risks to human health, including infants and children, when the product is used according to the pesticide label,” and that it has concluded at this stage that the herbicide is “not likely to be carcinogenic” to humans.

The EPA’s conclusion is sharply at odds with that reached by the World Health Organization, which found glyphosate to be a probable carcinogen in 2015 – a conclusion that the State of California concurred with in 2017. Monsanto has tried to appeal the case paving the way for its legal liability, along with parent company Bayer, in thousands of lawsuits where consumers and farmers have blamed Roundup for their incurable cancer.

In October, the first court trial over Roundup’s link to cancer ended with a victory for groundskeeper DeWayne Johnson, who was diagnosed with terminal cancer at the age of 42 due to the herbicide. Now 46, Johnson will be paid $78 million, but may not live long enough to receive the money.

And starting Monday, a jury in San Francisco federal court began the first federal case on Roundup’s links to a 70-year-old man’s cancer, which may pave the way for hundreds of similar cases. On its first day, the judge threatened to “shut down” any discussion of Monsanto’s long track-record of pressuring government regulators and manipulating cancer research.

Critics have long accused Monsanto of using its wealth and power to force regulators to declare glyphosate safe, including through outright collusion with EPA officials who killed past investigations by the agency.

Nevertheless, PIRG hopes that their study will help inform consumers about what’s at stake in the federal trial – and what goes into their bodies. The group has called for the ubiquitous herbicide to be banned until it can be proven safe, and for consumers to opt for organic products whenever possible due to the significantly lower amounts of glyphosate found in them.

“With a federal court looking at the connection between Roundup and cancer today, we believe this is the perfect time to shine a spotlight on glyphosate … This chemical could prove a true risk to so many Americans’ health, and they should know that it is everywhere – including in many of their favorite drinks.”