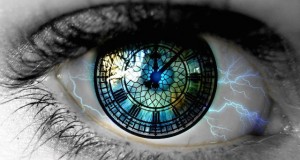 A few years ago a friend of mine was knocked off his motorbike at a high speed. The impact catapulted him through the air, and when he hit the ground he lost consciousness. The next thing he knew he woke up in hospital eight hours later. But he can still vividly remember the few moments before he lost consciousness:

I saw the car’s windscreen shattering. The glass sprayed out so slowly, like a fan, and it looked beautiful. All the pieces were shining in the sun. I felt like I was floating through the air, almost as if I wasn’t going to come down. I looked into the sun and it was like being on a plane, when you’re above the clouds and it’s a brilliant white colour.

I am always surprised when I fall off a horse how long it takes me to hit the ground! I feel as if I am floating through the air and I always think that I am going to land really softly so I relax and wait to land. And then, when I hit the ground and am lying there winded, I am completely surprised.

The same slowing down of time often occurs in emergency situations, when our lives are threatened. There are many reports of time slowing down massively during earthquakes, for example. One woman who experienced the devastating earthquake in Armenia in 1988 reported that, “It was like a slow motion movie. There was a concrete panel slowly falling down.” The photographer Ansel Adams describes being woken up by an earthquake at 5am, with his bed crashing against the walls and windows smashing. “The roaring, swaying, moving, and grinding continued for what seemed like a long time,” he writes. “It actually took less than a minute.”

Many professional sportspeople are familiar with these kinds of experiences. Sometimes, in moments of high intensity, sportspeople find themselves entering the “zone”, a state in which everything “clicks” and they shift to a higher level of performance. New reserves of effort and energy are released inside them and they suddenly become capable of feats which would normally be beyond them. Without even trying very hard, everything they do seems naturally and inevitably perfect. Time moves much more slowly than normal – in fact, this is often the main reason why the player is capable of such astounding feats, because he or she has more time to play with, more time to anticipate his opponent’s actions and to position himself.

The American tennis champion Jimmy Connors, for example, describes how when he was in the “zone”, the ball seemed to grow in size as it came over the net, and moved so slowly that he had all the time in the world to choose how and when to hit it.

And this is exactly what happens in these experiences: for a short period, we lose our sense of ego, our sense of being an “I” trapped inside our heads – or at least this becomes much weaker than normal – and so we lose our normal sense of time passing. Our normal conscious mind is immobilised, and we cease to be subject to time (at least to the same extent).

There are two ways in which the ego can be immobilised. The first is as a result of intense concentration or attention, which is what happens in sportsmen’s “zone” experiences. This can also happen in meditation, when we focus our attention on a mantra, or on our breathing. If we can keep our attention focused, we begin to experience a state of mental quietness. Our thoughts begin to slow down, until eventually (if we’re having a really successful meditation), they fade away altogether. And, at the same time, our normal sense of ego fades away. We experience a state of egolessness, of no longer being an “I” chattering away inside our heads. The act of concentrating our attention has the effect of dissolving the ego. This is why states of deep meditation also bring a sense of timelessness.

The super-attention which sports involve can also immobilise the ego. A golfer or racing driver concentrates hard for hours and, eventually, when he or she reaches a certain intense pitch of concentration, their normal sense of ego may fade away – and, as a consequence, so may their sense of time. A short distance athlete doesn’t need to keep her mind focused for as long during the actual event, of course, but she will aim to build up a state of intense “focusedness” for hours beforehand, ridding her mind of other thoughts and distractions.

The second way in which the ego can be immobilised is by sudden shocks. Teachers of Zen Buddhism try to catch the egos of students off guard by hitting them with sticks while they’re meditating, by giving them nonsensical answers to questions or by giving them koans (or riddles) to solve which make no sense at all, which the student can puzzle over for hours before his or her ego is finally immobilised by strain and confusion. It’s taken for granted that when the ego is immobilised, an experience of satori (or a higher state of consciousness) will result. And this is probably what happens in accidents and emergencies. The sheer shock of the car crash, the engine failure, the earthquake or the violent encounter, paralyses the ego. It all happens so quickly that it can’t react in time and gets left behind. As a result, with no (or at least very little) sense of ego, the person also experiences a sense of timelessness, or at least an acute slowing down of time.

This connection between time and the ego also partly explains why psychedelic drugs can drastically slow down time. Drugs like LSD and magic mushrooms can, in Aldous Huxley’s words, “telescope aeons of blissful experience into one hour”. The Russian philosopher P D Ouspensky once made a series of “mystical experiments”, which probably (since he doesn’t state which drugs he used) involved inhaling ether. He experienced what he calls an “extraordinary lengthening of time, in which seconds seem to be years or decades”.
And part of the reason for this is that psychedelic drugs have an “ego subduing” effect. They often weaken our sense of being a separate I, complete with memories, beliefs and a self image, and we may feel that we’re fused with the world which normally seems outside us. (But sometimes the ego may be permanently damaged by this experience, which is one of the reasons why psychedelics can be so dangerous.)

Hypnosis can also have a time expanding effect. It’s difficult to say exactly what happens when a person becomes hypnotised, but it seems clear that the “shutting down” of the conscious mind or ego is the key aspect. When a hypnotist asks you to concentrate on his pocket watch or to listen to him counting to 20, what he’s trying to do is to paralyse your ego, to put it into abeyance, leaving you without your normal sense of identity and your own will. And in view of this, it’s natural that states of hypnosis can slow down time too.

The most striking evidence for the time slowing effect of hypnosis are the amazing feats people under hypnosis are capable of, which (like the amazing feats sportspeople perform in the “zone”) would be impossible in normal time, simply because there wouldn’t be enough “time” to do them. The psychologist Gordana Vitaliano gave hypnotised subjects a complex mathematical task to do, something that normally takes around 10 minutes, but which they completed in just 15 seconds.

In another experiment, a hypnotist slowed down his subjects’ sense of time by pretending to slow down a metronome which they were listening to, until they believed that it was only beating once every minute. He then told them they had an hour to accomplish certain mental tasks, such as planning a complicated meal. In reality, they were given just 10 seconds, but they fed back with the kind of wealth and detail of information which would only have been possible after an hour or so of normal time. In a similar experiment, a hypnotised woman produced several dress designs in less than a minute, saying afterwards that she felt like she had experienced an hour or more of normal time within that minute.

All of these experiences show how bound up our sense of time is with the ego. As soon the ego is disturbed in some way, or put into abeyance, then time slows down radically or disappears altogether. This suggests that in a sense our experience of an evenly flowing linear time is a kind of illusion created by the ego. Children’s experience of time shows that it doesn’t exist before the sense of ego develops, and the experiences we’ve looked at here suggest that it doesn’t exist outside the ego, in the same way that the seeming reality of a dream ceases to exist the moment you wake up.

Most importantly, however, this suggests a way in which we can become free of time. Most of us feel that time is a kind of enemy. We feel that it’s running away from us and that we never have enough of it. We feel pressurised by its limits and deadliness. We spend so much time thinking about the future and the past that we forget to live in the present. But if time is created by the ego, then we can free ourselves from time permanently by “undoing” the ego. After all, this is the main aim of spiritual development. Through meditation, mindfulness, devotion, service and other spiritual practices, we slowly transcend the ego, and reorientate ourselves around a deeper spiritual self. In the process, the boundaries of time expand, like a river opening up to the ocean, until the illusion unravels completely, and we realise our true, timeless and eternal nature.

Steve Taylor Ph.D is a senior lecturer in Psychology at Leeds Metropolitan University, UK. He is the author of Back to Sanity: Healing the Madness of Our Minds and The Fall: The Insanity of the Ego in Human History and the Dawning of A New Era.