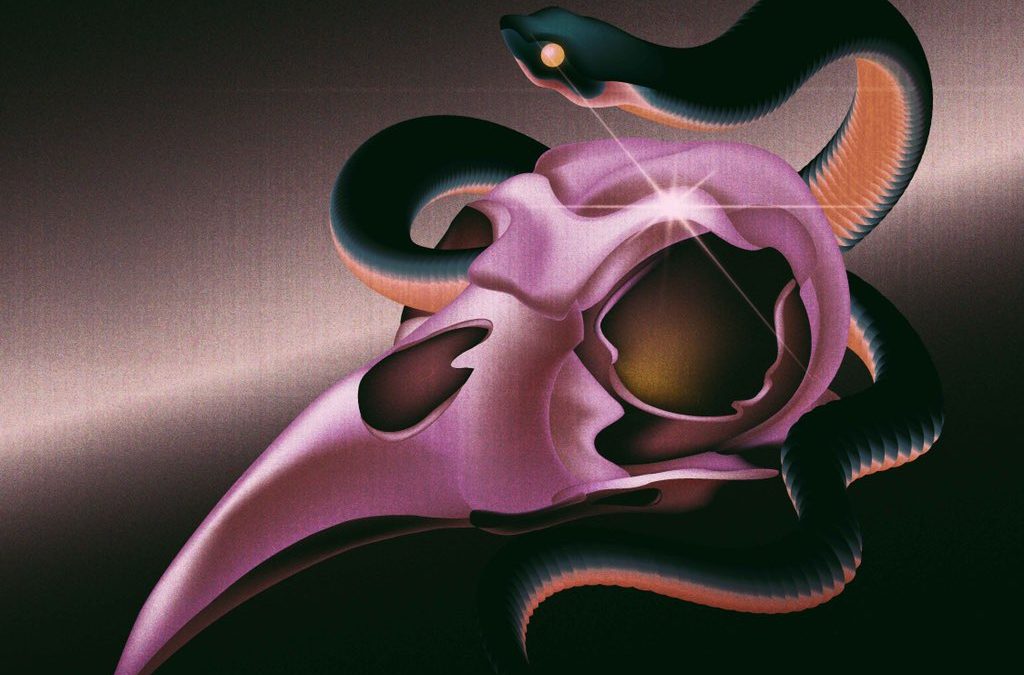 “Those who cling to life die, and those who defy death live.” ~Kenshin

Trickster is a psychosocial symbol for the chaotic and unpredictable side of human thought and behavior—what Jung called an archetype. In depth psychology it is contrasted with the Apollonian part of the mind that values order and control. A balance between these two aspects of the psyche is optimal.

But the power of inverted humor transforms the way the game is played. Trickster is allowed to trick the self into going Meta. It propels us into a bird’s eye view of the psyche, where all the archetypes are laid out below us ready to be plucked—masks just waiting to be donned.

Trickster therapy is existential reverse engineering. It’s psychosocial reconditioning. It’s hacking the self so thoroughly that we are finally able to embrace the fact that we are masks all the way down perceiving delusions all the way up.

Then it’s using all those masks and delusions as steppingstones into a heightened state of reality. It’s climbing out of the abyss of Ego and into the light of Soul. It’s using humility to ascend into humor—high humor, exalted humor. Humor so filled to bursting with courage and honor that it becomes wisdom.

Trickster therapy teaches us how to make better mistakes, how to increase momentum by not getting attached to anything, how to play the Infinite rather than the Finite Game, and how to transform the apocalypse into providence. Let’s break it down…

The Art of Making Better Mistakes:

“A man of genius makes no mistakes. His mistakes are volitional and are the portals of discovery.” ~James Joyce

At worst, you are an imperfect, hypocritical, fallible creature who’s prone to mistakes. At best, you are aware of it. Don and discard masks to get better at navigating the many layers of the self.

Become more self-aware through character arc awareness. You are a character in a story. Like all characters, you have an arc. Your mistakes are a big part of your character arc. Use them as props. Transform them into threshold guardians on the path toward heroism. Learn from them, subsume them, then make them a vital part of your muscle memory.

Intent matters. You can’t avoid making mistakes, but you can avoid laziness. Be proactive. Have a sense of play about it. Choose ambition over sloth and the mistakes you make will almost always be healthier.

Trickster therapy is also a way to create momentum while not getting attached. It’s a way of celebrating the path while also letting it go. It’s all about catch and release. Catch the bliss, then surrender it.

Inverse humor plants the seed of curiosity into the hardened ground of certainty so that courage and strength can manifest. In this sense curiosity is the bones of the body of wisdom.

Be curious. Feel it, love it, relish being in awe and overwhelmed with gratitude. Then let it go. Practice non-attachment. Surrender it to Cosmos. When you’re attached to nothing, you’re connected to everything.

Detachment is important because otherwise certainty will creep in and ruin your momentum. Curtail certainty by embracing curiosity. Fall in love with awe, and wonder, and whatever else should come from it (good or bad), then let it all go with respect, lightheartedness, and loving kindness.

Nonattachment and a good sense of humor is as close to true enlightenment as you’re ever going to get anyway. And that’s okay.

Playing the Infinite over the Finite Game:

“The Great Sorting Hat at the End of Time won’t give a damn which side we thought we were on—Rebel or Stormtrooper, Red Pill or Blue—but only on our intentions. Were we coming from a place of fear or love? Were we standing for all of us or only some of us? Were we playing for Team Finite, or Team Infinite?” ~Jamie Wheal

Trickster therapy teaches you how to play the Infinite Game.

In his book Finite and Infinite Games, James P. Carse breaks down reality into two types of games: Finite and Infinite. A finite game is played for the purpose of winning, even at the expense of play itself. An infinite game is played for the purpose of continuing play, for the sake of play itself. While there are endless finite games (chess, football, war, marriage, politics, religion) there is only one infinite game: the game of life.

Trickster therapy helps get us out of our own way. It gets us past the win-lose gamesmanship of tribalism and launches us into the win-win Infinite Game of metamorality. Where we can finally begin playing the game of life with the wise goal of continuous play rather than the prideful goal of merely winning, which implies losing.

Inverse humor teaches us how to go Meta, and stay there. Rather than get all wrapped up in the pride of winning, trickster therapy boosts our perspective, giving us a makeshift Astronaut Overview Effect where we can fit the small picture of our pride into the big picture of our wisdom and realize that the big picture is almost always more important.

Indeed. In the Game of Life, keeping the game in play matters more than winning.

“Write hard and clear about what hurts.” ~Ernest Hemingway

Through the mirror of the Trickster, we see how the apocalypse is less of an ending and more of a beginning. Less fire and brimstone and more irony and whetstones.

Through inverse humor, we’re better able to embrace the apocalypse. Not as a chaotic finale, but as a curious unveiling. As a revelation, as something to behold and be in awe over. As something to transform into providence.

So the world is falling apart. So what? Do your best with what you can control. Then have a laugh at what you can’t. Maybe it’s for the best. Maybe things need to fall apart so that they can come back together again even stronger than before. Or maybe not.

Either way, you’ll have your sense of humor as you take it all in stride. You’ll have your trickster archetype tricking you into a glass-is-half-full way of looking at it all.

At the end of the day, transforming the apocalypse into providence is the ultimate life hack.

This article () was originally created and published by Self-inflicted Philosophy and is printed here under a Creative Commons license with attribution to Gary Z McGee and self-inflictedphilosophy.com. It may be re-posted freely with proper attribution, author bio, and this statement of copyright.