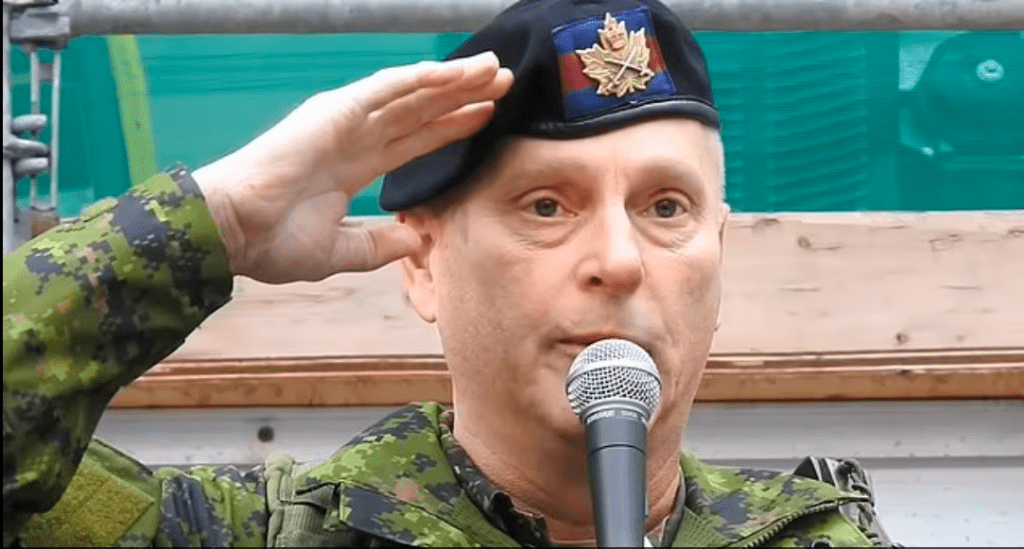 The Canadian Armed Forces are once again targeting one of their high-ranking officers who has spoken out against government-ordered mandates and authoritarian restrictions. Canada is the latest left-wing government to target military or police officers defending their nation’s constitution.

Canadian Major Stephen Chledowski
A powerful video by Canadian Army Major Stephen Chledowski, in uniform, appeared on social media Thursday, as thousands of citizens remain in Ottawa for the Truckers Freedom Convoy. It also came as massive numbers of serving military personnel faced the threat of forced removal from the Armed Forces for refusing to be injected with the controversial mRNA gene therapy.

In the video transcribed by RAIR Foundation USA, Maj. Chledowski describes himself as a father, a soldier of nearly 21 years, and a veteran of Afghanistan. The unvaccinated soldier professed his love and commitment to the people of Canada, their human rights, freedoms, and bodily autonomy throughout his almost seven-minute speech on YouTube before they removed it.

The left-wing media immediately seized on the video, painting Maj. Chledowski as an extremist who is working against his government. On the contrary, the military hero called on his government leaders to stop stripping Canadian citizens of the freedoms that he fought to protect. Furthermore, he encouraged others who vowed to protect and honor the Canadian Charter of Rights and Freedoms as well as other signed International Human Rights Agreements” to remember their oath.

Good day, folks; my name is Major Stephen Chledowshi. I have served Canada in the Canadian armed forces for 20 plus years.

I hold a first-class honors degree in political science, and I have held several army command positions. I have an urgent message for all Canadians.

For nearly two years, our own elected government officials have been using the bullying tactics of fear, intimidation, coercion, and financial and physical violence against us to gain compliance for certain repeated medical procedures.

We tell our children that bullying is wrong. We know it to be so yet, we allow our leaders to do this to us. They have knowingly and repeatedly violated the highest laws of the land in the Canadian Charter of rights and Freedoms as well as other signed International Human Rights Agreements.

Canadians have been lulled into believing that the same government that suppresses your freedoms in the name of safety will one day just reward you back with your freedoms. If you just comply to ever-changing rules and health orders. That, folks, is the very definition of tyranny, not democracy.

Humans are inherently free; kings and queens and government cronies can give you can’t give you your basic human rights; they are naturally yours. They can’t be given; they can’t be taken; they can only be suppressed. In the Charter of Rights and Freedoms, Queen Elizabeth is recognizing in law are fundamental freedoms. The federal and provincial governments of Canada have chosen through a well-planned and orchestrated set of measures to trick and fool and scare you, the very people who elected them and pay their salaries, into complying with the suppression of our basic human rights. They have knowingly betrayed you and me under the lie of safety.

This past Remembrance Day, as I stood in front of the military cenotaph in Fredericton to honor my comrades who gave their lives for others freedom, I overheard the premier of New Brunswick, Premier Higgs, and our member of Parliament Jenica Atwin tell members of the public how special it was that these brave members of the military gave their lives for their freedom. That same freedom that these very liars and deceivers are actively working right now to suppress.

I stood there a soldier of nearly 21 years as a senior officer in the Canadian army, as a veteran of Afghanistan participating in Operation Medusa, the largest combat operation for Canada since the Korean War – where I watched my own brave comrades fight and get injured and die. But I also stood there as a person who hasn’t taken the Covid-19 injection.

The irony so even though I serve this country, and it has been an honor to do so, an absolute honor like many thousands of Canadians who choose body autonomy and pro-choice, I am unable to share in the same privileges now like, eating at a restaurant going out in public to an event or even traveling across provinces to see my child. This is happening to many others; these government traitors to freedom are suppressing the rights of the very people they claim to honor, and it made me sick to my stomach.

These Canadian governments are now focused on our children with a medical genetic therapy proven by repeated medical journals/studies not to prevent Covid infections nor prevent its transmission to others. For our children, serious illness and death are non-existent from Covid-19 unless your child is chronically unhealthy to begin with. Yet, the toxin in this injection will have serious, life-damaging, permanent effects on your child’s health immunity. The fact of natural T-Cell and DNA damage also came to light recently by medical scientist studies. I am calling on the medical community to put an immediate halt on children’s injections until the Canadian public can receive accurate, truthful data from these Covid injection injuries that have already occurred.

The Canadian public has a right to be able to make informed medical choices, especially for little children. To tell them repeatedly it is safe and effective and not give them that choice is a crime, and it’s also genocide.

The media and government must put an immediate halt to all scientific medical censorship and the silencing of health professionals who do not comply with your agenda, as well as hear from Covid injury victims. The Canadian public has a right to hear from those in our communities and families who have been injured by this procedure.

I am calling on my military and police comrades, all of you, all of us, who have sworn a personal oath to protect our family, our friends, and our communities, to now stand up and protect your loved ones against this government forced medical tyranny.

You chose to serve because you wanted to give back to your community, and instead, the government has turned your love for community and your loyalty against you, and you are now a weapon against the very people you love. Brothers and sisters, you can’t be forever for forever changing industry-government measures which use fear and violence and also be for your loved ones and for freedom. You have to choose; I am asking you to choose your family and your community. This is why you serve; this is your moment to be a hero for your loved ones. They deserve the truth; they deserve to be protected.

May God forever bless the free citizens of Canada.