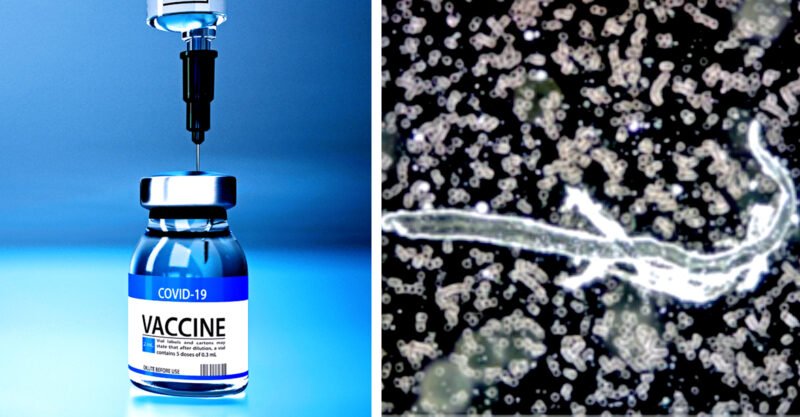 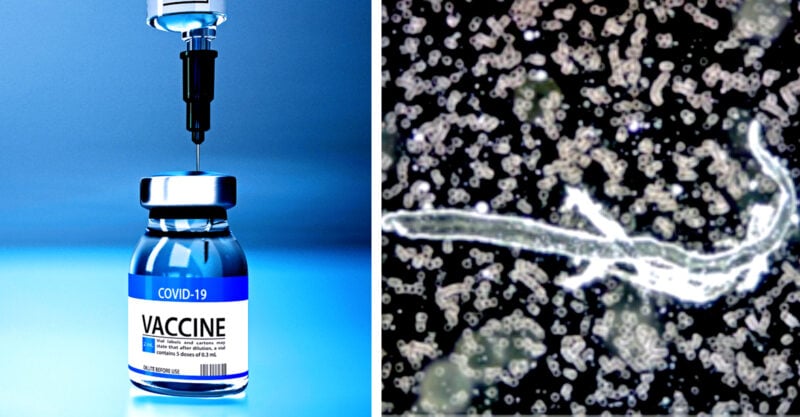 The image on the right illustrates the variety of unusual phenomena and objects found in the blood of subjects vaccinated with Comirnaty BioNTech/Pfizer. Image credit: Helen Krenn.

The Working Group for COVID Vaccine Analysis says that some of the toxic elements found inside the AstraZeneca, Pfizer and Moderna vaccine vials were not listed in the ingredient lists from the manufacturers.

The following metallic elements were found in the vaccines:

These substances, furthermore, “are visible under the dark-field microscope as distinctive and complex structures of different sizes, can only partially be explained as a result of crystallization or decomposition processes, [and] cannot be explained as contamination from the manufacturing process,” the researchers found.

They declared the findings as preliminary.

The findings “build on the work of other researchers in the international community who have described similar findings, such as Dr. Young, Dr. Nagase, Dr. Botha, Dr. Flemming, Dr. Robert Wakeling and Dr. Noak,” Dr. Janci Lindsay, Ph.D., a toxicologist not involved in the study, told The Epoch Times.

“The number and consistency of the allegations of contamination alone, coupled with the eerie silence from global safety and regulatory bodies, is troublesome and perplexing in terms of ‘transparency’ and continued allegations by these bodies that the genetic vaccines are ‘safe,’” Lindsay added.

Comparison of crystals in the blood and in the vaccine; on the left, crystalline formations are found in the blood of test subjects vaccinated with Comirnaty (BioNTech/Pfizer), the images on the right show that these types of crystals are also found in Comirnaty vaccines. Image credit: Helen Krenn

“We had submitted it to the participants of the government and further addresses from newspapers with the platform open-debate.eu, only in Germany, Austria and Suisse,” Krenn told The Epoch Times.

Two other important findings were that blood samples from the vaccinated had “marked changes” and that more side effects were observed in proportion to “the stability of the envelope of lipid nanoparticles.”

A lipid nanoparticle is an extremely small particle, a fat-soluble membrane that is the cargo of the messenger RNA (mRNA).

The findings of acute and chronic physiological changes to the blood of those inoculated with the vaccines, consistently discerned via AI software, “also echoes the findings of many other researchers and support the contentions of contamination and/or adulteration,” Lindsay said.

“We have established that the COVID-19 vaccines consistently contain, in addition to contaminants, substances the purpose of which we are unable to determine,” their study says.

The group consists of 60 members, including physicians, physicists, chemists, microbiologists and alternative health practitioners, supported by lawyers and psychologists.

The analysts explain that they have been cooperating with other groups in different countries that have been executing similar investigations and have obtained results consistent with their own.

“The results from our analysis of the vaccines can, consequently, be regarded as cross-validated,” the summary report of their findings states.

“It should be acknowledged of course that [German Working Group’s] work is described as ‘Preliminary Findings,’ not yet published in a peer-reviewed journal and that chain of custody as well as the identity of many of these scientists is unknown.”

“However, in this heavily charged and censored climate when it comes to any challenges to the ‘safety and efficacy’ of the genetic vaccines, I myself can attest to the difficulties in conducting the basic research, much less publishing that same research in a peer-reviewed journal, in order to get at these questions as well as disseminate the findings,” Lindsay said.

Astra Zeneca, Moderna, Pfizer and J&J did not respond to a request for comment.

Reprinted with permission from The Epoch Times.

The Epoch Times’ mission is to bring a truthful view of the world free from the influence of any government, corporation or political party.

Children’s Health Defense® is a 501(c)(3) non-profit organization. Our mission is to end childhood health epidemics by working aggressively to eliminate harmful exposures, hold those responsible accountable, and to establish safeguards to prevent future harm.