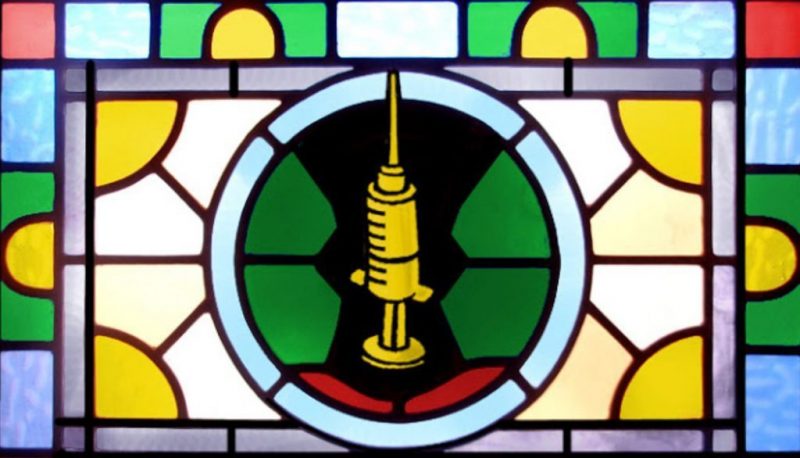 We begin with this: “Administration of KMV (killed measles vaccine) apparently set in motion an aberrant immunologic response that not only failed to protect children against natural measles, but resulted in heightened susceptibility.” JAMA Aug. 22, 1980, vol. 244, p. 804, Vincent Fulginiti and Ray Helfer. The authors indicate that such children can come down with “an often severe, atypical form of measles. Atypical measles is characterized by fever, headache… and a diverse rash (which)… may consist of a mixture of macules, papules, vesicles, and pustules…”

In other words, the measles vaccine can create a worse form of measles. This is not the normal form of the illness, from which children routinely recover with the bonus of lifetime immunity. No, this is a severe, atypical, dangerous, synthetic, vaccine-induced disease.

Translation: Measles occurring in infants—which is unusual and dangerous—is more likely to occur when the mother has been vaccinated against measles. Why? Because she no longer passes down, to her child, the natural components of immunity to measles.

This stunning finding can apply across the board, for all vaccines and all childhood illnesses.

Vaccinated mothers, who would ordinarily pass down natural immune factors to their babies, often don’t.

The vaccinators are creating a synthetic world of pretended immunity. And they want the global population to live inside that bubble—and suffer the consequences.

Medical experts have spewed a great deal of nonsense promoting how serious childhood diseases are. This is an attempt to refute centuries of evidence showing children recover nicely from these illnesses and thus acquire lifetime immunity.

The “seriousness” of the diseases, when they are serious, results from two factors: vaccinated mothers, and a general weakness of children’s immune systems. And that weakness results from sub-standard nutrition and a lack of nutritious breast-feeding.

Of course, breast feeding isn’t going to be naturally nutritious if the mother has been previously loaded with vaccines. It’s a vicious circle.

And remember this: no amount of vaccines is going to solve tremendously sub-standard childhood nutrition.

Claiming that undernourished children must be vaccinated up to their eyeballs—as “substitute protection” against disease—is an egregious and despicable lie.

The vaccine establishment is fully aware of what I’m discussing here, and it has covered it up.

There is no substitute for natural immunity derived from good nutrition.

Finally, if you revisit the first quote in this article, you’ll see another factor at work. The measles vaccine that paves the way for “severe, atypical” measles in children? The vaccine could be falsely exonerated on the grounds that the symptoms which develop in children don’t add up to measles at all. What these children have doesn’t look like measles—

And therein lies one of the greatest secrets about all vaccines. They appear to wipe out diseases, because, after vaccination, the signs and symptoms ordinarily associated with those diseases often don’t occur.

Instead, the old symptoms are altered or don’t appear at all. Therefore, medical experts can claim that mumps or measles or pertussis or diphtheria have been eliminated from the population—when in fact what is happening is the emergence of vaccine-induced disease with different symptoms.

And those symptoms are given different disease-names.

Vaccinated children become more ill than they would have, and children die. But it doesn’t matter for the sellers and enforcers of vaccines, because they can say, “Look, vaccines are extraordinarily successful wherever they’re given; they wipe out diseases.”

They just transfer the pictures of symptoms.

And they cut off the population from natural and powerful immunity, the very same immunity that, along with improved nutrition, better basic sanitation, and a higher standard of living, made many serious diseases into light illnesses.

It’s all a shell game. If the vaccinators confessed, they would say something like this:

“Okay folks, here’s what we do. We give the mother and her baby a shot against Disease A. Disease A is a set of recognizable symptoms. After vaccination, that set of symptoms will occur far less often. Instead, a new set of far more dangerous symptoms will occur. We’ll call those symptoms Disease B. And we’ll say Disease A has been wiped out…”

This shell game is played with human lives sacrificed on the altar of profits, and the creation of more debilitation and death.

(To read about Jon’s collection, Power Outside The Matrix, click here.)

The author of three explosive collections, THE MATRIX REVEALED, EXIT FROM THE MATRIX, and POWER OUTSIDE THE MATRIX, Jon was a candidate for a US Congressional seat in the 29thDistrict of California. He maintains a consulting practice for private clients, the purpose of which is the expansion of personal creative power. Nominated for a Pulitzer Prize, he has worked as an investigative reporter for 30 years, writing articles on politics, medicine, and health for CBS Healthwatch, LA Weekly, Spin Magazine, Stern, and other newspapers and magazines in the US and Europe. Jon has delivered lectures and seminars on global politics, health, logic, and creative power to audiences around the world. You can sign up for his freeNoMoreFakeNews emails here or his freeOutsideTheRealityMachine emails here.