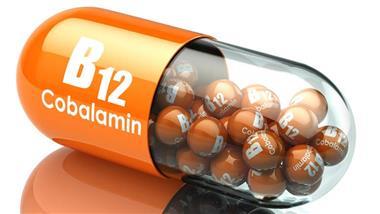 A significant portion of Americans have some type of vitamin deficiency, one of which is vitamin B12.1 Vitamin B12 (cobalamin) is a water-soluble vitamin, which is vital for optimal health. Unfortunately, many of the symptoms of deficiency mimic other health conditions and so it is often considered last in a variety of health issues.

Vitamin B12 is an essential vitamin, which means your body cannot make it. Instead, you must consume an average of 2.4 micrograms each day from food or supplements.3 While it’s found in a wide variety of animal foods,4 some experts estimate that 3.2% of people over age 50 are deficient in vitamin B12, and another possible 20% have a borderline deficiency5 and others estimate that up to 43% of older adults may be deficient.6

Although it affects a significant number of people, particularly the elderly and those in developing countries, it is one of the most overlooked conditions.7 Vitamin B12 plays a vital role in many functions throughout your body. For example, it is important to create blood cells and keep nerve cells healthy.

Vitamin B12 also helps prevent megaloblastic anemia.8 The vitamin is necessary for cardiovascular and cognitive health, and it helps to produce hemoglobin, improve nerve strength and regulate homocysteine levels.9,10,11

Homocysteine is an amino acid produced by the body, which in large amounts can increase the risk of heart attack and stroke. One function of vitamin B12 is to help break down homocysteine in your blood.12 What symptoms might be a warning that you or a loved one may have a vitamin B12 deficiency?

Symptoms of Vitamin B12 Deficiency Are Not Diagnostic

The most common cause of megaloblastic anemia is a deficiency in vitamin B12.13 In this condition the bone marrow produces large and immature red blood cells, which leads to fatigue, lightheadedness and skin pallor. Other symptoms of vitamin B12 deficiency include:14,15,16,17

Although an experienced health care provider may recognize symptoms and theorize that you have a deficiency, testing is required to confirm the condition. Certain groups of people are at greater risk of developing a vitamin B12 deficiency than others. These groups of people have difficulty absorbing vitamin B12 from the food they eat, or they don’t get enough in their diet.19

To absorb the vitamin your body goes through a two-step process. First, hydrochloric acid in your stomach separates the vitamin from protein in the food source. Next, vitamin B12 attaches with a protein your stomach makes — called intrinsic factor — so it can be absorbed into the body.

In certain conditions, even people taking supplements cannot absorb the vitamin since they don’t make enough intrinsic factor to bind with the vitamin so it can be absorbed. You may have a higher risk of developing a vitamin B12 deficiency if you are/have:20,21

Low Levels of B12 May Be Missed

Unless you have recognizable signs of vitamin B12 deficiency, your physician may not think to test your level. Yet, even when tested, serum norms in the U.S. may be suboptimal. Additionally, individual requirements can vary, so you may have symptoms of deficiency even when your serum levels appear to be in the normal range.25

Serum levels can also be altered by the presence or absence of binding proteins. Some serum tests identify inactive forms of cobalamin, which masks deficiencies of the active form of the vitamin.

Instead, researchers recommended evaluating deficiency through the measurement of metabolites, including homocysteine, or levels of cobalamin bound to holo-transcobalamin, which more accurately represents the active form of the vitamin.

Researchers from this study and other experts26 suggest several other ways of more accurately predicting potential deficiency. One method is to look at the spectrum of metabolic abnormalities and clinical symptoms as compared against homocysteine and MMA levels.27

B12 Deficiency May Be an Underestimated Cause of Dementia

Some of the symptoms of vitamin B12 deficiency are mental health disorders, including depression. One study28 of 89 children and adolescents with depression found those who are depressed had “clearly low” levels of vitamin B12 and vitamin D and their homocysteine levels were “remarkably high.”

Another study29 engaged 199 depressed adults who received vitamin B12 supplementation with antidepressants and exhibited significantly improved symptoms. In addition to depression, low levels of vitamin B12 have been associated with minimal cognitive impairment and dementia and may be an option to improve patient outcomes.30

One study31 characterized the cognitive pattern of elderly adults who had vitamin B12 deficiency and compared it against those who had Alzheimer’s disease. Their results suggested a distinctly different pattern in both diseases.

The researchers found that of the 19 individuals who had low levels of vitamin B12, 12 improved with treatment and seven continued to deteriorate. The researchers went on to analyze the initial neuropsychological evaluation of the two groups of patients and found there was a different profile in those who had a form of dementia that responded to vitamin B12 supplementation and those who did not.

The scientists discovered memory pattern challenges were also different, leading them to believe that vitamin B12 deficiency may be differentiated from Alzheimer’s disease with a thorough psychological evaluation.32

Scientists recognize that the hematological and neuropsychiatric effects of vitamin B12 deficiency may not occur systematically. The true incidence of neuropsychiatric symptoms is unknown. However, depending on the population being studied and the definition of vitamin B12 deficiency used by the researchers, the rate can vary between 4% and 50%.33

Testing for Vitamin B12 Deficiency With Cognitive Decline

As early as 2009, Dr. Ronald Devere, then-director of the taste and smell disorders clinic and Alzheimer’s disease and memory disorders center in Austin, Texas, recommended guidelines for evaluating vitamin B12, folate, MMA and homocysteine blood levels to discern those who may respond to vitamin B12 or folate supplementation to reduce cognitive impairment.34

He recommended continuing to use vitamin B12 and folate serum levels in those who present with changes in cognitive functioning. In addition, he set limits for measuring MMA and homocysteine to determine if serum vitamin B12 was an accurate reflection of the vitamin level.

In one paper35 published in the Journal of Neuropsychiatry, the scientists recognized only one-third of individuals with low levels of vitamin B12 receive adequate supplementation. The researchers warned that in the early phases of replacement therapy in patients who have megaloblastic anemia, clinicians should watch for falling potassium levels that may result in early death.

Administering folate in conjunction with vitamin B12 supplementation may help partially correct megaloblastic anemia. On the other hand, they suggest it could aggravate encephalopathy that may be present with vitamin B12 deficiency.

The doctors suggest that the devastating impact of dementia on the individual and their family warrants testing for vitamin B12 deficiency and potentially supplementation, since deficiency in the elderly is a common condition and modern diagnostic tools in addition to neurophysiological parameters may help improve cognitive performance.

B Vitamins May Help Prevent the Worst COVID Outcomes

Vitamin B12 belongs to a complex of B vitamins which researchers’ postulate may significantly improve COVID-19 outcomes. One cohort study36,37 of 43 patients diagnosed with COVID-19 admitted to the Singapore General Hospital in early 2020 analyzed the oral administration of vitamin D3, magnesium and vitamin B12, collectively called DMB, against a control group who did not receive DMB therapy.

The B vitamins play a significant role in a healthy functioning immune system. Additionally, the same group of vitamins play a role in reducing the severe effects of COVID-19,38 including roles in viral replication, cytokines storm induction, adaptive immunity and hypercoagulability.

In one paper39 published in the journal Maturitas, scientists detailed the various routes that each of the B vitamin may affect in the management of COVID-19 symptoms. Specifically for vitamin B12, a deficiency can increase an inflammatory response and raise homocysteine levels.

These actions may trigger endothelial dysfunction and activate a platelet and coagulation cascade that can potentially lead to blood clots. For further explanation see “B Vitamins Might Help Prevent Worst COVID-19 Outcomes.”

Vitamin B12 is found almost exclusively in animal tissue. This includes foods like beef, lamb, venison, poultry, eggs and dairy products. Nutritional yeast is high in B12 and recommended for vegetarians and vegans. Two tablespoons provide 7.8 micrograms.40

A sublingual under the tongue fine mist spray or vitamin B12 injections are also effective as they allow the large molecule to be absorbed directly into your bloodstream and bypasses the need for hydrochloric acid and intrinsic factor.