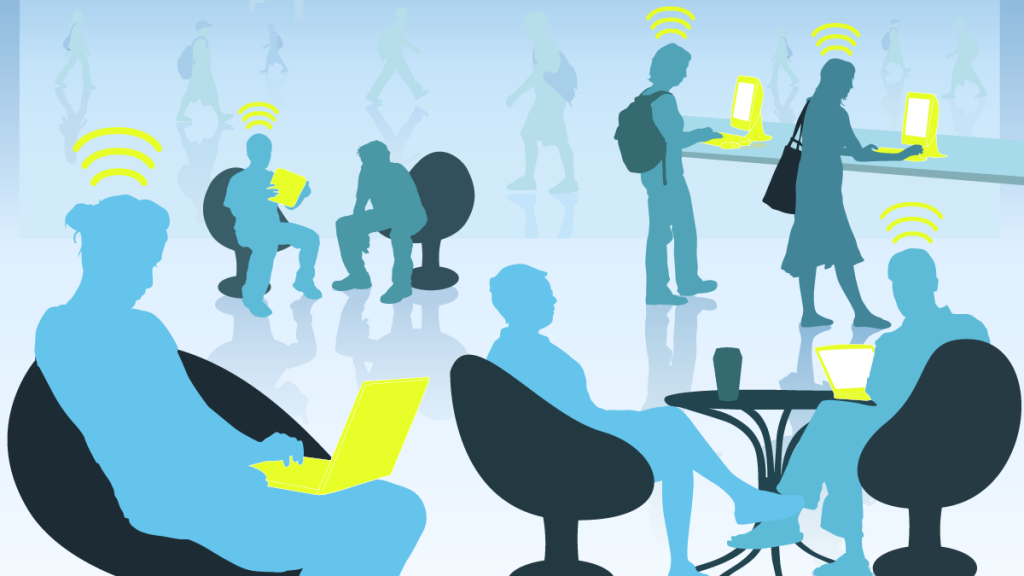 Wi-Fi (Wireless Fidelity) is everywhere: Planes, trains, schools, workplaces, cafés, and even doctors’ offices, which I find quite unfathomable, since those microwave frequencies are harmful to the brain, i.e., one of the non-thermal radiation wave adverse health effects the industry’s associations, e. g., ICNIRP, deny but falsely promote as safe, in my opinion.

Microwave energies are in the gigahertz (GHz) range—think microwave ovens! Would you leave your microwave oven door open while it is cooking dinner? Then, apply that same logic to the exposures you experience in all the places stated in the paragraph above. We are living in a sea of unfettered microwave exposures which are not safe for the human brain—especially in developing fetuses and young children, regardless of what vested interests tell you about the ‘science’.

First and foremost, consumers need to understand most ‘smart’ technologies and appliances operate using some form or range of microwaves, hence the quest for 5G in the sky to provide faster service, which may be only one reason of many for the push to ‘fry’ brains, I think.

As consumers, we need to reexamine our ‘second nature’ habits regarding Wi-Fi technology, I offer.

Demographics document pedestrian deaths are increasing dramatically and attributed to the use of smart phones while walking on city streets, crossing into traffic and not paying attention to traffic patterns due to being absorbed in texting or some electronic device activity.

Recently, I wrote about newly published scientific studies and the effects of EMFs/RFs produced by microwave energies; see “Science Speaks Out About Electromagnetic Frequencies.”

One of the recently published papers cited is “The effect of Wi-Fi EMF on object recognition tasks in male rats” Hassanshahi A, Shafeie SA, Fatemi I, Hassanshahi E, Allahtavakoli M, Shabani M, Roohbakhsh A, Shamsizadeh A. The effect of Wi-Fi electromagnetic waves in unimodal and multimodal object recognition tasks in male rats. Neurol Sci. 2017 Mar 22. doi: 10.1007/s10072-017-2920-y. [Epub ahead of print], which has remarkable findings that must be considered as to how they apply to human brains and behavioral tendencies, including interferences with or lack thereof, in view of Wi-Fi gigahertz EMF (electromagnetic frequency) exposures.

This truly is “canary in the coal mine” stuff, which needs to be scrutinized more carefully by all segments of society: regulatory agencies, especially the FCC in Washington, DC; the medical profession, which should not be overwhelmed by the pontifications of skewed and obsolete microwave science of the 1900s as ‘safe’; school districts in their fervor to supply ‘state-of-the-art’ education for students by exposing them to Wi-Fi in classrooms only to be magnified by the number of computers tying into and amplifying exposures; states utility commissions, who need to become proficient in Wi-Fi adverse health effects, aka non-thermal wave adverse health effects, from ZigBee radio transmitters in electric, natural gas and water AMI Smart Meters; and consumers who are ‘addicted’ to quick-access Internet, iPhone, and all the gadgets powered by Wi-Fi.

Why should everyone be concerned about Wi-Fi and GHz? Well, in the Hassanshahi et al article mentioned above, the rats developed cognition problems from Wi-Fi exposure, which should not be taken lightly or pushed under medical or scientific carpets!

Quoting from the Abstract of that published paper:

Considering the recent reports about some hazardous effects of Wi-Fi signals on the nervous system, this study aimed to investigate the effect of 2.4 GHz Wi-Fi radiation on multisensory integration in rats.

In conclusion, results of this study showed that chronic exposure to Wi-Fi electromagnetic waves might impair both unimodal and cross-modal encoding of information. [1]

That means the poor rats brains became addled. What are those laboratory rats telling us? As a society, we seem to have more problems with cognition, i.e., ADD, ADHD, Autism Spectrum Disorder, Alzheimer’s disease, plus various other forms of dementia. Here is the National Institute on Aging’s website on “Types of Dementia.”

Consumers really need to rethink and examine the ultimate repercussions of constant exposure to unseen non-ionizing radiation waves impacting our central nervous system, brain and cognition. Is losing one’s mental capabilities worth the ‘convenience’ of tech-gadgets and their slick merchandising campaigns constantly foisted upon children and adults to buy more electronic ‘toys’?

Catherine J Frompovich (website) is a retired natural nutritionist who earned advanced degrees in Nutrition and Holistic Health Sciences, Certification in Orthomolecular Theory and Practice plus Paralegal Studies. Her work has been published in national and airline magazines since the early 1980s. Catherine authored numerous books on health issues along with co-authoring papers and monographs with physicians, nurses, and holistic healthcare professionals. She has been a consumer healthcare researcher 35 years and counting.

Her 2012 book A Cancer Answer, Holistic BREAST Cancer Management, A Guide to Effective & Non-Toxic Treatments, is available on Amazon.com and as a Kindle eBook.

Two of Catherine’s more recent books on Amazon.com are Our Chemical Lives And The Hijacking Of Our DNA, A Probe Into What’s Probably Making Us Sick (2009) and Lord, How Can I Make It Through Grieving My Loss, An Inspirational Guide Through the Grieving Process (2008)