Why Everything Is Fucked 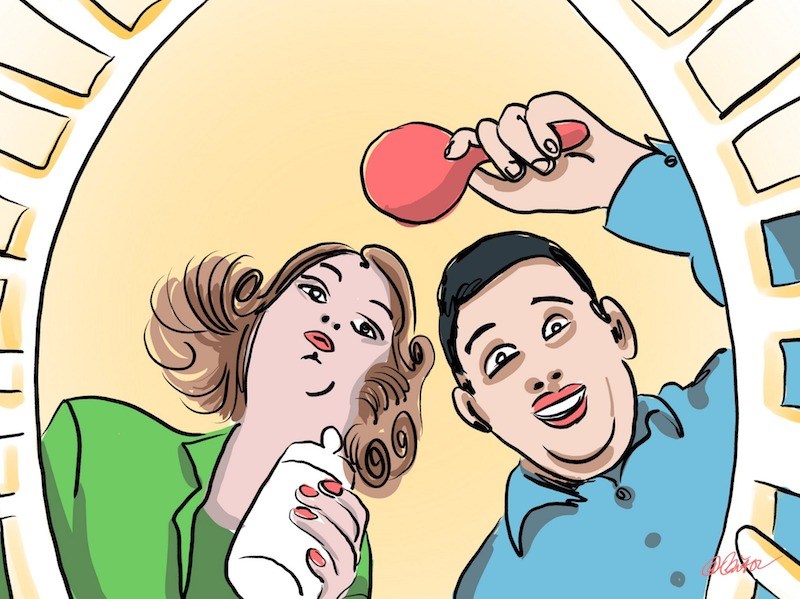 Why Everything Is Fucked

We all slid out of the womb an itty bitty helpless information sponge into a world full of mentally ill giants who couldn’t wait to fill our tiny skulls with all of their inner demons. And now everything, understandably, is fucked.

That’s basically our whole entire situation in a nutshell. You can add on as many extra details as you like–plutocracy, corruption, mass media propaganda, billionaire wine cave fundraisers, whatever–but ultimately our plight is due to the fact that every single human showed up on this planet completely helpless and knowing nothing, forced to trust crazy giants to give them the grand introductory tour.

Why were those giants crazy? Well you see, they got here the same way you did: small, slippery and completely clueless, surrounded by enormous gibbering lunatics who were all in a mad rush to teach them how to be insane.

It’s a grand old tradition of ours, ultimately stretching all the way back to our own evolutionary birth in this world and the emergence of a massive cerebral cortex in a mammal who up until that point had been primarily concerned with sneaking in a snack and a quick shag in between mad sprints away from sharp-fanged predators. This newfound capacity for complex abstract thought burst onto this frantic, confusing scene and was quickly seized and manipulated by the cleverer primates.

And thus human madness was born.

The most powerful early humans were the cleverest humans, the ones who understood how to use this new capacity for language and abstract thought to their own advantage. They realized that by simply saying something is true in a sufficiently confident way, they could persuade the less clever humans to treat it as true.

Those clever humans used this newfound ability to place themselves in charge, and to make a bunch of rules to be passed down from generation to generation proclaiming that the less powerful humans must submit to the more powerful humans. Over the generations these rules became more and more numerous and complex, weaving in moralism, codes of filial piety, and insane, power-serving religions glorifying meekness, obedience and poverty.

These power-serving rule sets were picked up and used to justify highly traumatizing behavior in the service of the powerful, from wars to genocides to institutionalized torture and brutal executions of the disobedient, and just within domestic power structures the institutionalized normalization of spousal rape and physical abuse in households all around the world.

That is your legacy. That is everyone’s legacy. Countless generations of cumulative madness, washed into the present moment on a current of eons of exploitation and senseless cruelty stretching all the way back to the dawn of our species on this planet.

This heritage of madness is funneled straight into our sponge-like brains from the moment we emerge from the womb and all the way through an extremely traumatic and confusing ordeal known as childhood, after which we are handed the keys to the world and told “You’re an adult now. You’re in charge. See if you can figure out how to run this place better than we did.”

We never stood a goddamn chance. None of us did. The deck was stacked against us long before we got here.

And now you get political commentators constantly railing on about “Gosh, if only we could get people to stop listening to their televisions and vote third party and read World Socialist Website and turn up to demonstrations and take back the power of the people from our oppressors, we could turn this thing around!” Not realizing that everyone else in their country went through the same traumatic, confusing ordeal that they went through at the beginning of their lives, the only difference being that most of them got a lot less lucky in sorting out reality from madness. And not realizing that they themselves are still quite mad.

This is ultimately the answer to every question about why things are fucked right now. Why does it seem like nothing changes no matter who wins the election? Why do the wars keep expanding instead of ending? Why is the news man always lying? Why are they locking up that white-haired fellow for publishing facts? Why are those nuclear superpowers hurtling closer toward direct confrontation? Why are the rainforests vanishing? Why are the whales dying? Why are the mass shootings increasing? Why is everyone so miserable?

Because every adult on this planet started off tiny, helpless, impressionable, and surrounded by gargantuan madmen, and it made it almost impossible to be sane. That’s why.

Notice I said “almost”. It is still possible to find one’s way into a relationship with reality that is guided by truth and untainted by madness, but you’ve got to start way, way, way back at the beginning and deeply re-examine even your most fundamental assumptions about what’s true and real. Because it turns out that while the mad giants gave us information that was very useful for interacting with other mad giants, it was almost entirely useless for learning how to navigate through life in a wise and truthful way.

And that’s what I’m pointing to here: it’s important to get clear on just how far back the crazy goes and how fundamentally interwoven it is with the situation in which we now find ourselves. If you begin with the assumption that our problem is simply due to humans not voting and mobilizing correctly in alignment with the correct ideology, you’ll miss the real obstacle entirely. You’ve got to zoom the camera out much, much further to see the full picture.

Can you become a deeply sane individual, untainted by your ancient heritage of madness? With a lot of work and uncompromising self-honesty you can.

Can all humans become deeply sane and untainted by their ancient heritage of madness? It would take a miracle. A whole lot of miracles. Billions, to be precise.

But then, I believe in miracles.

Thanks for reading! The best way to get around the internet censors and make sure you see the stuff I publish is to subscribe to the mailing list for my website, which will get you an email notification for everything I publish. My work is entirely reader-supported, so if you enjoyed this piece please consider sharing it around, liking me on Facebook, following my antics on Twitter, checking out my podcast on either Youtube, soundcloud, Apple podcasts or Spotify, following me on Steemit, throwing some money into my hat on Patreon or Paypal, purchasing some of my sweet merchandise, buying my new book Rogue Nation: Psychonautical Adventures With Caitlin Johnstone, or my previous book Woke: A Field Guide for Utopia Preppers. For more info on who I am, where I stand, and what I’m trying to do with this platform, click here. Everyone, racist platforms excluded, has my permission to republish or use any part of this work (or anything else I’ve written) in any way they like free of charge.