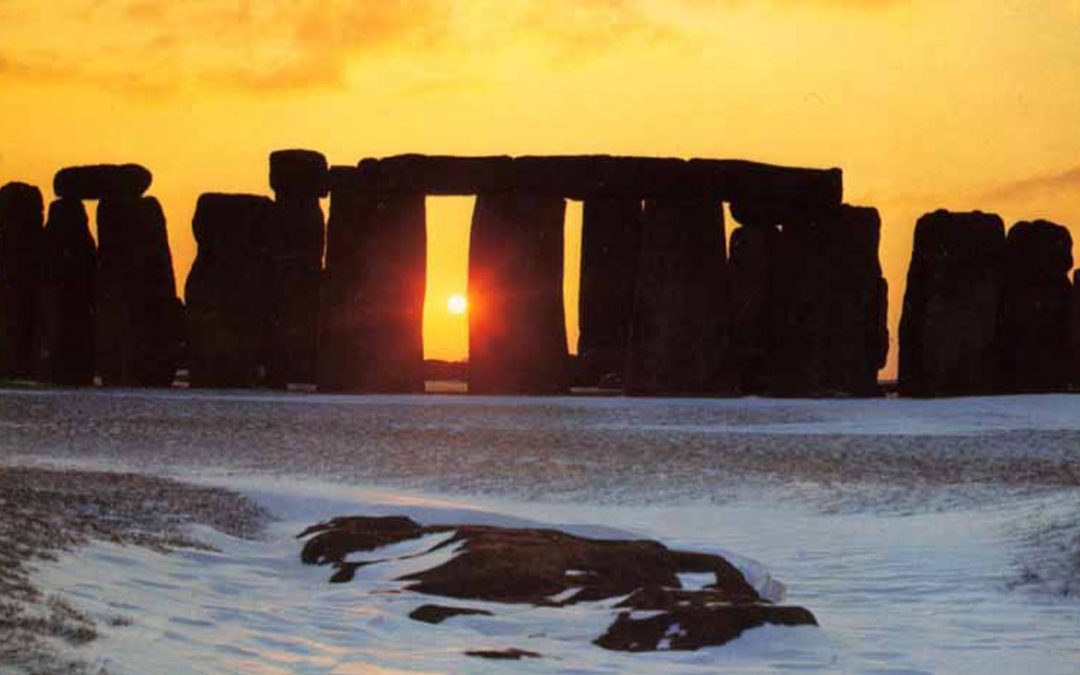 The winter solstice, To our ancestors this date held a magical attraction. Such was their reverence that they marked its coming in the land. No other time of year, has so many ancient monuments built in its honour. Newgrange, Maeshowe,Glastonbury tor, and even the most famous of them all Stonehenge,make up just a fraction of their number. Whilst such solar alignments can be found all over the world, No where are there so many or dating back so far as in Northern and western Europe.

These ancient monuments dating to the Neolithic are not only testament to the reverence our forebears held for this date, but as they still stand to this day, also testament to their craftsmanship.Thousands of tonnes of earth and stone were moved in their creation,With only stone and bone tools at hand, these monuments are a symbol of their devotion, and admiration for nature itself.

From our vantage point we can only imagine the spectacle of ceremony that took place at such sites. At Stonehenge we have evidence of thousands of folk arriving from places all over northern Europe to celebrate the majesty of this night. This at a time when tribal groups were little more than extended families. All gathering to see out the darkest night together and witness the rebirth of the Sun.

As it is a birth, we also find evidence of the mother. From the work of Bede, we get a mention of Mōdraniht, or Mothers night. Although Bede places this on Christmas eve, it is not unreasonable to assume that in pre christian times this would have been the day before midwinter, or even midwinter itself. Before the Sun would have been seen on land, it would first peek out from the great Oceans, again giving us omen of the birth,the sea here being akin to the amniotic waters.

For half a year the world had slowly been devoured by darkness. for Our forebears who were sustained mostly by farming, this meant whatever they had harvested in the autumn, was to a large extent all they had to see them through the coming darkness. With each passing day not only did the darkness eat away at the light, but they ate away at their supplies. We struggle to imagine the sense of foreboding that must of come with this. imagine looking into your children’s eyes after a poor harvest, knowing what was to come, what they would have to endure, and not knowing if they would make it……

This hardship may also be represented in other mythology associated with this time of year, the wild hunt. This procession of the dead often lead by a powerful figure of mythology, like king Arthur or Woden himself, was often seen as ominous omen to those who witnessed it. Given this event was said to occur in the dark of night in the middle of winter, only a man in distress or desperate state would be out in such inhospitable conditions. It is easy to imagine that man staring into his child’s starving eyes, would be driven to such desperation. Risking all for his beloved family on a dangerous hunt,where he was just as likely to be the prey as the predator.

The Symbology contained within this solar event, that of Darkness,danger and hope, is on a larger scale represented in our modern times. Who among us would argue that a darkness has not descended upon our world? That men driven by a spiritual hunger are loosing their minds trying to fill the void left by materialistic and nihilistic modern culture. In this desperation many have fallen victim to all manner of vices, falling deeper into the darkness of the spiritual abyss. Many of these

may not see the Suns return, but there is hope. I see some men venturing out into the darkness, not lost but with purpose. Driven by love, these men refuse to see their folk suffer, refuse to succumb to the darkness, to be corrupted by it, but to conquer it. Much like the neolithic man looking into his children’s eyes, they look into the eyes of their folk, and by their will make solemn oath and refuse to allow their demise.

Like the reddening of the sky before the Sun rises, I see the signs of the birth, of a new hope, a new light, a renewal of the ancient and glorious veneration of life itself. I see a new man dawning,ready and willing to start his ascent, to face his fears, his own darkness and like the Sun, drive it out.