With 79.4 Million Obese Citizens, the U.S. is Leading in Obesity

With 79.4 Million Obese Citizens, the U.S. is Leading in Obesity

A report in the New England Journal of Medicine revealed that 2.2 billion people worldwide suffer from health problems due to being overweight or obese. Oh, and the United States was the 3rd fattest country on Earth. [1]

Approximately 30% of the world’s population lives with excess body weight, and 10% of those individuals qualify as obese. People were classified as overweight if their body mass index (BMI) was between 25 and 29, while obesity was defined as having a BMI of 30 or over. [1]

For the study released just 2 years ago, the Global Burden of Disease 2015 Obesity Collaborators analyzed data on 68.5 million people to establish body weight trends from 1980 to 2015, and to get a more complete picture of the obesity crises’ effect on the world.

Seventy countries saw their obesity rates double since 1980, and the rates of people carrying unhealthy, excess weight has increased in almost all other nations. Overall, almost 108 million children are now considered obese, and over 600 million adults.

“Although the prevalence of obesity among children has been lower than among adults, the rate of increase in childhood obesity in many countries was greater than that of adults.”

The U.S. had the highest childhood obesity rate of the 100 most populated nations, with 12.7% of children classified as obese. The remaining top 5 included Saudi Arabia, Canada, the United Arab Emirates, and Chile. 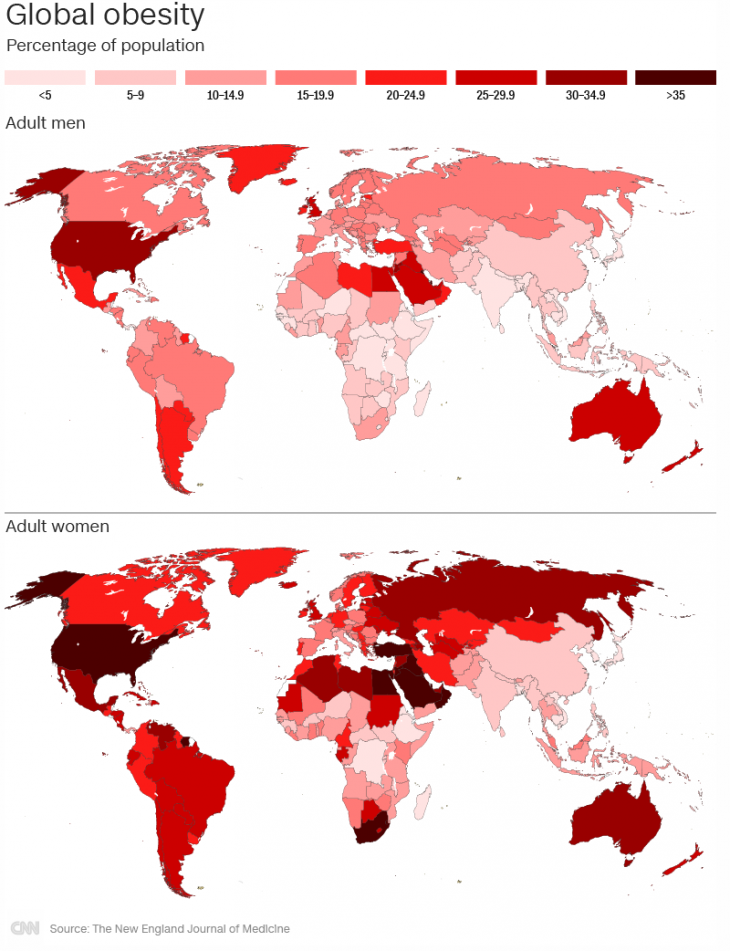 The researchers also found that weight-related illnesses, such as diabetes, cancer, and cardiovascular disease, had claimed the lives of 4 million people in 2015, and that number is only expected to rise.

“Excess body weight is one of the most challenging public health problems of our time, affecting nearly one in every three people. Over the past decade, numerous interventions have been evaluated, but very little evidence exists about their long-term effectiveness.

Over the next 10 years, we will closely with the U.N.’s Food and Agriculture Organization in monitoring and evaluating the progress of countries in controlling overweight and obesity. Moreover, we will share data and findings with scientists, policymakers, and other stakeholders seeking evidence-based strategies to address this problem.”

Why Are So Many People Battling Excess Weight?

Urbanization, poor diets, and reduced physical activity are believed to be the primary drivers behind increasing obesity rates. Though researchers found fewer obese children than adults, the rates at which their numbers increased was greater. That means today’s children will have lived more years with a high BMI. [2]

“This re-emphasizes what we already know about the obesity epidemic. But it raises the alarm that we may be facing a wave of obesity in the coming years across high and low-income countries.

We don’t really know what the long-term effects will be if exposed to high BMI over 20, 30, 40 years. It may be larger than we have already seen.”

What is the Root of Increasing Obesity Levels?

China, Saudi Arabia, and the United States are wealthy countries, but that didn’t seem to make a difference in the study. Obesity levels increased among all the nations studied, regardless of income.

“Changes in the food environment and food systems are probably major drivers. Increased availability, accessibility, and affordability of energy dense foods, along with intense marketing of such foods, could explain excess energy intake and weight gain among different populations.”

This is especially true for people who live in cities, which are often home to food deserts.

What is a food desert? It’s an area of the country where there are mini-marts on practically every street corner, but few or no supermarkets to speak of. Mini-marts offer snacks, sodas, candy, and lots of fattening prepared foods, but no fresh produce or other healthful foods. As of 2015, as many as 23.5 million people in the U.S. lived in food deserts.

Much of the time, people who grow up in a food desert know little about healthy eating, or how to prepare healthful foods. A lack of education is as much a problem as a lack of nourishing foods.

Read: Chance of Obesity, Diabetes Rises When McDonald’s is Nearby

Additionally, urbanization has led to reduced levels and opportunities for physical activity, though the authors said these are “unlikely to be major contributors.”

Whatever the cause, people who don’t take their weight seriously could be in for years of needless suffering and early death.

“The people who shrug off weight gain do so at their own risk – risk of cardiovascular disease, diabetes, cancer, and other life-threatening conditions.”

Weight of the Nation

POST WRITTEN BY  Mike Barrett:
Mike is the co-founder, editor, and researcher behind Natural Society. Studying the work of top natural health activists, and writing special reports for top 10 alternative health websites, Mike has written hundreds of articles and pages on how to obtain optimum wellness through natural health.